A UC San Francisco professor of biochemistry and biophysics has received Asia’s highest scientific honor, the 2014 Shaw Prize in Life Science and Medicine, for his groundbreaking discovery of a system that makes “life and death decisions” for the cell.

Peter Walter, PhD, who is also an investigator with the Howard Hughes Medical Institute, shares the prize with Kazutoshi Mori, PhD, a professor of biophysics at Kyoto University in Japan. They were jointly named winners of the award on Tuesday in an announcement by the Shaw Prize Foundation, in Hong Kong. 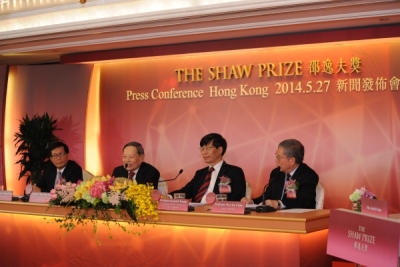 Shaw Prize council members get ready to announce the 2014 laureates at a news conference in Hong Kong on May 27. Photo courtesy of The Shaw Prize Foundation

The award acknowledges the scientists’ discovery of the so-called “unfolded protein response” of the cell’s endoplasmic reticulum, and its role in ensuring that proteins are properly constructed, especially when the cell’s quality control system is overwhelmed.

Because of their work, scientists now understand that when these basic systems malfunction, serious diseases can result, including cancer, type 2 diabetes and Alzheimer’s disease, as well as the more arcane eye disease retinitis pigmentosa.

“Peter Walter has received widespread acclaim for his discoveries of how the cell ensures that its fundamental building blocks are properly constructed and the role protein malformations play in disease,” said UCSF Interim Chancellor Sam Hawgood, MBBS. “His discovery with Professor Mori has altered the field of biochemistry and is a perfect example of the importance of basic research today, its impact on health, and importance for society.”

Controlling the Building Blocks of Life

Like cars or computers, cells need to have the right parts in the right places in order to work properly. But because cells are living machines, they are able to respond to changing conditions by assembling new parts in real time and directing them to their proper locations.

In the cell, those “new parts” are proteins, the building blocks of any organism. But when they are first made inside cells, they are in the form of simple, linear chains of amino acids known as polypeptides. Those chains must fold into proper, three-dimensional shapes before they can be sent off to do their job.

To undergo folding, these newly synthesized polypeptide chains enter a maze-like structure called the endoplasmic reticulum (ER), which serves as a checkpoint: Well-folded proteins exit the ER and are shuttled to their destinations, but malformed proteins, which are a hallmark of many serious diseases, are targeted for destruction.

Working with yeast in his UCSF laboratory, Walter and colleagues discovered how this process is kept in balance by a molecular signaling pathway known as the unfolded protein response, or UPR.

As Walter put it, “The unfolded protein response makes life and death decisions for the cell.”

The UPR that Walter discovered in yeast is also present in humans, which has led other researchers to build on Walter’s work and identify two additional, complementary UPR signaling pathways at work in human cells.

Walter, 59, joined the UCSF faculty in 1983 and has been an HHMI investigator since 1997. He is the recipient of some of the most esteemed prizes in biomedical science, including the Paul Ehrlich and Ludwig Darmstaedter Prize (2012), the Otto Warburg Medal (2011), the Gairdner International Award (2009), the E.B. Wilson Medal (2009), the Stein and Moore Award (2009), and the Wiley Prize in Biomedical Sciences (2005). He is a member of the National Academy of Sciences, the American Academy of Arts and Sciences, and the European Molecular Biology Organization.

One of the World’s Top Scientific Honors

Often considered the “Nobel Prize of Asia,” the Shaw prize honors individuals who have achieved significant breakthroughs in academic and scientific research or applications, and whose work has resulted in a positive and profound impact on mankind.

UCSF Winners of the Shaw Prize

David Julius, PhD, won for his discoveries of molecular mechanisms by which the skin senses painful stimuli and temperature and produces pain hypersensitivity. Read more

The Shaw Prize, which was launched in November 2002 and first awarded in 2004, consists of three annual prizes, which are presented to scientists in the fields of Astronomy, Life Science and Medicine, and Mathematical Sciences. Each prize carries a monetary award of $1 million.

The 2014 Shaw Prize in Astronomy was awarded to Daniel Eisenstein, of Harvard University; Shaun Cole, of Durham University, UK; and John Peacock, at the University of Edinburgh, UK, for their contributions to the measurements of features in the large-scale structure of galaxies. The prize in mathematics was awarded to George Lusztig, at the Massachusetts Institute of Technology, for his fundamental contributions to algebra, algebraic geometry and representation theory.

The 2014 Shaw Laureates will receive their awards in Hong Kong at the eleventh annual ceremony on Wednesday, Sept. 24.

Established through the support and guidance of Hong Kong entrepreneur Run Run Shaw, the Shaw Prize is an international award managed and administered by The Shaw Prize Foundation, in Hong Kong. Shaw also founded The Shaw Foundation Hong Kong and The Sir Run Run Shaw Charitable Trust, both dedicated to the promotion of education, scientific and technological research, medical and welfare services, and culture and the arts.