Young adults with such cardiac risk factors as high blood pressure and elevated glucose levels have significantly worse cognitive function in middle age, according to a new study by dementia researchers at UC San Francisco.

The findings bolster the view that diseases like Alzheimer’s develop over an individual’s lifespan and may be set in motion early in life. And they offer hope that young adults may be able to lower their risk of developing dementia through diet and exercise, or even by taking medications. 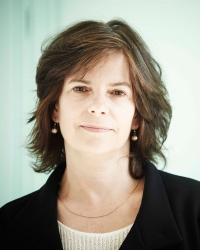 “These cardiovascular risk factors are all quite modifiable,” said senior author Kristine Yaffe, MD, a professor in the departments of Psychiatry, Neurology, and Epidemiology and Biostatistics at UCSF, who holds the Roy and Marie Scola Endowed Chair in Psychiatry.

“We already know that reducing these risk factors in midlife can decrease the risk of dementia in old age,” continued Yaffe, who is also Chief of Geriatric Psychiatry and Director of the Memory Disorders Clinic at the San Francisco VA Medical Center. “If it turns out that the damage begins before middle age, we may need to expand our focus and work on reducing heart disease risks in earlier stages of life.”

The study, published March 31 in Circulation, examines data from more than 3,300 18- to 30-year-olds in the Coronary Artery Risk Development in Young Adults (CARDIA) study, which began enrolling thousands of participants nationwide in 1985 to understand how heart disease develops in black and white adults.

Cardiac risk factors were measured every two to five years for 25 years, at which point those in the study underwent tests to measure their executive function, cognitive processing speed and verbal memory.

If it turns out that the damage begins before middle age, we may need to expand our focus and work on reducing heart disease risks in earlier stages of life.

Those whose blood pressure and glucose exceeded recommended levels during the 25-year study performed worse on all three tests, while high cholesterol was associated only with poor verbal memory.

The authors cited a number of mechanisms by which elevated blood pressure and glucose could diminish cognition in middle age, such as by reducing blood supply to the brain, causing changes in brain structure and increasing inflammation and oxidative stress, which can damage neurons. Another possibility is that these risk factors may interfere with the clearance of amyloid proteins associated with Alzheimer’s disease.

Since cognitive function was not measured at the beginning of the study, the authors could not estimate the cognitive change caused by these risk factors.