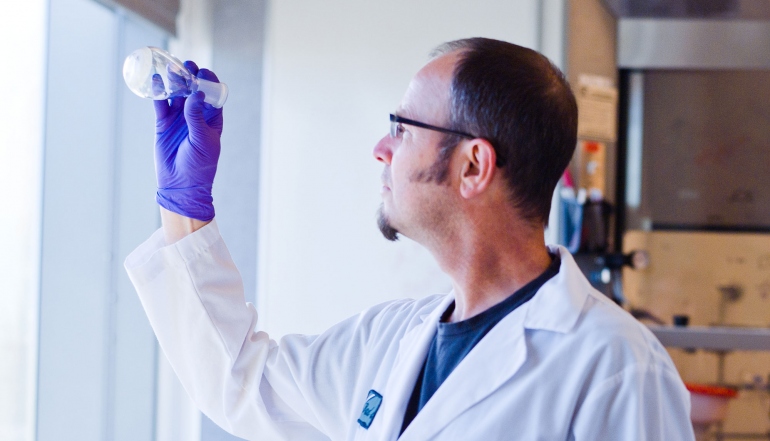 UC San Francisco’s four professional schools topped the nation in federal research funding in 2013, with the University as a whole ranking first among public recipients and second overall in funds from the National Institutes of Health (NIH), according to annual NIH figures.

Browse interactive charts and graphs that illustrate how UCSF stacks up in NIH funding.

These highly competitive funds – more than $517 million in total through contracts and grants – reflect the quality of the research on campus and enable UCSF scientists to continue their pioneering efforts to understand the underlying causes of such diseases as cancer, cardiovascular disease, diabetes, HIV, Parkinson’s and Alzheimer’s disease, and to work to develop improved therapies for them.

“NIH funding is the lifeblood of biomedical research in this nation and enables us, collectively, to tackle the most urgent questions in health and medicine,” said UCSF Chancellor Susan Desmond-Hellmann, MD, MPH. “It is a testament to the excellence of our faculty to have all four of our professional schools and many of our research departments lead their fields in these competitive grants.”

The UCSF School of Medicine received the most funding of any school in the nation for the second year in a row, at $439.6 million for fiscal year 2013, to support research, training and fellowships.

The UCSF schools of Pharmacy and of Dentistry ranked first in their fields in NIH grants for 2013: Pharmacy for the 34th consecutive year, with $29.2 million; and Dentistry for the 22nd year, with $13.7 million. The UCSF School of Nursing also regained its lead after briefly ranking second last year, with $9.6 million in grants in 2013.

All told, UCSF received more than $501.6 million total in grants, with an additional $15.5 million in NIH contracts, for which UCSF scientists compete to perform specific research projects for the national institutes.

“UCSF is on the cutting edge of innovation, medicine, and scientific progress – a key reason why San Francisco always leads the way," said House Democratic Leader Nancy Pelosi. “The work of UCSF represents the best use of federal investments: to advance scientific discovery, to expand biomedical research, to lay the foundations for new industries, and to ensure the breakthroughs of tomorrow are made right here in the United States.”

The rankings reflect the breadth of UCSF’s expertise in research and education across multiple health-science arenas, as well as the scale of the University’s $1.1 billion scientific enterprise. The funding, considered a strong indicator of the caliber of an institution’s research, enables UCSF to deliver on its public mission of transforming health worldwide, while generating more than $6.2 billion in economic benefit to the local economy through jobs, new companies and products, and direct health care to the San Francisco Bay Area and beyond.

"UCSF is a world-class institution for San Francisco and the entire world," said San Francisco Mayor Ed Lee. "Having four UCSF schools ranked first in the nation for competitive National Institutes of Health funding is a tremendous accomplishment, and our City is proud to be the Innovation Capital of the World where UCSF’s medical research and scientific breakthroughs will continue to benefit the world for generations to come.”

The NIH grants play a key role in supporting UCSF’s graduate-level biomedical enterprise, including research into the genetic, molecular and cellular basis of diseases, epidemiological and clinical-research studies, and efforts to translate science into better care. That research has led to five UCSF faculty members receiving the Nobel Prize in Physiology or Medicine, including 2012 recipient Shinya Yamanaka, MD, PhD, a professor of anatomy and senior investigator at the UCSF-affiliated Gladstone Institutes.

“NIH funding has led to powerful scientific advances over the years, both at UCSF and in research institutions nationwide,” said Jeffrey A. Bluestone, PhD, UCSF’s executive vice chancellor and provost, who leads the University’s research and educational enterprises.

“These grants also play a tremendous role in helping innovative young scientists launch their research careers,” Bluestone said. “These are the scientific leaders of the future, the people who will make a difference for all of us in the years to come.”

UCSF has ranked among the nation’s top institutions in NIH funding for more than two decades, as have its four schools and the Graduate Division. Federal funding also buoys the local and regional economy, Desmond-Hellmann said, as the scientists purchase materials and instruments and employ laboratory staff. Other economic engines include patents and scientific advances generated by NIH-funded research and related industries, such as biotechnology, as well as the entrepreneurs who launch companies based on research conducted on campus.