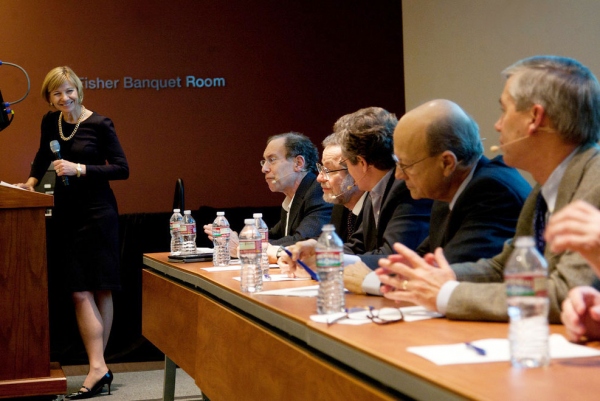 UCSF Chancellor Susan Desmond-Hellmann hosted a panel discussion with the recipients of the 2014 Breakthrough Prize in Life Sciences during a daylong scientific symposium honoring 2013 and 2014 winners on Dec. 13. Photo by Cindy Chew

Some of the top scientific minds converged at UC San Francisco last week as part of a two-day celebration of the 2014 Breakthrough Prize in Life Sciences.

Mahlon DeLong
Emory University
For defining the interlocking circuits in the brain that malfunction in Parkinson's disease. This scientific foundation underlies the circuit-based treatment of Parkinson's disease by deep brain stimulation.

Michael Hall
University of Basel
For the discovery of Target of Rapamycin (TOR) and its role in cell growth control.

Robert Langer
David H. Koch Institute Professor at the Massachusetts Institute of Technology
For discoveries leading to the development of controlled drug-release systems and new biomaterials.

Richard Lifton
Yale University; Howard Hughes Medical Institute
For the discovery of genes and biochemical mechanisms that cause hypertension.

Living up to its nickname, the “Oscars of Science,” the celebration kicked off with a Dec. 12 gala at Moffett Field in Mountain View, Calif., that was hosted by actor Kevin Spacey and attended by other Hollywood celebrities and magnates of Silicon Valley.

The winners, who each receive $3 million awards, joined past winners the next day for a sold-out scientific symposium at UCSF’s Mission Bay campus to highlight the groundbreaking research that earned them the prizes. The daylong event also included three of UCSF’s Nobel laureates: moderators Elizabeth Blackburn, PhD, and Stanley Prusiner, MD, as well as Shinya Yamanaka, MD, PhD, a 2013 Breakthrough Prize winner who presented at the symposium.

Though the talks by the all-star scientific roster were wide-ranging, cancer was the touchstone.

“Cancer was a mystery” when he began his career in cancer genetics in the mid-1970s, said lead-off speaker Bert Vogelstein, MD of Johns Hopkins School of Medicine. But a sense of progress and hope was palpable in the hall as speakers recounted the successes of – and lessons learned from – the first generation of rationally designed, targeted cancer drugs.

The aim of the Breakthrough Prizes, which also include separate awards for physics and mathematics, is to raise the profile of scientists whose hard work often doesn’t get mainstream attention.

Shinya Yamanaka, MD, PhD, a UCSF anatomy professor who won a 2013 Breakthrough Prize, presents his research at the symposium. Photo by Susan Merrell 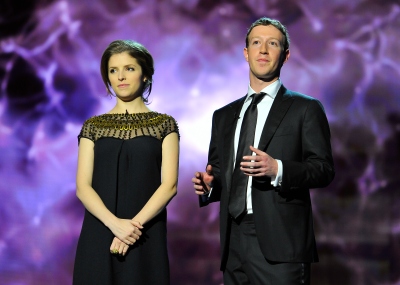 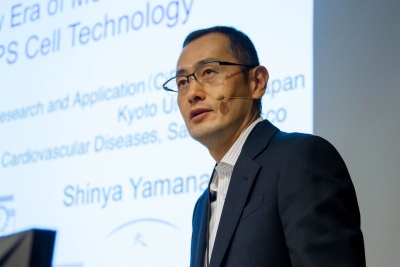 Shinya Yamanaka, MD, PhD, a UCSF anatomy professor who won a 2013 Breakthrough Prize, presents his research at the symposium. Photo by Susan Merrell

“The Breakthrough Prize is our effort to put the spotlight on these amazing heroes. Their work in physics and genetics, cosmology, neurology and mathematics will change lives for generations and we are excited to celebrate them,” Zuckerberg said in a statement announcing the 2014 winners.

The symposium wrapped up with a panel discussion moderated by UCSF Chancellor Susan Desmond-Hellmann, MD, MPH, in which the 2014 Breakthrough Prize winners talked about their lives in science and what the future may hold.

Allison is a pioneer of immunotherapy for cancer, which has seen unprecedented successes over the past few years. De Long did much of the basic science that led to deep-brain stimulation for movement disorders such as Parkinson’s disease. Hall identified a biological pathway known as mTOR, which plays a central role in cancer. Langer, once called “the smartest man in Boston” by the Boston Globe, is a prolific biomedical engineer and educator who has developed new materials to deliver drugs. Lifton did the genetic research establishing that high blood pressure results when the body’s salt balance mechanisms malfunction, work that has resulted in new medications and dietary modifications worldwide. And Varshavsky is an expert on the aptly named ubiquitin system, once thought to be mainly involved in cellular “trash collection,” but now known to touch nearly every aspect of cell biology.

In expressing his gratitude the prize committee, Allison may have summed up the feelings of all of the prize recipients on receiving the prize, which carries more than double the cash award of the Nobel Prize: “It’s really hasn’t sunk in yet, but I guess it will.”