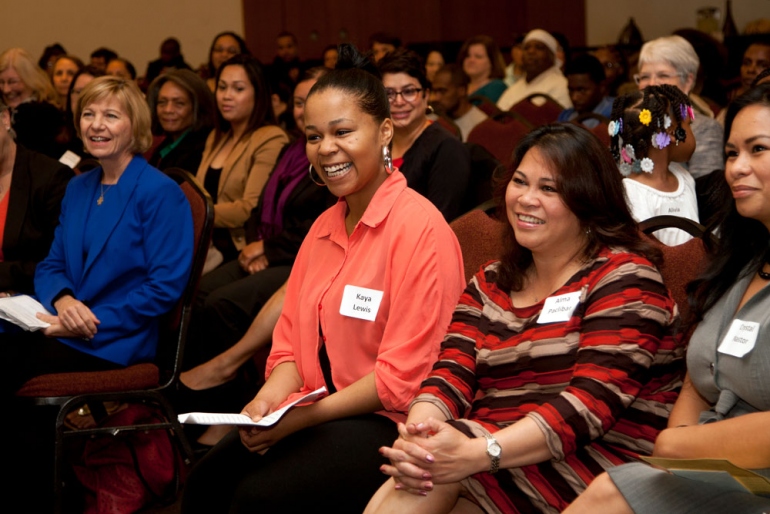 EXCEL graduate Kaya Lewis, center, smiles as she is introduced to deliver a speech at the program's latest graduation ceremony on Oct. 25. Photo by Cindy Chew

Many of those selected for UC San Francisco’s EXCEL program share a similar spirit: Despite tough circumstances or mistakes that left them unable to find a job, they possess the will and determination to turn their lives around.

UCSF’s flagship workforce development program has provided the opportunity to do just that. 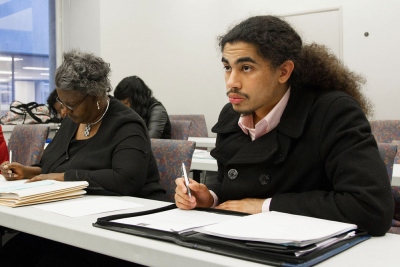 McKullin Green, right, listens to the instructor for the EXCEL program, which provides 10 weeks of classroom training before placing participants in a paid internship at UCSF. Photo by Susan Merrell

A recent study conducted by an independent firm found that 80 percent of EXCEL graduates were employed six months after completing the program, making it the most successful workforce development program under San Francisco’s Jobs Now initiative.

James Whelly, manager of the Workforce Development Division of the city’s Human Services Agency, said the city is using the EXCEL success story to convince other employers to start similar programs and spread the gospel of workforce training outside San Francisco.

“We’ve used the UCSF model as a kind of ‘cherry on the top’ demonstration to show senior policymakers from Washington how programs like this can actually work successfully to move individuals from welfare to work,” Whelly said. “We tell them, ‘This can work. Don’t talk to us. Talk to UCSF. Look at the results.’”

Success By the Numbers

EXCEL, which stands for Excellence through Community Engagement and Learning, uses both classroom and on-the-job training to prepare participants for careers in the health care sector.

More than 180 people have participated in the program since it launched in 1998.

After a four-year hiatus, the program was re-tooled in 2008, and not-for-profit Jewish Vocational Services (JVS) was brought in as the training agency. Participants spend 10 weeks immersed in classes that teach technical as well as professional behavior skills before they’re assigned to four-month, paid internships at UCSF. 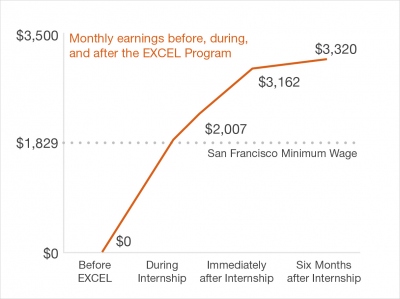 From 2010 to 2013, a total of 53 of 67 EXCEL participants had either temporary or permanent jobs six months after graduating, and 45 of them had jobs at UCSF.

None of the participants had jobs when they entered the program, and more than 90 percent had received welfare benefits

Those 45 graduates who were working at UCSF six months after graduation earned an average of $3,320 a month – exceeding the monthly salary at San Francisco minimum wage by $1,491 – according to an independent study conducted by the consulting group, Learning for Action.

Building Up the Community

EXCEL is partially funded by the city and county of San Francisco, and officials there say the program is critical to helping the people they serve get off welfare and into the workforce.

“This program is very important to us,” said Whelly, of the Workforce Development Division. “UCSF is the second largest employer in San Francisco. To have such a significant employer work with our agency as a partner and offer a pathway for people to move to employment and self-sufficiency is invaluable to us.” 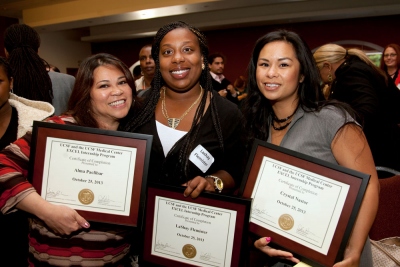 UCSF’s commitment to workforce development dates to the inception of the Mission Bay campus. The city played a major role in the creation of the campus, including the donation of 13 acres of land, because it saw UCSF as a critical link in the development of a new neighborhood in the southeast section of the city as well as the development of a local biotech sector.  In turn, UCSF committed to creating employment opportunities for San Franciscans.

According to the Learning for Action study, nearly 60 percent of EXCEL’s participants over the last three years have come from the city’s southeast sector, although the program draws from 16 different neighborhoods across the city.

“One of the key ingredients in the success of EXCEL is that it is a partnership, with each partner contributing what it does best,” said Barbara J. French, vice chancellor of UCSF University Relations, which manges the program.   “There is no reason why EXCEL could not be replicated in other communities across the region, across the state and across the nation.”

A Sense of Pride and Empowerment

Before Laloni Jones started in the program, she used to ride the streetcar down Third Street, past UCSF’s new buildings rising in Mission Bay. “I would think to myself, ‘I would love to work there, but places like that just don’t hire people like me,’” she said. 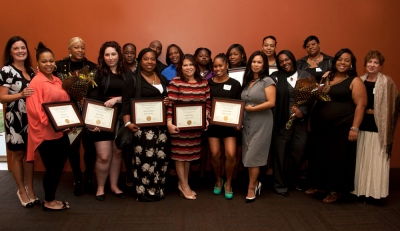 The Fall 2013 EXCEL graduating class pose for a photo with program leaders. Photo by Cindy Chew

After 10 years of work in restaurants and bars, Jones, a 32-year-old single mother of two, found herself out of work. “There was no money to continue my education, and I lacked the skills and experience to land a job with sustainable income,” she said. And then she found EXCEL. 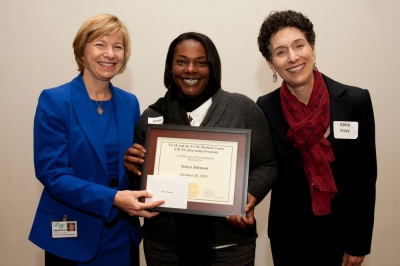 “It picked me up when I was really down,” she said. “Now my future is really bright. I have a steady income where I can support my children.”

After Jones completed her internship at a UCSF pediatric diabetes clinic, she transitioned into a temporary job in the same office and is now a career employee.

“For someone to say, ‘We see potential in you. We’re going to train you, and give you an internship to prove yourself.’ It’s invaluable,” she said.

EXCEL graduate Sonya Johnson works at the front desk at the UCSF Department of Radiology. When patients come in for a CAT scan or an MRI, it’s Johnson who is checking their identity and insurance and leading them to the dressing room. “I’m the face of UCSF,” she said.

“Once you’re working for UCSF, you can really go far,” Johnson said. “There’s so much opportunity for growth. Being that UCSF is a teaching institution, everyone is very helpful in teaching you what it takes to make it.”

As the economy recovers from the recession, many Americans are still falling through the cracks, or stagnating in low-wage jobs that pay too little to make ends meet.

While governments have poured millions of dollars into training programs for displaced workers, a 2011 report from the Brookings Institute’s Hamilton Project found that certain programs proved especially effective.

EXCEL: By the Numbers 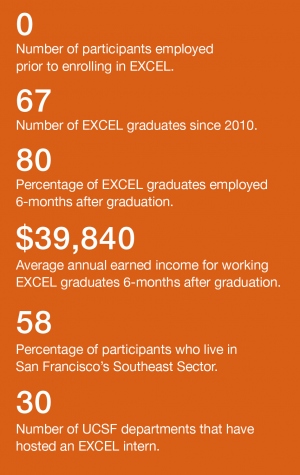 “The most effective programs closely match the type and intensity of training to the needs and circumstances of the workers,” authors Michael Greenstone and Adam Looney wrote. In addition, they said, “Training programs should directly engage employer and industry partners.”

Tracey Grose, vice president of the Bay Area Council’s Economic Institute, said that as the global economy continues to evolve rapidly, workers need new skills to keep up – and businesses need to be communicating what those skills are. “The need for successful programs that are employer-driven is only increasing,” she said.

For UCSF, training people who can eventually become part of its dynamic workforce is a win-win situation. “We know what our needs are. We know what skills are required in our different departments,” Lew said. “We can design the program to suit our own internal needs.”

Abbie Snay, executive director of JVS, attributes the success of the program to a few key offerings:

Not just jobs, but careers. “The jobs people get (coming out of the program) are great entry-level jobs, and they all come with a tremendous potential for advancement,” Snay said. “They may start as administrative assistants, but they could go on to become lab technicians. That’s really important to us.”

On the heels of the fifth-cycle graduation, the sixth cycle of Excel students has already commenced.

JVS teacher Linda Bryan leads her classes with tough love. She works hard to build up their self-confidence, and their assertiveness. But she has firm rules: If you miss too many classes, or don’t dress professionally, you are out of the program. 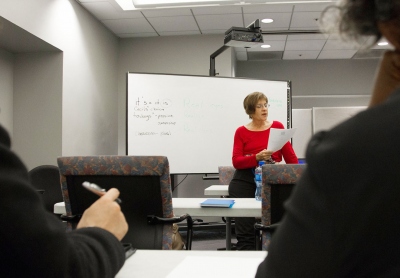 The key, said Ronald Caracter Jr., 46, is to persist. Caracter said he knows what it is to make almost $100,000 a year, based on his former job as a car salesman, and “I know what it is to be homeless.” He had bounced around in different jobs, and was out of work for more than a year when he found EXCEL.

“UCSF is the second leading employer in San Francisco. They’ve been in the health and service field for 150 years. They’re one of the top in the nation. They’re world-renowned,” Caracter said. “I’m not 18 years old anymore. I’m looking for a place that will offer security.”