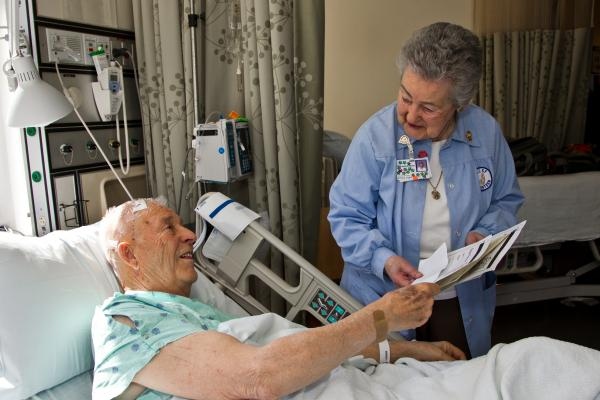 “How might we all maintain well-being and thrive as we age?”

This question was posed in a worldwide OpenIDEO/Mayo Clinic Challenge that produced 133 concepts and eventually six winners, including a team from UC San Francisco.

UCSF’s team ranked in the top three in terms of popularity and number of views to its proposal.

“Nine medical education staff decided to take on the challenge and over the course of two months they participated in a worldwide community who were inspiring, ideating, prototyping and refining solutions to the challenge,” said Kevin Souza, MS, associate dean for medical education at UCSF. “Eventually the team coalesced around the solution titled ‘More than just a doctor's visit, a bridge to wellness,’ which proposes a different approach to the learner-patient health care visit.”

The nine members of the UCSF group, all from the medical education staff in the School of Medicine, envisioned reshaping a doctor’s visit by creating a wellness team. Consisting of medical students and senior volunteers, the team members would serve as coaches for aging community members in inpatient settings, where they could talk about everything from prevention and nutrition to depression and other mental or emotional issues.

Looking at How to Do Things Better

“My overall goal is to empower the staff to look at the system around them,” Souza said. “For example, if you’re at the front desk at the Student Affairs Center, how could it be better? We started training our staff in these skills, and I started looking for ways to practice them. This challenge came up and it was health-related, which fit beautifully with our focus.”

Souza invited his entire staff to participate if they wished. The nine members of the final team brought diverse skills and backgrounds. Their work is also directly tied into the UCSF Bridges Curriculum now being designed, which will allow medical students to learn systems improvement skills and work on quality improvement projects.

“What happens when a 21-year-old med student goes to coach seniors on health, wellness and prevention?” Souza asked. “Unless students are engaged with the senior population, they don’t really understand what life is like. So what if we bring in a senior volunteer closer in age to the patient, who makes a better connection and helps teach the student the challenges they face and issues that are important? That was really the crux of the idea.”

Team leader Christian Burke said staff members from many different parts of medical education who don’t normally interact came together, meeting in 90-minute sessions every two weeks during the 60 days the competitors were given.

“They learned to brainstorm,” said Burke, assistant director of Technology Enhanced Learning at the UCSF School of Medicine, who wanted to teach them design thinking.

“The way it starts, it’s kind of like a funnel,” he added, explaining that the OpenIDEO process relies first on inspiration, then coming up with ideas, followed by feedback, then prototyping and, finally, refining solutions. “The beauty of this kind of crowdsourcing idea is that it’s not just senior-centered. It’s a mix of people,” Burke said.

Bernie Miller, at 69, was one of the two oldest members of the UCSF team. “When I first heard about the challenge, it looked really interesting,” said Miller, director of the Standardized Patient Program at the Kanbar Center for Simulation and Clinical Skills. “It had to do with creative thinking and humanism. When I got involved, it became more than that. It became something very exciting.”

There was instant bonding within the group, Miller said, and everyone had a voice – but not an ego. “All you have to do is go in with an open mind and a lot of ideas,” he said. “But the key is not to get attached to your own ideas. Everyone is in a heightened state of creativity. Some ideas stick. You have to let it take on a life of its own.”

The whole endeavor was one of the highlights of his 13 years at UCSF, Miller said, and it has had a direct effect on everything he has done since. “If you experience what worked there, you apply it to other situations,” he said.

Realizing Any Thing is Possible

At 27, Heather Peng is on the other end of the age spectrum, but she shared Miller’s enthusiasm. “It just felt like a safe space,” said Peng, an advisor/specialist for third-year students in Undergraduate Medical Education. “It was a time when everyone’s ideas came alive, and people would piggyback off something. The experience made me realize that any thing’s possible.”

She went into the Design Challenge with an optimistic mindset, but figured it would be a valuable process with little chance of being a winner. “It turned out that we were able to create something really awesome that could get piloted,” Peng said. “In terms of Bridges and the new curriculum, it makes me feel really excited.”

Souza said the UCSF team was competing against professional design firms, which made its triumph even more remarkable. If there’s a desire to take the idea forward, it will be brought into the formal curriculum process, he said.

Besides Burke, Miller and Peng, the other members of the UCSF team were: Kathleen Land, Charito Viloria, Patricia Ramirez, Ann Homan, Karen Brent and Liana Crosby.

“I found it very inspiring that they’d put time and energy into something that’s powerful and is a game changer, learning skills that will help them make a difference,” Souza said.