A low-key revolution is taking place at UC San Francisco that aims to do nothing less than change the way medical students learn and patients receive care.

It is called the UCSF Bridges Curriculum Redesign. 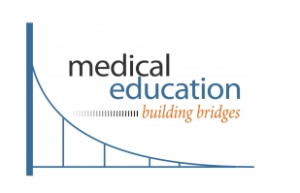 “The curriculum is being redesigned from the perspective of what kind of doctor we need to meet the demands of practice in the 21st century,” said Catherine Lucey, MD, vice dean for education at UCSF School of Medicine. “We’re looking specifically at education to address some of the pressing and unmet needs that have been vexing us as providers and as institutions.”

Those needs include persistent problems of safety, quality, patient satisfaction and waste in health care delivery, she said. People all over the country have been working on those issues for at least a decade, Lucey said, but the lessons haven’t stuck – which is why a radical revamping is necessary.

“We are trying to work backward. We’re first envisioning what the system to fix those issues might look like, and then identifying the characteristics and responsibilities of physicians who would work well within that system,” Lucey said. “This is different from the way curriculum reform usually gets done.”

The Bridges approach has a second unique guiding principle, too: A deliberate commitment to clinical partners that students will be valuable rather than burdensome. “We’re aspiring to make students something worth vying for,” Lucey said.

The redesign, which began in May 2012, is currently in the planning phase and will be fully implemented by 2016 for all medical students. There have been several pilot projects, including one in which students were taught process mapping and assigned to find ways to improve access in an endocrinology clinic. 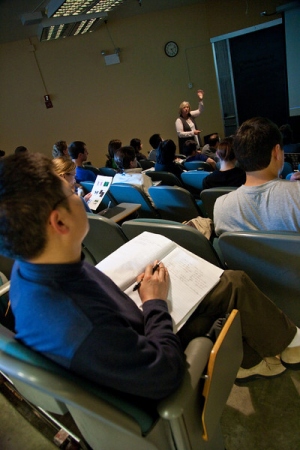 Medical students sit in a lecture at the Helen Diller Family

Many people are involved in the redesign. First-year medical student Michael Davies, 23, joined the Bridges curriculum committee last fall. One assignment was to share personal stories about people whose contact with the health care system showed why reform is needed.

Davies wrote an essay about his 81-year-old grandmother in San Diego, who used to exercise a lot but developed knee problems and resisted getting a knee replacement because a friend’s had required a painful recovery. Instead, she gained 40 pounds, uses a wheelchair and lives in an assisted-care home.

The essay turned into a whiteboard animation video, which Davies helped narrate. It was shown at the annual medical education retreat in April. “People were excited about the idea of the Bridges curriculum – starting with a set of ideals and shaping them into something more concrete,” he said.

“The video showed that not everything is about a lack of access to health care,” said Davies, who believes continuity of care might have made a big difference to his grandmother. “She has very good access, but in spite of that, her outcome was not ideal.”

Lucey said new content will appear at the beginning of the curriculum rather than at the end. “We want to reshape the way our students think about their roles as physicians,” she said. Key components will be understanding health care as a system and the importance of measuring and continuously improving patient experiences and outcomes. 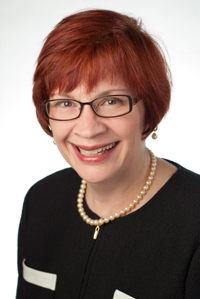 Students will have authentic learning experiences. They’re likely to do four-month rather than two-week rotations. Innovation and collaboration will be emphasized. And they’ll get more online content delivery, said Lucey, who added that Daniel Lowenstein, MD, professor and vice chair of neurology at UCSF, is already experimenting with that in the “Brain, Mind and Behavior” course he oversees.

Lowenstein, director of the UCSF Epilepsy Center and of Physician-Scientist and Education Training Programs for the UCSF School of Medicine, has been using a flipped classroom model.

“Students can rely on new technology to accomplish a lot of learning on their own,” he said. “So we can use face-to-face time to build on what they’ve been learning.”

A few weeks ago, Lowenstein asked his students to review five video modules, 10 to 12 minutes long, before going through some clinical cases in a three-hour session on epilepsy.

“I was really very pleasantly surprised how knowledgeable they were about the basics of epilepsy,” he said. “They did remarkably well. And the level of discourse and analysis was at a much higher level because of the preparation.” 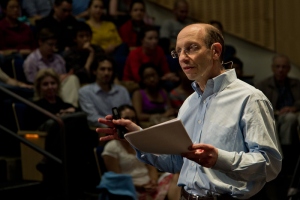 Two of his UCSF colleagues in the class employed a similar approach to the topic of strokes. Andy Josephson, MD, took his iPad on rounds and interviewed patients, using Adobe Connect to reach students. “It was in real time,” Lowenstein said. “And rather than having 120 people in the ICU, they could watch from the lecture hall” and ask questions relayed through Wade Smith, MD.

“It’s an example of the way technology platforms are altering learning,” Lowenstein said.

Lucey credited her predecessor, David Irby, PhD, with building an education infrastructure that laid the groundwork for Bridges. “Members of the faculty here are incredibly creative,” she said. “They know their education theory and clinical content well. So, we’re in a great position to lead this change in education.”