Massive changes are underway – from the effects of the federal budget sequestration to the implementation of the Affordable Care Act – and UC San Francisco is meeting these challenges with equally huge investments in its research, education and patient care, the chancellor said Tuesday.

Chancellor Susan Desmond-Hellmann, MD, MPH, the ninth person and first woman ever to lead UCSF, opened her fourth annual State of the University address with the announcement of one of its biggest new investments: a $60 million fellowship program that will support PhD students. 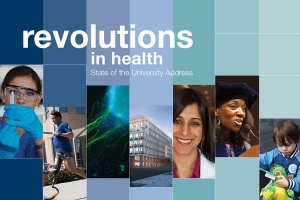 Watch the State of the University 2013

Click here to read the full transcript of the address.

“We know that fundamental research is the key to unlocking the mysteries of disease, and our scientists are world leaders in those discoveries,” she said. “But as we look ahead, it's clear that we can't rely on the state or on federal grants to support our most promising young scientists – these are the ones who take big risks, ask new questions and ultimately will deliver future breakthroughs.”

The UCSF Discovery Fellows Program is made possible by a $30 million gift from Sir Michael Moritz and Harriet Heyman that will be matched with a $25 million commitment from UCSF plus a $5 million fundraising challenge. It’s the largest endowed PhD program in the history of the 10-campus University of California system, Desmond-Hellmann said.

“I see this as just the beginning of a larger effort across UCSF to secure significant resources to sustain and strengthen our basic sciences,” she said.

The generous gift tops UCSF’s second most productive fundraising year in its history: In fiscal year 2012, the University raised $364 million in private gifts and grants, according to Desmond-Hellmann. By comparison, the University received $185 million in state funds, she noted.

UCSF also is making a significant investment in the area of precision medicine, an emerging field that seeks to revolutionize health care from bench to benefit patients in the community by leveraging the wealth of information in patient data to more accurately diagnose and treat diseases.

“It’s a huge vision for the way we will conduct and share research, the way we will incorporate the vast amounts of data – genetic and environmental and health data –  into more precise care for every person around the world,” Desmond-Hellmann said.

UCSF launched this effort in May with the OME Precision Medicine Summit, which brought 170 leaders in health, science, technology and government to the Mission Bay campus to brainstorm ways to create the infrastructure needed to make precision medicine a reality across the country and around the world. To continue that work, Desmond-Hellmann said she’s established a Precision Medicine Steering Committee on campus to develop business plans for various initiatives that will ensure UCSF’s leadership in this area.

Ambitious investments in key areas aim to secure UCSF’s position over the next decade, which will be shaped by the next strategic plan. To solicit bold ideas for this plan, the chancellor invited the campus community to participate in UCSF2025, an online, 36-hour gaming event earlier this month. It generated nearly 25,000 ideas from more than 2,600 individuals and teams.

“We wanted each of you to step outside your comfort zone, to think beyond your everyday jobs and generate bold ideas from new perspectives about the challenges and opportunities we face,” she said.

The ideas from the game will be honed over the next few months through a series of campus workshops, she said. The result will be a plan for the future called “UCSF 2.0.”

From Shinya Yamanaka’s Nobel Prize last fall to the groundbreaking of the latest Mission Bay building for global health, Desmond-Hellmann highlighted a long list of institutional achievements over the past year.

But she took time to recognize UCSF’s greatest asset: the people who make up this dynamic institution. In telling her story of the past year in research, patient care and education, she called out some individuals who represent the boldness and passion of the UCSF spirit.

In the area of research, Desmond-Hellmann noted the depth of UCSF’s faculty, producing 4,500 scientific papers each year and earning the most grant money from the National Institutes of Health by any public institution “in the face of extremely tight funding.”

One of the “rising stars of science,” she said, is Hana El-Samad, PhD, a mechanical engineer who applied her fascination with control theory – how systems function in changing environments – to cell biology. Since joining UCSF as a Sandler Fellow, she has done remarkable research on how information is communicated through networks of cells.

Desmond-Hellmann recognized El-Samad’s use of collaboration as a key tool in pushing her work to the next level, noting the long list of co-authors she credited on a recent scientific paper.

“This is someone who, when facing the toughest challenges, walks out of her office, and intentionally seeks insights from people who think differently than she does,” she said. “That’s how great breakthroughs are achieved.”

In the area of patient care, UCSF Medical Center and UCSF Benioff Children’s Hospital again ranked among the best in the nation and continues to improve the quality of care through several key initiatives, Desmond-Hellmann said. Living PRIDE is one effort to improve the patient experience and increase employee and physician engagement, and a program to maximize hand hygiene has resulted in at least 90 percent compliance for 13th straight month.

One clinician who seeks to impact patients on a global scale is Jeff Olgin, MD, a cardiologist who’s working to expand the landmark Framingham Heart Study, which began tracking 5,000 people in 1948 to learn about risk factors for heart disease. Leveraging the power of mobile technology to reach patients and reduce costs, Olgin and his team have launched the Health eHeart study, which aims to enroll 1 million volunteers who will track their hearts and lifestyles through their smartphones.

“This is Framingham to the power of 10,” Desmond-Hellmann said. “This will be an incredible study, and when it progresses over time, help us worldwide to understand cardiac disease. And it fits perfectly with our efforts to expand data-driven, precision medicine.”

The new leader of this effort is Elizabeth Watkins, PhD, dean of the Graduate Division, whose role was expanded this year to Vice Chancellor of Student Academic Affairs. Watkins, whose academic background is in the history of health sciences, made a number of strides while heading the Graduate Division, such as securing more student funding opportunities, improving career planning and engaging students on ways to improve education.

“Liz personifies the ‘dive-in-and-do-it’ approach at UCSF, but as a historian, she also brings a unique perspective to leading a health sciences student body,” Desmond-Hellmann said.

“As a social scientist at UCSF, Liz has adeptly worked with researchers across multiple disciplines and with diverse audiences,” she added. “That will be invaluable as she brings together the graduate division and academic affairs under one watch, enabling us to truly integrate our professional education.”

Preparing for Challenges Ahead

Over the past year, UCSF has taken a number of steps to position itself well amid looming changes.

“Our particular focus on science, health and education places us at the junction of three fields that are undergoing perhaps the greatest challenges right now,” Desmond-Hellmann said.

While UCSF has competed well for National Institute of Health funds, the impact of sequestration has been sobering across campus, she said: In a survey of 440 faculty members, half have delayed or canceled research; more than 60 percent have seen their grants shrink; and more than one-fifth have had to lay off staff or postdoctoral scholars.

To ensure UCSF remains competitive, UCSF opened an office this year in Washington, D.C., to strengthen its relationship with White House and Congressional leaders. The University also is actively seeking new funding opportunities to support high-impact research, and the Moritz-Heyman gift announced Tuesday is a key example of that progress.

“We pride ourselves at UCSF on having a culture in which researchers focus on the most important science, the big risks and the big ideas, not the conservative ones that we think will get funded,” she said. “And we’re not going to compromise that.”

We pride ourselves at UCSF on having a culture in which researchers focus on the most important science, the big risks and the big ideas, not the conservative ones that we think will get funded. And we’re not going to compromise that.

Similar funding challenges plague the educational arena, with state funding on the decline and tuition costs on the rise. Preparing the next generation of researchers and clinicians also will require training them “to learn for their entire lives, to work together with other professionals and be flexible enough to adjust to the rapidly changing health care landscape.”

One of the biggest educational initiatives is the School of Medicine’s “Bridges Curriculum,” which seeks to put teamwork and systems improvement at the core of what students learn. The University is also making a huge investment in technology, including embarking on its first online degree program – a Masters of Science in Health Care Administration and Interprofessional Leadership out of the School of Nursing – as well as free Coursera courses that bring learning opportunities to a massive, global audience.

Next week sees the launch of open enrollment for Covered California, the state health insurance exchange set up in response to the Affordable Care Act, which is expected to extend coverage to more than 5 million Californians who are currently uninsured. Meanwhile, there’s enormous pressure to lower health care costs in the nation’s $2.5 trillion system, and increasing regulatory pressure on patient data.

UCSF also is exploring the creation of its own Accountable Care Organization in partnership with other health care providers throughout Northern California, and researching the best ways to deliver low cost, quality health care through its newly created Center for Health Care Value.

Through her speech, the chancellor continually brought the focus back to the people who make up UCSF and those who are impacted by their work.

Desmond-Hellmann noted a couple ongoing UCSF initiatives to invest in its people, including the Leadership Development Initiative now in its fifth year and the succession planning program that seeks to identify future leaders internally as 30 percent of UCSF’s managers are expected to retire over the next three years.

She also offered two reminders of the importance of UCSF’s work.

In the wake of the July 6 Asiana Airlines crash at San Francisco International Airport, the team at San Francisco General Hospital and Trauma Center rallied to tackle “the biggest single disaster this hospital has ever dealt with,” she said. In total, UCSF medical teams based at SFGH worked cared for 67 patients that day.

“This tragedy shows what happens when you put the top people in their fields, train them as a team, and prepare them to bring their best talents to the work they do, every day,” she said. “That personifies my vision for what we all can aspire to.”

And the new UCSF Benioff Children’s Hospital ad campaign underscores “the difference we are making, one family at a time,” she said, before showing the audience one of the TV ads telling the story of Derrick Lee, who had a life-saving liver transplant before his first birthday.

Ultimately, Desmond-Hellmann said she regretted not being able to call out the amazing work of all 23,000 people on campus.

“All of our stories are what make up the great institution that we all work at, learn at and care for patients at,” she said. “And I expect you to go out there and tell your story, and our story, about the changes, the transformations, the revolutions we're leading in health.”