Trauma surgeon Samir Soomro, MD, traveled more than 7,600 miles to San Francisco with the singular goal of helping patients back home in his native Pakistan.

“Our trauma patients are mostly from auto traffic accidents,” said Soomro, who practices out of Larkana, a city in the southeastern portion of Pakistan. “And apart from road traffic accidents, we have bomb blasts injuries and firearm injuries.” 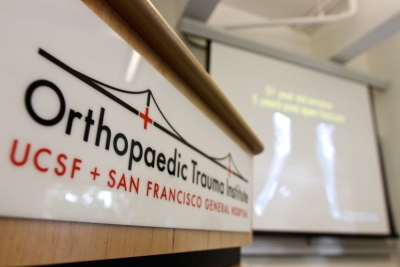 The Orthopaedic Trauma Institute, a collaboration between UCSF and San

“Our thought was we do a good job of trying to teach techniques of fixing bones, but we need to do a better job of helping orthopaedic surgeons deal with soft tissue – the muscles, the skin – that gets damaged,” said R. Richard Coughlin, MD, MPH, a UCSF orthopaedic surgeon and founder of the Institute for Global Orthopaedics and Traumatology (IGOT). “These surgeons take home a skill set that they immediately can apply to a number of patients that are sitting under their care in these hospital beds.”

Soomro and others made the trek halfway around the world to learn techniques from UCSF surgeons that could save their patients’ limbs – and in some cases, lives. IGOT, which sponsors this trauma course, was started by faculty and residents of UCSF in 2006 to improve the health care of underserved populations affected by orthopaedic disease and trauma. The goal of this institute is to partner with educational institutions at home and abroad to develop strategies to lessen the burden of musculoskeletal conditions.

“They’re teaching us tissue transfer technology and how we can improve our surgical technology with the resources we already have,” Soomro said. “So that’s what got me interested in coming here.”

Every year, more than 5.8 million people die from traumatic injuries, accounting for 10 percent of the world’s deaths – more than fatalities from HIV/AIDS, tuberculosis and malaria combined. Of all traumatic injury deaths, 95 percent occur in developing countries. 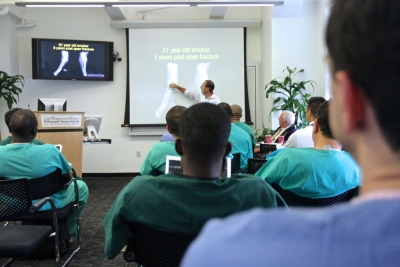 UCSF orthopaedic surgeon and co-director of IGOT Richard Gosselin, MD, MSc, MPH, travels up to eight months out of the year to teach surgeons in developing countries and to take care of trauma patients in underserved regions. He recently came back from a two-month assignment in Lebanon, near the Syrian border.

“I happen to be there at the same time as there was a big fight for a Syrian city called Al-Qusayr,” Gosselin said. “That fight lasted at least four to five weeks. There was very heavy fighting and a lot of casualties, and that’s mostly the people I got to take care of.”

He helped train Syrian and Lebanese orthopaedic surgeons in the management of war injuries.

“About 90 percent of injured had complex orthopaedic injuries with badly infected areas,” Gosselin said. “By and large, the majority of injuries we saw were already old and neglected injuries. So many wounds were already infected. Many limbs were already gangrenous.”

Teaching to Help a Global Community

Whether taking care of patients in remote parts of the world or teaching surgeons from developing countries in San Francisco, UCSF surgeons acutely recognize the difference their work makes on a global scale.

“There’s this multiplier effect that’s happening,” Gosselin said. “It has opened up a two-way street between these countries that are short on resources but not short on talent, and countries and places like UCSF that have more resources than they can actually use. And there’s the possibility of a two-way exchange that has been appreciated by both sides.” 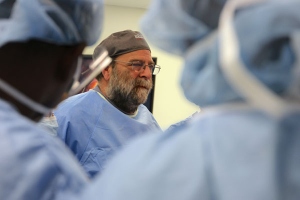 The ability to save a patient’s limb may mean the difference between a person being able to work and provide for one’s family or not, especially in developing countries.

“By covering traumatic injuries with soft tissue, these patients can go home after a week or two, versus being at the hospital for months and possibly losing their leg,” Coughlin said. “So there’s an enormous financial impact to the individual, to the family, to the society by bringing these patients back home and hopefully return back to their livelihoods.”

The international surgeons who attended this week’s course came from Tanzania, Haiti, Nepal, Ghana, Kenya, the Philippines, Ethiopia, Pakistan, Bangladesh and Malaysia. This is the fifth year UCSF held its trauma summit.

“So learning these things, when I go back to my country, I will share this knowledge with my colleagues,” Soomro said. “And we can hopefully have an end to the problems for the people we treat.”