UCSF will require everyone who works and studies at UCSF, including faculty, staff, students, trainees, patients, contractors and volunteers, to be tobacco-free.

No one will be permitted to use tobacco products while on any University property or adjacent grounds, including during lunch and break times, whether on or off campus.

The goal of the tobacco-free policy is to improve the level of safety and air quality within the hospital, ambulatory clinics, campus buildings and grounds, as well as the surrounding neighborhoods.

Cigarette smoking has long been identified as the most important source of preventable disease and illness and premature death worldwide. Smoking-related diseases claim an estimated 443,000 American lives each year, including those affected indirectly, such as babies born prematurely due to prenatal maternal smoking and victims of “secondhand” exposure to tobacco’s carcinogens, according to the American Lung Association.

Researchers at UCSF have long led the field of tobacco research and education showing myriad harmful short and long-term effects of cigarette smoking, second-hand smoke and other forms of tobacco use on health. Their leadership has helped inform policies and laws banning smoking in public places in the U.S and around the world.

UC President Mark Yudof last year requested that chancellors at all 10 campuses work toward implemeting a smoke-free policy that also bans the use, sale and promotion of tobacco products on University property by 2014. UCLA became a tobacco-free campus in April coinciding with Earth Day.

The movement to ban public smoking in health care organizations and higher education is expanding, as Cal State University Fullerton in August became the first Cal State campus to adopt a no-smoking policy. Smoking bans exist in 28 states, including California, which became the first state in 1995 to ban smoking in enclosed public places and workplaces. The statewide ban was extended to restaurants and bars in January 1998. 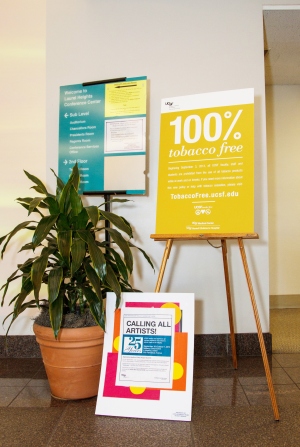 UCSF leaders say that the tobacco-free policy reflects a new era in health and wellness and demonstrates how UCSF is striving to be a workplace of choice.

“Think about when you were a kid. Think about going to a restaurant or being in an airplane. We all used to think that that was normal,” said Chancellor Susan Desmond-Hellmann, MD, MPH. “This tobacco-free policy could make a world at UCSF where it’s not normal to smoke.”

Mark Laret, chief executive officer of UCSF Medical Center and UCSF Benioff Children’s Hospital, agrees. “I just think we’re at the dawn of a new era of employee wellness. And I think this tobacco-free policy is a very important building block.”

UCSF offers a number of programs and services designed to improve overall health and wellness of employees and students. As a way to help those who smoke or use tobacco products to break the habit, UCSF provides several tobacco cessation programs.

Beginning on Tuesday, Sept. 3, UCSF Occupational Health Services will offer new nicotine replacement gum program – free of charge – for all faculty, staff and students, on an as-needed basis. This program is designed to help current tobacco users quit or curb their urge to use tobacco during their work shifts.

Details about the nicotine replacement therapy program, available cessation programs, and more information about this new policy can be found at: http://tobaccofree.ucsf.edu