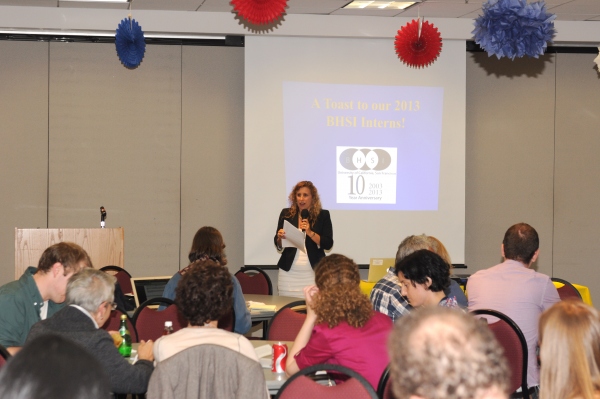 Bonnie Halpern-Felsher, founder and director of the Biomedical and Health Sciences Internship for High School Students,

welcomes students, mentors, alumni and others to the Aug. 8 event celebrating another BHSI graduating class and the

Serena Lau spent up to four hours a day for eight weeks this summer traveling between her Sunnyvale home and San Francisco to participate in a UCSF science internship program.

For this 17-year-old, who’s heading off to Yale University in the fall, the long commute was worth it.

“This program is really awesome,” Serena said at the conclusion of the program earlier this month.

UCSF’s Biomedical and Health Sciences Internship for High School Students (BHSI) aims to expose high school students to the professional world of science by matching them up with mentors through the Department of Pediatrics. 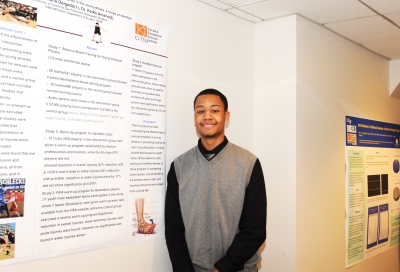 marizing his work this summer.

The program, which celebrated its 10th anniversary this year, has hosted about 165 students over the years. It’s one of several educational outreach programs that UCSF offers teens during the summer to give them real-world experiences in science, medicine and health.

Serena, the only senior among this summer’s 15 BHSI interns, worked closely with her mentor, UCSF orthodontist Snehlata Oberoi, DDS, MDS, an associate professor of orofacial sciences. They developed and administered a survey to see if young patients with retainers would be receptive to a wireless temperature sensor and mobile app that would track and improve wearing time.

“Having the chance to shadow her and do this project let me see a multifaceted life,” said Serena, who conducted “kid-friendly” interviews for the survey and watched Oberoi treat youngsters with cleft palates and other deformities.

The experience was equally enriching for the mentor.

“Working with young minds makes me feel younger,” Oberoi said. “These are the future citizens of our world. If I can have some impact on them, it motivates me.” 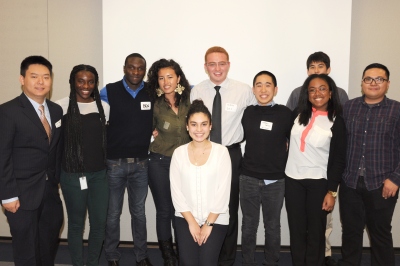 BHSI alumni reunite at the Aug. 8 celebration of the program's 10th anniversary in

the Garden Room of the Laurel Heights campus. From left to right: Ken Yang,

An Aug. 8 event celebrating BHSI’s 10th anniversary and the latest interns’ accomplishments included UCSF leaders, BHSI alumni and parents of the interns who gathered to view poster presentations about each intern’s research project. The interns – chosen from about 300 applicants – come from populations less represented in the biomedical and health sciences field and will largely be the first in their families to attend college. Nearly all graduates of the program have attended college.

“I’m really proud of her. She can do so many things at the same time,” said Serena’s mother, Fang Jiang, who emigrated from China in 1995.

Keynote speaker J. Renee Navarro, MD, PharmD, vice chancellor of Diversity and Outreach at UCSF, said the BHSI program is so outstanding that “it can be a life-altering opportunity for you.”

Bonnie Halpern-Felsher, PhD, founder and director of BHSI and a professor of pediatrics at UCSF, said a parent mentioned years ago that a person was not a vessel to be filled but rather a candle to be lit.

“You were already burning pretty brightly,” Halpert-Felsher told the interns before recounting their summer accomplishments, including conducting statistical analyses, synthesizing their findings, and articulating and presenting what they had learned.

“By the end of the summer, I had gained a greater appreciation and understanding of what science is, and what it takes to conduct good scientific research,”

Charles Irwin, MD, a distinguished professor of pediatrics at UCSF and director of its Division of Adolescent and Young Adult Medicine, said the program gave him a flashback to his high school years, when a doctor took him to Massachusetts General for the day. “I actually then decided to become a doctor,” Irwin recalled.

Conversely, he said, “Looking at the posters today, we see the different perspectives that adolescents have given to the researchers here.”

Anthony Trias, a 2005 BHSI alumnus, went on to college, got a master’s degree and a job at Genentech, and is now applying to medical school. High school gave him no opportunity to be independent, think critically and ask the right questions – but the UCSF program more than compensated.

A Community With the Same Passion

A week before BHSI marked its milestone anniversary, another summer youth program at UCSF also recognized its 20 interns with an Aug. 1 poster session at the end of their eight-week internships.

The UCSF Science & Health Education Partnership’s High School Intern Program is open to disadvantaged high school students in San Francisco public schools who work with mentors in basic science labs – in contrast with BHSI, which is open to public as well as private high school students throughout the Bay Area and extends to a broader spectrum of fields. 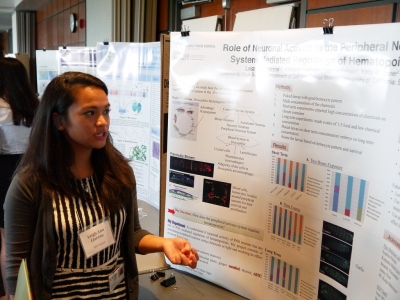 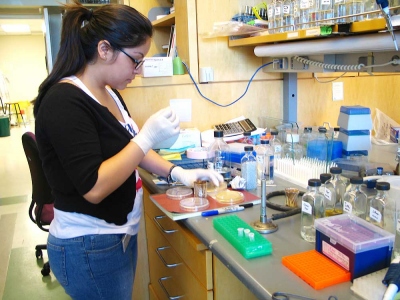 SEP intern Diana Velazquez from Abraham Lincoln High School plates yeast in the lab of Christine Guthrie, a professor in the UCSF Department of Biochemistry and Biophysics.

SEP intern Leigh Ann Llarena, 17, who is a senior at Leadership High, said the summer surpassed all her expectations. “I never thought I’d be considered a partner or fellow colleague in the lab and be able to conduct my experiments independently – and be part of this cutting-edge research,” she said.

Her project’s goal was to stimulate peripheral neurons in fruit flies to determine if neuronal activity in the peripheral nervous system is necessary to regulate blood cell formation in developing larvae. She found that four chemicals – garlic, cinnamon, menthol and allyl isothiocyanate – disturbed the normal hemocyte pattern.

“I’d never really dissected anything in high school,” Leigh Ann said. “Going through this program exposed me to all these techniques and machinery, and it expanded what I thought science would be. I thought you’d be working by yourself, but you’re actually part of a larger community with the same passion.”

SEP intern Jackeline Callejas, 17, starting her senior year at John O’Connell High, helped evaluate the behavior of B6 mice with a certain mutation.

“I was expecting the program to be a little easy,” Jackeline said. “To my surprise, I was filled with rigorous tasks – from performing tasks with the mice and analyzing data to putting together an abstract and having the opportunity to present in front of an audience. These were things that I never pictured myself doing.”

Jackeline said the program gave her many skills she can use in the future, including managing her time, public speaking, and becoming more organized and responsible.

Another example of the range of offerings for high school students is Camp Cardiac, a weeklong program aimed at exposing them to careers in medicine with a focus on heart health. 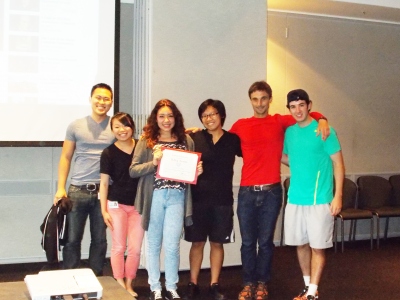 Camp Cardiac interns pose for a photo at the Aug. 9 event culminating their week-

This was the program’s first year at UCSF, which is not affiliated with the Chicago-based nonprofit but provided the medical students who planned the camp and acted as counselors. UCSF faculty and staff also helped out with lectures, hands-on activities such as a surgical knots workshop, and resources.

UCSF medical student Nicole Croom, the camp’s medical student director, said the 13 students came from all over the Bay Area for this year’s program, which ran Aug. 5 to 9. They could do things such as handle and feel the difference between normal and pathological hearts and aortas.

“It was good to have a focus, especially something so applicable to their everyday lives,” Croom said. “Cardiovascular health is important for everyone, as it is one of the leading causes of death in the world.”

Even students without a specific interest in cardiology were able to benefit.

“It gives high school students with an interest in the medical field exposure to their potential future career,” Croom said. “We didn't try to sugarcoat what it takes to become a doctor, and we even taught them about the range of other possible careers within the health care field and the wide variety of ways in which they can enter it.”