The ability to form blood vessels is one of evolution’s crowning achievements, and something that separates vertebrates (animals with a backbone) from the rest of the animal kingdom.

The two types of blood vessels, arteries and veins, are formed from the same precursor cell type – endothelial cells – that become committed to an arterial or venous cell fate during embryonic development. Yet precisely what drives this commitment, which is essential for shaping cardiovascular development, has long eluded researchers. 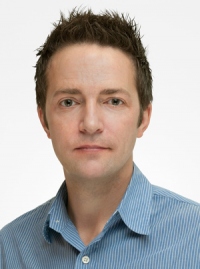 Now, scientists at the Gladstone Institutes have identified the molecular signals that direct this process. In so doing, they illustrate how even the most complex of biological systems can be directed by the most subtle shifts in molecular signaling.

In the latest issue of Developmental Cell, researchers in the laboratory of Gladstone senior investigator Benoit Bruneau, PhD, describe the precise order and timing of signals that spur the formation of arteries. Specifically, they piece together a molecular signaling pathway by which a protein called vascular endothelial growth factor (Vegf) directs the activation of Delta-like 4 (Dll4), which is critical to artery formation.

Arteries and veins each have different identities and distinct functions. Arteries carry oxygenated blood from the heart out to tissues, while veins carry unoxygenated blood back to the heart.

Understanding how arteries are made at the molecular level – and specifically how they differ from veins – is important not only for understanding diseases in which arteries and veins connect abnormally, but also to inform strategies for making new arteries, which could prove invaluable for treating coronary artery disease.

The key to this understanding lies with Dll4, one of the earliest known genes involved in artery formation.

In fact, scientists currently use Dll4 as a marker to identify which cells will grow and differentiate into arteries, and which will not. Dll4 works by binding to another protein – known as Notch – which in turn promotes artery formation.

But there is a third player in this process: Vegf. It is secreted from cells in the embryo, which among other things activates Dll4.

But exactly how Dll4, Notch and Vegf all work in concert to transform early embryonic cells into cells that form arteries has stumped researchers.

“We knew that Dll4, when activated, directs artery formation, but couldn’t pinpoint how it is activated in the first place,” said Bruneau, who is also a professor of pediatrics at UC San Francisco, with which Gladstone is affiliated. “Here, we’ve mapped the series of steps that precede Dll4 activation and that set the stage for the formation of arteries – shedding light into a so-called ‘black box’ of embryonic development.”

In this study, the team delved deep into the nucleus of cells belonging to mouse and zebrafish embryos – two important animal models of embryonic development – in order to determine how the Dll4 gene is turned on. They used sophisticated molecular biology approaches, together with experiments that deleted specific genes from the animal models, to fill in the steps that led from Vegf signaling to Dll4 activation.

And what they found was surprising.

“Vegf sets off a signaling cascade that eventually activates a group of proteins, called Mitogen Activated Protein Kinases, or MAPKs,” said Gladstone staff scientist Joshua Wythe, PhD, the paper’s lead author. “This, in turn, activates another group of proteins, called ETS transcription factors, and it is this signaling relay – from Vegf to MAPKs to ETS factors – that turns on an maintains Dll4 activity, helping the arterial cells grow and gain their cellular identity over time.”

In biology, a signaling cascade is a series of chain reactions that help cells amplify a particular signal – like a domino effect. Here, the research team identified Vegf as being the first domino, followed by the activation of MAPKs, then ETS factors and so on.

“Interestingly, the ETS factors aren’t specific to soon-to-be arterial cells, but rather they are present throughout the embryo,” explained Jason Fish, PhD, a former Gladstone postdoctoral fellow, now at the University of Toronto, who collaborated with the Gladstone team. “Instead, the Vegf signaling cascade alerts only those MAPKs and ETS factors within the realm of Dll4 – assuring only the correct cells grow and differentiate over time to form arteries.”

This research is important not only because it uncovers the molecular link between Vegf and Dll4, but also because it shows how signaling cascades like this one can direct genes – which are normally active throughout the embryo – to perform tasks only in specific cell types.

“In the future we will refine our approach to see whether this signaling cascade regulates other arterial genes in the developing embryo,” said Bruneau. “We hope this research will help inform clinicians into congenital defects related to the formation and maintenance of arteries and veins, and may also yield new strategies that can coax the development of arteries from stem cells—which may prove useful for treating coronary artery disease.”

Research scientist W. Patrick Devine, MD, PhD, and research associate Daniel He also participated in this research at Gladstone, which was supported by the American Heart Association, the California Institute of Regenerative Medicine, the DeGeorge Charitable Trust, the William H. Younger, Jr., Foundation and the National Institutes of Health.