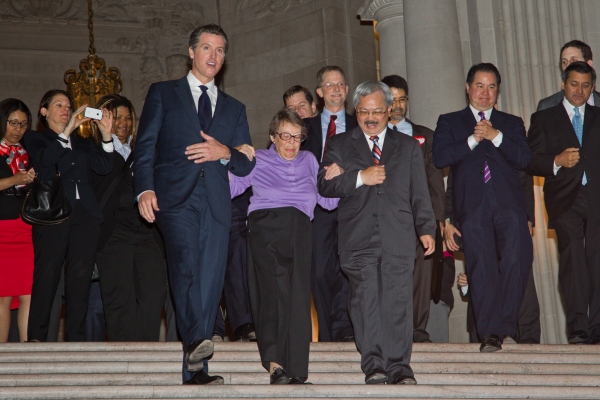 Lyon down the steps at City Hall while celebrating two Supreme Court rulings on same-sex marriage on June 26.

UC San Francisco has long been a leader in supporting the LGBT community.

Some 30 years ago, UCSF phyicians and allied health professionals at San Francisco General Hospital pioneered the care for HIV-positive patients, then mostly gay men, setting a national standard of practice known as the San Francisco model.

UCSF's Center for LGBT Health and Equity has been instrumental in raising the visibility and pride in the LGBT community, now more than 800 strong; ensuring that UCSF Medical Center provides the best possible care to LGBT patients and their families; and addressing LGBT issues in the health sciences curricula and at national health care forums.

UCSF is home to the Center of Excellence in Transgender Health that works to increase access to comprehensive and effective care for trans and gender-variant communities. It has hosted three national LGBTI summits, including one this year.

In 2012, UCSF Medical Center became the only institution in the United States to receive a perfect score on the national LGBT Healthcare Equality Index (HEI) for five consecutive years.

The score means that UCSF provides equitable, inclusive care for LGBT patients and their families, has nondiscrimination policies that cover patients and employees and offers LGBT health education for staff.

“Providing equal treatment to each and every patient is central to delivering the safest possible care,” Mark Laret, chief executive officer of UCSF Medical Center and UCSF Benioff Children's Hospital, said at the time.

“All patients need to feel free to share their stories and trust their health care providers. If not, we won't understand factors in their lives that may contribute to the quality of their care. I'm pleased that more hospitals are stepping up in their commitment to meeting the needs of LGBT patients and their families. It's simply the right thing to do.” 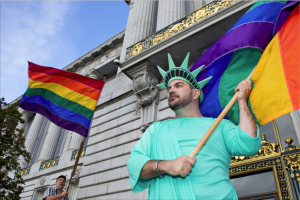 at UCSF, shows his commitment to civil rights

by dressing up as "Lady Li-bear-ty" outside San Francisco City Hall.

With Justice Anthony Kennedy writing for the 5-4 majority in the case United States v. Windsor, the high court struck down the section of the federal Defense of Marriage Act (DOMA) that defines marriage as between a man and a woman for purposes of federal law. This means that same-sex couples and their families are now entitled to a host of federal benefits, ranging from tax breaks to Social Security survivor payments.

In the case Hollingsworth v. Perry, the high court declined to rule on California's Proposition 8, the ballot measure approved by voters in 2008 that bans same-sex marriage. That decision keeps in place a lower court ruling that struck down Proposition 8 and effectively allows same-sex marriages to resume in this state.

Hundreds gathered at San Francisco City Hall on Wednesday morning to hear the news and the reaction from Mayor Ed Lee and Lt. Gov. Gavin Newsom. Joining them to witness history were two UCSF LGBT leaders who have been integral to the fight for equal rights: Diane Sabin and Stuart Gaffney. Together, they represent UCSF well in its commitment to diversity, a cornerstone of UCSF values and a key part of the University's strategic plan.

Sabin, executive director of the Lesbian Health and Research Center at UCSF, and her partner for 21 years, Jewelle Gomez, were among those to cheer the rulings. Feminist lesbian activists from the 1970s, they married two days before the Proposition 8 vote on Nov. 1, 2008, and agreed to be plaintiffs in the California case for equal marriage rights decided by the California Supreme Court that year.

“This day represents a major step toward achieving an open, inclusive and welcoming society,” said Sabin, who acknowledges that opponents to same-sex marriage will continue the fight in court. “Like any social justice movement, you don't reach the end, you stay involved in the process.”

For Sabin, also a director at the Osher Center for Integrative Medicine at UCSF, the ruling is a validation of her right to marry the person she loves.

“I feel a profound level of shock and very deep delight,” she said. “Personally, I have the ability to validate myself and the deep love I have, but now to have the acknowledgement and official institutional benefits on the federal level is really great.” 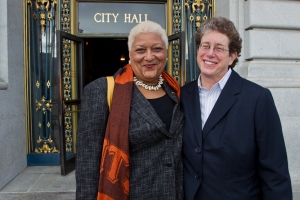 Jewelle Gomez, left, and Diane Sabin pose for a photo

Sabin says she hopes that other states will expand rights for not only the LGBT community, but others who are discriminated against or marginalized in society. She referenced two other decisions this week by the Supreme Court on the Voting Rights Act and affirmative action that left her wondering and worrying.

“I certainly hope that this encourages people in other states to recognize the humanity in everyone and to have an open door that this country is built upon and to understand the deep value of diversity," she said.

"That’s what I really appreciate about UCSF – this institution is working to create a welcoming and inclusive environment. More work needs to be done, but we are making progress.”

A Monumental Day in Fight for Equality

Coincidentally, UCSF announced on Wednesday the appointment of Larry D. Lariosa, MA, a licensed marriage and family therapist, as its diversity program manager and LGBT specialist for the Office of Diversity and Outreach.

“I am overwhelmed with emotion,” Lariosa said of the Supreme Court decisions. “This is a monumental day in our country's history and in our long fight for equality. The Supreme Court rulings on DOMA and California's Prop. 8 not only grant us our civil rights to marry; they will also have a profound psychological impact on our future generations. With this decision, LGBT people will grow up with the recognition that we are equal citizens and that our relationships are valid and sustainable. 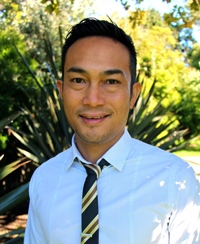 “In light of this morning's ruling, this is also an exciting time for me as I transition into my new role at UCSF," Lariosa added. "I look forward to serving as both a support and an advocate for our campus community.”

For UCSF’s Gaffney, who together with husband John Lewis have been leaders in the freedom to marry movement since 1987, the ruling represents a milestone for gay rights and equality. Gaffney is a senior policy analyst at the UCSF Center for AIDS Prevention Studies and works through the nationwide grassroots organization Marriage Equality USA.

“It’s hard to overstate the importance of today’s rulings," Gaffney said upon returning from City Hall. "It restores the freedom to marry in California and extends the full rights to marry nationwide. It is a watershed moment in our movement.”

After Gaffney married Lewis in San Francisco City Hall in 2008, they began working for equality for all LGBT couples and their families. UCSF told his story in 2007.

“Today, and at Pride, we will come together with our friends, family, colleagues, allies, and loved ones to stand as one community,” he said. “We will celebrate the return of marriage equality in California as our friends joyously begin to plan their weddings, and then tomorrow we will get back to work to ensure full equality from coast to coast.” 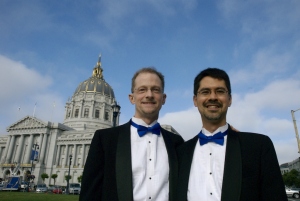 Stuart Gaffney and John Lewis pose for a photo after their

Gaffney says it will take more people coming out and telling their stories to move this nation forward in achieving equality in marriage, employment and other rights not granted in more than 30 states to members of the LGBT community.

"To be honest, it all comes down to making personal connections that change the hearts and minds of people across this country. This provides us the momentum and renewed energy to continue to work for equality nationwide. They also provide the legal grounding to make our case."

Many members of UCSF's LGBT community shared their reaction through social media channels.

Barbara J. French, vice chancellor for University Relations at UCSF, said on Facebook that it has been “an emotional morning. I couldn't have predicted how much a Supreme Court decision affirming my civil rights would affect me. Tears of joy.”

French co-chairs a University of California task force established last year to examine and implement strategies to create a more welcoming and inclusive environment for the LGBT community across the 10-campus UC system.

She recently shared her personal story on coming out in UCSF’s “It Only Gets Better,” video, which was nominated for a regional Emmy award.