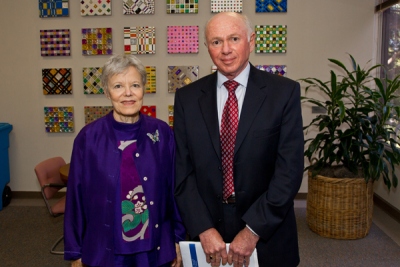 same-sex couples and their children at the UCSF Laurel Heights campus on June 3.

A panel of experts at UC San Francisco is calling attention to the fact that Social Security fails to provide lesbian, gay, bisexual and transgender (LGBT) couples and their families with the same benefits that heterosexual couples and their children receive.

“This is simply unfair and, in our view, intolerable,” said Carroll Estes, PhD, a UCSF professor who has devoted her career to studying Social Security and informing the public about its importance to economic security and quality of life for America’s families.

The June 3 symposium at UCSF was held as the Supreme Court is set to announce this month its decision on two cases related to the LGBT community: the Defense of Marriage Act (DOMA) and California’s Proposition 8. June is also LGBT Pride Month.

“Americans’ views of marriage equality are shifting rapidly,” said Estes, who is founding director of the UCSF Institute for Health & Aging. “We need to educate our society about Social Security. It is time to provide benefits to LGBT workers and their families.”

Estes, board chair of the National Committee to Preserve Social Security and Medicare Foundation (NCPSSMF), co-authored a report pointing out the inequities. The other co-author is Robin Maril, legislative counsel at the Foundation of the Human Rights Campaign.

The report, “Living Outside the Safety Net: LGBT Families & Social Security,” (PDF) was issued in February. It challenges Congress to “amend the Social Security Act to include same-sex domestic partners as eligible to receive equal benefits following the death, retirement or disability of a loved one.”

The authors also call for the repeal of DOMA, which created a federal definition of marriage that excludes same-sex couples. DOMA prevents surviving same-sex spouses from receiving Social Security benefits that they are otherwise entitled to receive.

Therese Stewart, JD, chief deputy city attorney in San Francisco who spoke on the panel at UCSF, says she is guardedly optimistic that the Supreme Court will overturn DOMA, which could erase disparities that exist for same-sex spouses. She’s not sure, however, if that ruling will mean that children in LGBT families will be entitled to Social Security benefits.

Approved by Congress in 1935 at the urging of President Franklin D. Roosevelt, Social Security is the primary source of most seniors’ retirement, without which over half of all older Americans would fall into poverty, according to the report. The critical safety-net program also supports non-retirees – 30 percent of whom are children, spouses and the disabled.

The symposium gave Max Richtman, president and chief executive of the National Committee to Preserve Social Security and Medicare, another opportunity to dispel the myths that program is doomed to go bankrupt.

He said Social Security will remain solvent for 22 years and that the 77-year-old program is not contributing to the national deficit. Richtman pointed to a May 31 report by the Social Security trustees that said if lawmakers take action to phase in changes to the program, they can minimize adverse impacts on vulnerable populations, including lower-income workers and people already dependent on program benefits.

One way to strengthen Social Security, Estes said, is for Congress to consider adjusting the payroll tax cap that limits all contributions to 6.2 percent for people earning more than $117,000. Today, billionaires, including Bill Gates and Warren Buffet, contribute the same amount of taxes to Social Security as those workers who earn that income.

Richtman urged the audience to get informed, especially young people who he quipped, “think they’re more likely to see a UFO than Social Security.”

He also asked people to call on their representatives to support Congresswoman Linda Sánchez’s legislation, Social Security Equality Act of 2012 (HR 4609), which would amend the Social Security Act to provide same-sex couples benefits that heterosexual couples get. The bill will be reintroduced in Congress. Today, it has 100 co-sponsors.

Historically, Congress has consistently improved and strengthened the Social Security Act to extend its reach beyond the original legislation. As a result of these changes, Richtman noted, workers’ spouses, children and the disabled are now eligible to receive benefits in their own right. The Act now covers millions of additional Americans who were originally excluded rom coverage, including domestic workers and agricultural workers.

Panelist Seth Kilbourn, executive director of Openhouse, a nonprofit, community-based organization that provides housing and other services to San Francisco’s LGBT seniors, says the nation’s 1.6 million LGBT seniors – a population that is expected to grow to 3 million by 2030 – face more challenges than their heterosexual peers.

Seth Kilbourn, left, executive director of Openhouse and a panel expert at the

after the event from audience member John Lam.

Systematic discrimination, coupled with the lack of uniform relationship recognition among states, increases the risk of poverty for same-sex couples, their children and the growing number of LGBT seniors, Kilbourn said.

The rate of poverty among America’s aging population ranges from 4.6 percent among heterosexual couples, 4.9 percent for gay couples and 9.6 percent for lesbian couples, he added, attributing sexism to the last statistic.

Estes emphasized the problem of sexism. The last report Estes co-authored titled, “Breaking the Social Security Glass Ceiling,” (PDF) concluded that women rely on Social Security as the primary source of their financial well-being in retirement.

“Social Security is all of our issue,” Estes said, noting that the LGBT community alone can’t bear the burden of defending it. “It is an earned benefit, but it’s also a social contract and we’re all in this together.”