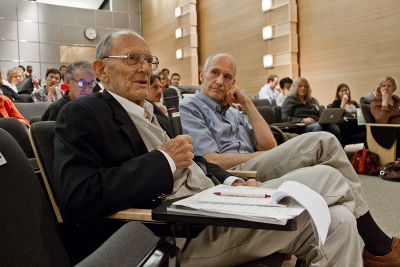 question during the bacterial therapeutics panel discussion at the Cell-Based

With cell therapy the drugs are alive. Cells are engineered and reprogrammed outside the body to perform specific tasks – and then given as treatment.

“Cells are like soft robots,” said Wendell Lim, PhD, director of the Center for Systems & Synthetic Biology at UC San Francisco and an organizer “Cell-Based Therapeutics: The Next Pillar of Medicine,” a daylong symposium held at UCSF’s Mission Bay campus last month.

Lim and other scientists aim to take advantage of the modules that already function within cells, and to manipulate them for specific therapeutic goals – sometimes by introducing new functions.

“We want to build therapeutic cells with precisely controlled activities,” Lim said. “We want to control how cells proliferate, where they go, how they are activated and how to turn them off or even destroy them when they are no longer needed.”

No small-molecule drug or genetically engineered biologic therapy can accomplish these tasks as well, according to Lim.

The April 12 symposium gathered together some of the nation’s leading scientists to share success stories and to focus on the medical horizons for stem cells, bacterial therapies and engineered immune cells.

Thanks to some of the first cell therapies studied in clinical trials, children and adults have been saved from leukemia after other drugs failed them, people have recovered from life-threatening Clostridium difficile bacterial infection that paradoxically can be triggered by antibiotic use, and remarkably, a few individuals paralyzed with spinal cord injury have regained a modest degree of sensation.

“We need to demonstrate that cell therapy is a viable product,” UCSF Executive Vice Chancellor and Provost Jeffrey Bluestone, PhD, said in kicking off the symposium.

For major chronic disease, cell therapies that only need to be administered once could save both lives and money, he added.

The following sessions highlighted some of the key areas in cell-based therapeutics:

Cancers arise from our own tissues, so the immune system cannot easily recognize tumor cells as abnormal invaders.

Symposium speaker Carl June, MD, professor of immunotherapy at the University of Pennsylvania, described how he and his colleagues have rejiggered the workhorse cell of the immune system – called the killer T cell – to make it more effective at targeting cancer.

Fewer than two-dozen clinical trial participants with advanced forms of leukemia have been treated to date, and follow-up for most has been less than a year. 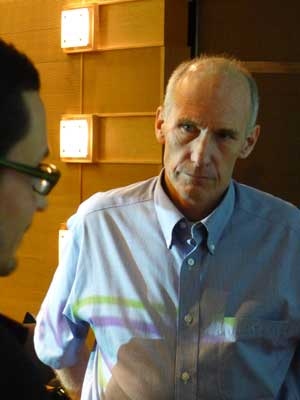 therapy at the University of Pennsylvania, talks with a colleague

Still, the results have been remarkable for patients expected to die after they had run through the standard chemotherapy treatment options. Most have had complete remissions – meaning cancer can no longer be detected within them.

Some of the youngest patients had a very aggressive type of acute lymphoblastic leukemia (ALL) – “normally a death sentence,” June said. But with the new immunotherapy, “four out of five children treated to date have had complete remissions,” he said.

The treatment works fast. In one girl, Emily Whitehead, who entered the study at age 6 and who now is one year beyond receiving the therapy, “One kilogram of tumor disappeared in 17 days,” June said. “The T cells did it all.”

And the T cells that do it live on within the patients.

Additional patients are being enrolled in leukemia clinical trials at Penn and other academic medical centers, and June described success in treating adults with leukemia too.

“Every one of these [treatments] came from an academic center with no involvement of the biotechnology industry,” June said. Success spurs interest, however, and Novartis and Penn established an alliance last December in which Novartis will sponsor further development of the therapy.

Bluestone works with a different type of T cell and strives to prevent immune reactions, rather than to rev them up. He’s developing immunotherapies to fight organ-transplant rejection, as well as diseases such as type-1 diabetes, in which the immune system attacks specific vital tissues.

Bluestone focuses on regulatory T cells – master cells within the immune system that put a damper on these autoimmune responses. They are a very small population of cells that emerge from the thymus, which makes all T cells.

Working with UCSF pediatric diabetes expert Stephen Gitelman, MD, and UCSF transplant immunologist Qizhi Tang, PhD, Bluestone has isolated and purified a population of T regulatory cells and expanded their numbers 1,000-fold in 10 days. In an effort to halt destruction of the pancreas, the researchers are enrolling patients in a Phase 1 clinical trial for adults ages 18 to 45 who have been recently diagnosed with type 1 diabetes and who still make some insulin.

“We now have the proof of principal that we can take these cells out of somebody, we can grow them up, put them back in, and they will survive long term,” Bluestone said. “We don’t know about their clinical efficacy yet.”

Lim, an expert in breaking down and putting back together the molecular modules within cells, like Bluestone and June, aims to develop the next generation of immunotherapies. He is experimenting with drugs and light exposure as a means of controlling the activation of cells used in treatment.

Bacteria that make us their home outnumber our own cells 10-fold, and their genes outnumber ours by about 100-fold. 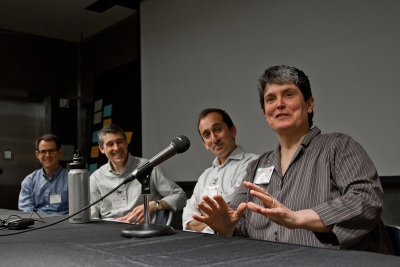 PhD; and Katherine Lemon, MD, PhD, participate in a panel discussion on bacterial

Researchers are exploring how microbial ecosystems within and upon us – and the thousands of species they contain — influence whether we are sick or well.

People differ in the combinations of bacteria they normally harbor. Some patterns have recently been associated with obesity and diabetes risk. But individual culprits, let alone remedies for undesirable bacteria, are hard to pin down. Many species present naturally do no harm unless they are given an opportunity to overgrow.

So far, there is little scientific research to support most marketing claims for “probiotic” supplements sold as good bacteria that can aid digestion or keep bad bacteria at bay. But researchers ultimately aim to develop scientifically proven, precisely targeted bacterial therapies to help prevent or remedy acute and chronic illnesses in which alterations to an individual’s healthy “microbiome” are implicated.

Antibiotics may vanquish their microbial target, but prime the gut for other pathogens in the process, said symposium speaker Justin Sonnenburg, PhD, of the Department of Microbiology and Immunology at Stanford University, whose work centers on germ-free mice that he colonized with bacteria in the lab.

“In the intestine, resources are kept at incredibly low levels because it is such a competitive environment, and as soon as you disrupt this really competitive ecosystem with antibiotics you allow a lot of these resources to build up to abnormally high levels that pathogens capitalize on,” he said. The pathogens trigger inflammation, and this chronic immune response holds healthy bacteria back, allowing troublesome pathogens to establish a niche.

In a talk titled “Nose Picking for Progress,” Katherine Lemon, MD, PhD, of the Forsyth Institute and Boston Children’s Hospital, described mining for strains of bacteria with potential to treat chronic afflictions such as asthma and sinus infection, including bacteria that help keep staph infection at bay. Lemon is one of 250 member of the Human Microbiome Project consortium, which recently determined that there are 10,000 microbial species that live in humans –  although not all of them live in any individual human.

“Bacterial cells are the best chemists on the planet,” and already carry out a lot of chemistry for our benefit, said symposium co-organizer Michael Fischbach, PhD, assistant professor in the Department of Bioengineering and Therapeutic Sciences at UCSF.

Most antibiotics derive form fungi and other organisms in nature, but Fischbach described research in which he uses genomics and bioinformatics to discover many natural antibiotics with therapeutic potential in previously unexamined gut microbes.

A third class of cell therapies that was featured at the UCSF symposium is stem cell treatment to regenerate tissue that has been damaged or lost due to disease or injury.

Stem cell treatments are making their way into human studies after more than a decade of development. 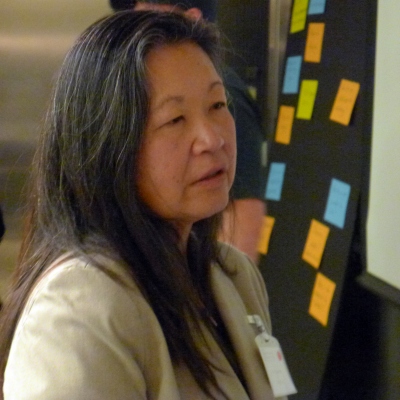 Fan Yang, PhD, assistant professor Bioengineering and Orthopaedic Surgery at Stanford University, described her research aimed at manipulating biomaterials and the cellular microenvironment within tissues to direct the functions of cells that are spun off from stem cells.

Tsukamoto first described a clinical trial, conducted at UCSF by David Rowitch, MD, PhD, professor of pediatrics, with young children who have a rare, fatal form of Pelizaeus-Merzbacher disease that results in failure to produce the insulating sheath, called myelin, required by nerves. Myelin also is lost in multiple sclerosis.