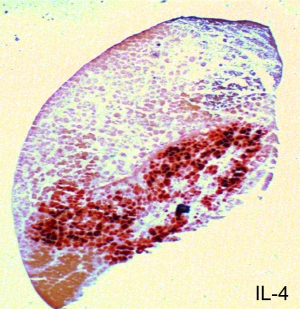 The finding in mice, published in the April 11 issue of Cell, showed that a well-known immune cell called the eosinophil  [ee-oh-SIN-oh-fil] carries out the beneficial role in two ways – by clearing out cellular debris from damaged tissue and teaming up with a type of cell that can make fat to instead trigger muscle regrowth.

The study, led by Ajay Chawla, MD, PhD, an associate professor of medicine at the UCSF Cardiovascular Research Institute, showed that after eosinophils move to the site of injury, they collaborate with a kind of progenitor cell – immature cells similar to stem cells – to drive the formation of new muscle fibers. The progenitors, called the fibro/adipogenic cells (FAP), do not spin off muscle cells directly.

FAP cells have been known for their role in making fat, which occurs as the body ages or experiences prolonged immobility. They also have been known to make cells that form connective tissue. But the UCSF study showed that FAP cells also team up with eosinophils to make injured muscles get stronger rather than fatter, at least in mice.

In a kind of cellular chain reaction, Chawla’s team found that when eosinophils at the site of muscle injury secrete a molecule called IL-4, FAP cells respond by expanding their numbers. And instead of becoming fat cells, they act on the true muscle stem cells to trigger the regrowth of muscle fibers. 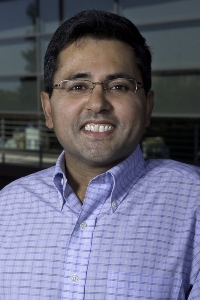 “They wake up the cells in muscle that divide and form muscle fibers,” he said.

Eosinophils help fight bacteria and parasites, as do other immune cells, but eosinophils are more often thought of for their maladaptive roles in allergies and other inflammatory reactions. Eosinophils comprise only a few percent of immune cells.

Chawla’s team found that, even before active muscle repair, the chain reaction initiated by eosinophils performs another necessary task – taking out the garbage.

“Eosinophils, acting via FAPs, are needed for the rapid clearance of necrotic debris, a process that is necessary for timely and complete regeneration of tissues,” Chawla said.

Bigger and more abundant immune cells called macrophages – with large appetites and a propensity to gobble up debris in other destructive scenarios – had often, but erroneously, been credited with cleaning up messes within distressed muscle tissue.

“Bites from venomous animals, many toxicants, and parasitic worms all trigger somewhat similar immune responses that cause injury,” Chawla said. “We want to know if eosinophils and FAPs are universally employed in these situations as a way to get rid of debris without triggering severe reactions such as anaphylactic shock.”

The National Institutes for Health and the California Institute for Regenerative Medicine funded the research.