A Phase 2 clinical trial testing a new protocol for treating a relatively rare form of brain cancer, primary CNS lymphoma, may change the standard of care for this disease, according to doctors at UC San Francisco who led the research. 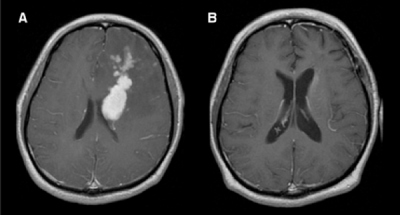 lymphoma patient treated with a combination of high-dose chemotherapy with

The new treatment approach was significantly less toxic because it avoided whole-brain radiotherapy, which at high doses can kill brain cells and lead to a progressive deterioration of the function of the nervous system in patients. Many patients die from the toxicity of the radiation as opposed to the cancer itself.

The new treatment also seemed to work better, with the majority of patients on the trial still alive with a follow-up of nearly five years, researchers found.

In addition, unlike previous treatments for primary CNS lymphoma, the new approach was equally effective in older patients – those over 60 – as it was in younger patients. This is particularly significant given that the incidence of this type of brain tumor appears to be increasing in patients 65 and older.

Rubenstein is a member of the UCSF Helen Diller Family Comprehensive Cancer Center, which is one of the country’s leading research and clinical care centers, and is the only comprehensive cancer center in the San Francisco Bay Area.

The work raises the possibility of taking a “personalized medicine” approach to guiding treatment for this form of cancer because the researchers identified a biomarker – a gene called BCL6 – which could predict the outcome of treatment depending on how much of the gene was present in the tumor.

A randomized clinical trial, which will test the effectiveness of the new therapeutic approach in a larger patient population, is now enrolling at UCSF and at other medical centers in the United States.

Primary CNS lymphoma is a deadly and debilitating form of non-Hodgkin’s lymphoma, which is the fifth leading cause of cancer in the United States. 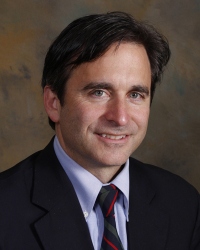 About 1,600 Americans are diagnosed with primary CNS lymphoma every year, and its diagnosis is made difficult because the disease is often mistaken for other forms of brain cancer or other neurological diseases such as Alzheimer’s or multiple sclerosis.

One of the unmistakable features of the disease, however, is its poor outcomes and its often severe and debilitating neurological symptoms. Unlike other forms of brain cancer, in which surgery is a front-line treatment, surgery is performed only to establish the diagnosis for primary CNS lymphoma because the tumors tend to be widely disseminated within the brain.

More than a decade ago, when Rubenstein arrived at UCSF, he was interested in changing this reality, and a dozen years ago he designed a new protocol with his colleagues in the UCSF Hematology and Bone Marrow Transplant Unit, led by Lloyd Damon, MD, based on combining chemotherapy with immunotherapy, which relies on biological drugs derived from immune system components.

“We were interested in developing a new therapy for these patients, with greater efficacy and less toxicity compared to the standard of care regimen,” Rubenstein said. By 2005, the UCSF regimen was being tested in a multicenter study.

The results of the Phase 2 multicenter clinical trial replicate the initial UCSF results with the regimen, which demonstrate that long-term survival is feasible in this disease.

In addition to UCSF, authors on this study are affiliated with the Cleveland Clinic; Duke University Comprehensive Cancer Center in Durham, NC; the University of Vermont in Burlington, VT; and Georgetown University Hospital in Washington, D.C.