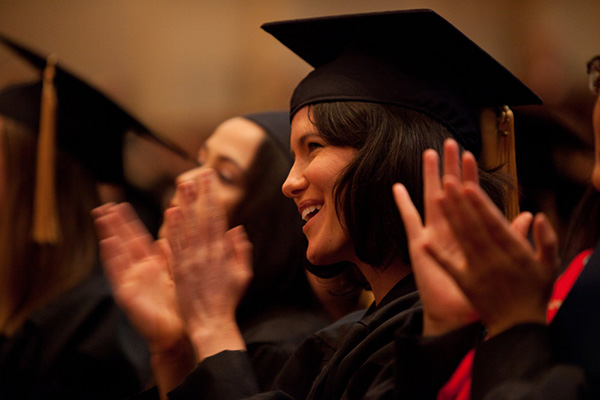 UC San Francisco’s School of Medicine ranked fourth nationwide in both research and primary care education this year, according to a new survey conducted by U.S. News & World Report.

Results are published in the magazine’s 2014 issue of “America’s Best Graduate Schools,” which appeared online Tuesday and will be available at newsstands on April 9. 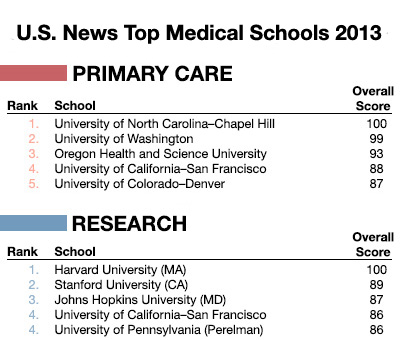 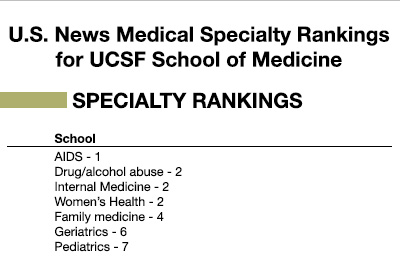 UCSF has the only school of medicine in the nation that ranks in the top five in both research and primary care education, including a tie for fourth place in research education, alongside University of Pennsylvania.

The new report also includes last year’s rankings for schools of pharmacy, in which UCSF ranked first for its Doctor of Pharmacy program (PharmD), and the 2011 rankings for nursing. In those, the UCSF School of Nursing ranked fourth for both its master’s of nursing program and its nursing-midwifery program. U.S. News does not rank dentistry schools.

“These rankings highlight UCSF’s commitment to educational excellence in the health sciences, which is key to advancing the field,” said UCSF Chancellor Susan Desmond-Hellmann, MD, MPH. “The students who attend UCSF’s graduate schools are an inspiration, preparing for a time of tremendous change and opportunity, ranging from our growing understanding of the molecular basis of disease to changing roles as health practitioners.”

The University also ranked in the top 10 in all medical specialty areas in which it was assessed. Among those, UCSF ranked first for its medical program in AIDS, second in both internal medicine and in women’s health, a tie for second in drug/alcohol abuse education, and fourth in family medicine.

These data measured such factors as acceptance rates, faculty resources and the number of graduates entering primary care. Research activity also was measured by funding from the National Institutes of Health, of which UCSF is the largest public recipient in the nation.

• 1st in Pharmacy – In 2012, the latest rankings available, UCSF topped the nation’s schools for its Doctor of Pharmacy program (PharmD).

• 4th in Nursing – In 2011, the latest rankings available, UCSF’s School of Nursing ranked fourth nationwide for both its master’s of nursing program and its nursing-midwifery program.