Nancy Pelosi, Democratic leader of the U.S. House of Representatives, said Friday that the federal government’s budget cuts through sequestration hurt the health and wellbeing of Americans. 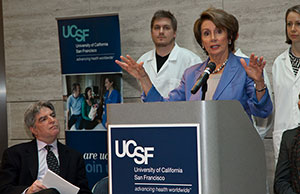 Democratic Leader Nancy Pelosi talks about the impact of federal budget cuts on public health and science at a news conference at UCSF Mission Bay on March 8 while Jeffrey Bluestone, executive vice chancellor and provost at UCSF, and others look on.

Pelosi, a longtime champion of public education, scientific research and UC San Francisco, joined scientists and city public health officials to call attention to the severe impact that across-the-board spending cuts would have on the nation at a news conference at UCSF's Mission Bay campus.

Pelosi said the solution is not difficult. It’s a matter of setting priorities. For her, it’s a simple choice to fund Meals on Wheels, which delivers food to homebound seniors, over giving tax breaks to tycoons for corporate jets. It’s a choice between ending subsidies for big oil companies versus funding Head Start, an early educational program for young children.

When people ask Pelosi what is her preferred agenda to stimulate the economy, create jobs and foster innovation in the U.S., she replies, “science, science, science and science.”

“Our purpose here today is to demonstrate how important investments in science are to us,” Pelosi told UCSF's graduate students, postdoctoral scholars, faculty, staff and others gathered in the atrium in Genentech Hall.

Jeff Bluestone, PhD, executive vice chancellor at UCSF, said now is not the time to cut the nation’s investment in life sciences research.

“This is an exciting time at UCSF and in the health sciences, overall,” he said. “Over the past decade, the Human Genome Project has contributed to a flood of research into the root causes of disease, as well as new understanding of the genetics of health and longevity. Nascent efforts in precision medicine – our ability to understand the building blocks of human health and disease in each individual – are transforming the way we will prevent, diagnose and treat disease. 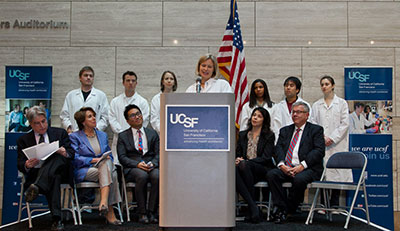 Diana Laird, an assistant professor at UCSF, speaks about the impact of federal sequestration on science at a news conference at UCSF Mission Bay.

“We are truly in the middle of a revolution in health sciences, a time we will look back on as the equivalent of the Industrial Revolution in the magnitude and pace of the advances we are seeing,” Bluestone said. “This revolution is being primarily funded by the federal government.”

Diana Laird, PhD, an assistant professor in the UCSF Department of Obstetrics, Gynecology and Reproductive Sciences, and the recipient two years ago of the prestigious Young Innovators Award from the National Institutes of Health (NIH), shared what the federal funding cuts would mean to research and young scientists.

“The sequestration cuts come in an already difficult environment and they are going to eliminate many young faculty like me,” she said. “But really more importantly these cuts will drive away the students who are training now, like the people standing behind me. Those students will see the daunting reality of 94 out of 100 unfunded grants and they will take their bright young minds someplace else more fertile – away from science and even abroad.”

Laird said running a lab is like running a small business. Her lab gets 90 percent of its funds from the NIH. If she has to think about raising money to support her stem-cell research, that’s time away from thinking about new directions to address infertility in women. The next grant she expects to write will be to develop an over-the-counter diagnostic tool that allows women facing the ticking of the biologicial clock to find out how many eggs they have left in case they want to choose motherhood. If the NIH cuts are too deep, she said, don't expect that diagnostic tool on the shelves at a pharmacy any time soon.

“The U.S. has been a powerhouse of innovation and discovery in biomedical research and it stands to lose its competitive edge as a result,” she said. “Furthermore, the cures and the diagnostics that would come from long-sought science would not be discovered or developed in the U.S. These budget cuts are really like killing our own stem cells. They’re slowly going to destroy our potential.”

U.S. Lagging in its Support of Science

Although Bluestone noted that UCSF doesn’t know for sure what impact the sequestration will have on the University, he does know that the United States is lagging in its support of science.

“We know that to remain a world leader, we need to invest heavily in science, technology, engineering and math,” he said. “Over the last three years, the NIH budget has actually decreased, and as a share of our total GDP, the U.S. has dropped to 10th worldwide in research spending. By contrast, China has just pledged a 20-percent increase in science funding for each of the next five years. The U.K. has pledged to increase funding by 20 to 30 percent over the same time.” 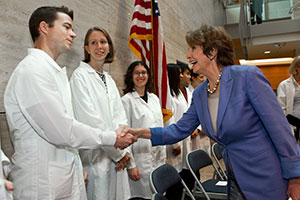 At UCSF, these federal funds are critical. UCSF received $532 million, the most NIH funds of any other public institution in the U.S. in 2012.

“As the largest public recipient of highly competitive NIH funds, UCSF is a leader in both fundamental and translational research,” Bluestone said. “From the early discoveries of recombinant DNA to recent advances in understanding cancer development, longevity and even the creation of an artificial kidney, the research here at UCSF has had an immeasurable impact on our understanding of human health.”

Others to speak out against the potential damage that federal sequestration may cause included Colleen Chawla, deputy director of the San Francisco Department of Public Health, who discussed the impact of these cuts on local public health programs.

Chawla said that sequestration would bring “devastating cuts” to the San Francisco Department of Public Health in the amount of $6.2 million annually. These cuts mean a loss of public funding for substance abuse and mental health counseling services and funds for HIV testing, medication and treatment.

Lance Toma, executive director of the Asian & Pacific Islander Wellness Center, whose programs provide early testing and treatment for patients with HIV and AIDS, said the new round of reductions – on top of cuts to the Ryan White Act – “mean the difference between life and death.” He told the story of a homeless patient named Andre, who was near death before being treated through the program which provides counseling, testing, food and health care. Andre’s viral load is now undetectable.

“Without these funds, HIV would be a death sentence,” Toma said. “We are better than this. We are fighters and we don’t give up the values that make us San Franciscans, Californians and Americans.”

John Gressman, president and CEO of the San Francisco Coalition of Community Clinics, a nonprofit organization which provides care to 95,000 underserved members of the community, said sequestration cuts would equate to an $18 million annual cut. He, too, challenged the nation to make health care a priority.