The UCSF community is mourning the loss of Maurice Galante, MD, professor emeritus and a renowned surgeon at UCSF for more than 50 years, who passed away at his home on Feb. 5, 2013. He was 93. 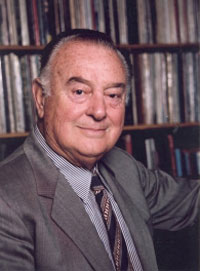 A memorial service to celebrate Galante's life will be held on Friday, March 8 from 4 to 6 p.m. at UCSF's Parnassus Heights campus in the Golden Gate Room, Millberry Union, 500 Parnassus Ave., San Francisco.
A native of the island of Rhodes when it was considered part of Italy, Galante was educated in the United States, receiving his MD degree with honors from Ohio State University in 1944. He interned for one year at the Morrisania City Hospital in New York before moving to San Francisco to begin his residency in general surgery at UCSF.
Galante completed his residency training in 1952 after an interruption of several years for Army service in the 82nd Airborne Division at Fort Bragg, North Carolina. Galante has been described as “one of the last of a generation of real general surgeons,” those surgeons who bring the same superb technical expertise to a wide variety of surgical procedures.
His colleagues say Galante brought a rare humanism to his 50 years as a surgeon at the UCSF School of Medicine. The scores of residents he trained were the fortunate recipients of a course in medical ethics and surgical attitude while learning surgical skills from a master. Galante also developed a special relationship with his patients because of his sensitivity to their pain and suffering, his colleagues say.
As dedicated as he was to patient care, Galante also was committed to securing the ability to advance research and shared knowledge. He helped establish the Maurice Galante, MD, Distinguished Professorship, the Maurice Galante, MD, Lectureship Series and the Maurice Galante, MD, Research Fund in the Department of Surgery at UCSF. The many people whose lives he touched helped to fund these important programs.
This year marks the 16th anniversary of the Maurice Galante, MD, Lectureship Series and featured Malcolm Gladwell, a staff writer with The New Yorker magazine since 1996. The video of the Feb. 22 lecture can be watched online.
Galante is survived by his wife Patricia; children Philip, Michel and Danielle; daughters-in-law Lori (Birnbaum) Galante and Carol (McGonnell) Galante, and grandchildren, Ondine and Lily.
In lieu of flowers, the family asks that individuals consider making a donation to Maurice Galante, MD, Research Fund at UCSF. Donations can be made online at makeagift.ucsf.edu/surgery or via check, made payable to the UCSF Foundation and including “Maurice Galante, MD, Research Fund” in the memo line. Donations can be sent to Regan Botsford, 220 Montgomery St., 5th Floor, San Francisco, CA 94104. Botsford can also be reached at 415/502.1573 or [email protected].