The spread of breast cancer to distant organs within the body, an event that often leads to death, appears in many cases to involve the loss of a key protein, according to UC San Francisco researchers, whose new discoveries point to possible targets for therapy.

In the Jan. 27 online edition of Nature Cell Biology, UCSF scientists describe for the first time how the protein, known as GATA3 — which is abnormal or absent in many cases of human breast cancer — normally acts downstream in biochemical pathways to prevent the distant spread of cancer, an event called metastasis.

The discovery points to a biochemical control point that simultaneously holds in check several key events required for tumor cells to successfully spread.

“When GATA3 is present, it turns off many genes that are active in metastasis,” said Zena Werb, PhD, a UCSF professor of anatomy who led the research. “We now have identified the molecular mechanisms involved.”

The key finding of the new study is that GATA3 acts downstream biochemically to activate a molecule — obscure until now — called microRNA29b. MicroRNA29b in turn stops protein production from other genes that play vital roles in metastasis.

The absence or loss of GATA3 can free cancerous cells to break free from their defined roles and tethers within a tumor, to move away from the tumor mass, to induce cancer-promoting inflammation, and to stimulate the development of new blood vessels that can help spreading cancerous cells regrow as tumors in new locations.

“People knew that some of these genes were turned on in some cancers, but they did not know they were turned on because GATA3 and microRNA29b were turned off,” Werb said. “If you have 20 genes that are becoming less active all at once due to microRNA29b, it could have a profound effect.”

In the mouse models of breast cancer studied by Werb’s team, GATA3 normally restrains cancerous cells from breaking away from the main tumor and migrating to other organs.

It might be possible, Werb said, to develop drugs that inhibit breast cancer metastasis by re-activating these controls in cancerous cells that have lost the normal protein.

Cancerous Cells and Their Environment

Many researchers who study early stages of cancer focus on abnormal genes and proteins that cause cells to expand their numbers rapidly, a hallmark of cancer. 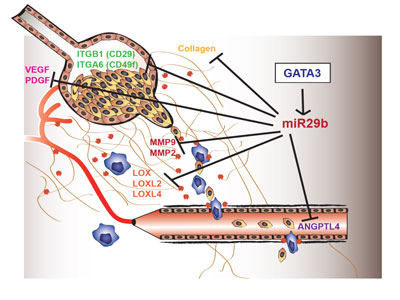 Breast cancer may spread from milk ducts through surrounding tissue and then through the blood to distant body parts when tumor cells stop making the protein GATA3 normally. When present, GATA3 acts through microRNA29b to block many downstream proteins, thereby preventing cells from acquiring these capabilities.

However, the ability to spread to distant places and to eventually cause lethal complications requires not only cell division and tumor growth, but also changes in how the cancerous cell negotiates with its surroundings. This relationship must be altered to permit cancer to spread, according to earlier research findings by Werb and others.

“Many of the key processes in cancer that GATA3 suppresses take place outside the cell, in the surrounding environment,” she said.

GATA3 is a master control for luminal cells, which line the milk-carrying ducts of the breast. In essence, GATA3 dictates the defining characteristics of a normal breast cell, Werb said.

“The targeting we would like to do is to give back microRNA29b specifically to breast tumor cells to prevent metastasis,” Werb said.

The research was funded by the National Institutes of Health and the Department of Defense.