Researchers in California and Switzerland have discovered that melanomas that develop resistance to the anti-cancer drug vemurafenib (marketed as Zelboraf), also develop addiction to the drug, an observation that may have important implications for the lives of patients with late-stage disease. 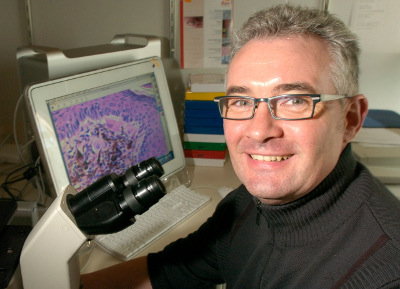 The team, based at UCSF, the Novartis Institutes for Biomedical Research (NIBR) in Emeryville, Calif., and University Hospital Zurich, found that one mechanism by which melanoma cells become resistant to vemurafenib also renders them “addicted” to the drug. As a result, the melanoma cells nefariously use vemurafenib to spur the growth of rapidly progressing, deadly and drug-resistant tumors.

As described this week in the journal Nature, the team built upon this basic discovery and showed that adjusting the dosing of the drug and introducing an on-again, off-again treatment schedule prolonged the life of mice with melanoma.

It is therefore possible that a similar approach may extend the effectiveness of the drug for people – an idea that awaits testing in clinical trials.

Investigated through a public-private partnership, the research was spearheaded by the study’s first author Meghna Das Thakur, PhD, a Novartis Presidential Postdoctoral Fellow, who was co-mentored by McMahon at UCSF and Darrin Stuart, PhD at NIBR.

McMahon is supported by the Melanoma Research Alliance, the National Cancer Institute and the UCSF Helen Diller Family Comprehensive Cancer Center, which is one of the country’s leading research and clinical care centers, and is the only comprehensive cancer center in the San Francisco Bay Area.

Melanoma is the most aggressive type of skin cancer, and in 2012 alone, an estimated 76,250 people in the United States were newly diagnosed with it. Some 9,180 people died last year from the disease, according to the National Cancer Institute.

As with all forms of cancer, melanoma starts with normal cells in the body that accumulate mutations and undergo transformations that cause them to grow aberrantly and metastasize. One of the most common mutations in melanoma occurs in a gene called BRAF, and more than half of all people with melanoma express mutated BRAF.

In 2011, the U.S. Food and Drug Administration (FDA) approved the drug vemurafenib for patients who have late-stage melanoma with mutations in BRAF after clinical trials showed a significant increase in survival for such patients when taking the drug. The drug’s benefits do not last forever, though, and while their tumors may initially shrink, most people on vemurafenib suffer cancer recurrence in the long run with a lethal, drug-resistant form of melanoma.

In the laboratory, the same phenomenon can be observed in mice. When small melanoma tumor fragments are implanted in mice, the tumors will initially shrink in response to drug, but eventually the mice will cease to respond to the drug and their tumors will re-emerge in a resistant form.

Targeting the Mechanism of Resistance

Working with such laboratory models, the UCSF and NIBR research teams were able to determine the mechanism of resistance. They discovered that when melanoma cells are subjected to vemurafenib, they become resistant by making more of the BRAF protein – the very target of the drug itself.

The idea for intermittent dosing came directly from this insight.  If by becoming resistant to vemurafenib’s anti-cancer potency, melanoma also becomes addicted to it, Das Thakur and her colleagues reasoned, then drug-resistant tumors may shrink when the vemurafenib is removed.  That’s exactly what they observed.

“Vemurafenib has revolutionized treatment of a specific subset of melanoma expressing mutated BRAF, but its long-term effectiveness is diminished by the development of drug resistance,” said McMahon, the Efim Guzik Distinguished Professor of Cancer Biology in the UCSF Helen Diller Family Comprehensive Cancer Center. “By seeking to understand the mechanisms of drug resistance, we have also found a way to enhance the durability of the drug response via intermittent dosing.”