Two heads are better than one, as the saying goes – and a new study by a duo at UCSF demonstrates how having two attending surgeons in the operating room during spinal surgeries can benefit patients in multiple ways.

Most spinal surgeries in the United States are performed by teams led by a single attending surgeon – one top-level doctor who has completed medical school, residency and other specialized training.

In 2007, two spinal surgeons in the Departments of Neurological Surgery and Orthopedic Surgery joined forces and began doing certain complex, high-risk procedures together, and now they have published their findings on the benefits of having them both in the operating room. 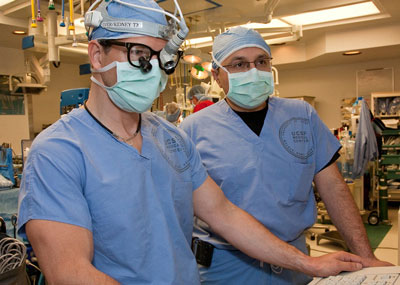 UCSF neurosurgeon Christopher Ames, MD, left, and orthopedic surgeon Vedat Deviren, MD, work together in the operating room during a spinal surgery. The two have published a study showing the benefits of having two attending surgeons, instead of one, perform these complex procedures.

Published this month in the inaugural issue of “Spine Deformity,” the official journal of the Scoliosis Research Society, the data show that surgeries with two attending physicians tended to be much shorter, averaging five hours instead of eight. Patients also suffered less blood loss, had fewer major complications and enjoyed shorter hospital stays – all of which should help lower health care costs, though the UCSF team did not specifically model how much money this approach would save if widely implemented.

The major benefit to patients is more favorable outcomes, said Deviren. “There is no way we would go back to how we used to perform these surgeries with single surgeons,” he said.

A Complex Surgery for Scoliosis

The idea to have multiple attending surgeons perform complicated surgeries is not new to medicine. Many complicated procedures that fall under other specialties, such as cardiac surgery, are performed in this way. But the UCSF research was the first study to demonstrate the effectiveness of the approach in spinal surgeries.

The particular complex procedure considered in the study is called a pedicle subtraction osteotomy, a surgery that realigns the spine in cases of very severe deformities, many of which arise from alignment complications of prior surgery and severe degenerative spinal arthritis.

Adult spinal deformity is becoming more common as the baby boomer population ages, as is the demand for the corrective surgery, said Ames. “Older adults are demanding higher levels of function as they get older,” he said. 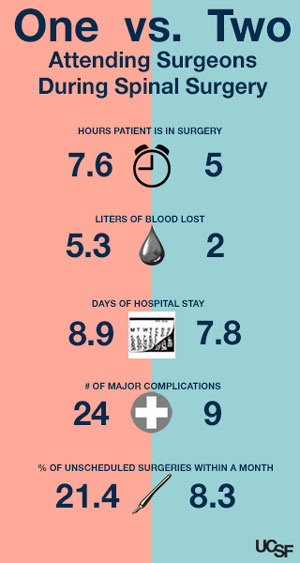 UCSF has top-ranking programs in both neurological and orthopedic surgery and is a referral center for particularly complex, high-risk spinal surgeries. Surgeons at UCSF currently perform over 75 such operations every year – many on older patients who may have osteoporosis, heart problems and other age-related issues that make the surgeries even more complicated.

After they began collaborating five years ago, Ames and Deviren became convinced that working together had a positive impact on their patients, but they wanted to quantify how much. They compared 42 patients who underwent the surgery at UCSF with a single surgeon, versus 36 patients who had the same procedures under the care of two attending surgeons.

They found that in addition to spending less time in the operating room, patients in the group with two surgeons suffered half as much blood loss on average during surgery and were much less likely to have major complications or unplanned additional surgeries within a month of their original operation.

For Ames and Deviren, these tangible benefits are fundamentally no different from those that patients might reap by using a new drug or some other clinical intervention. The bottom line, Ames said, is that the data suggests having two attending doctors is better and safer.

“If you had a drug or device that would result in this kind of improvement in treatment , of course you would give those to your patients,” he said.