The rate of cancer survival is expected to keep climbing in coming years largely thanks to research discoveries that are translating into new cancer drugs, which currently account for roughly 30 percent of the pharmaceutical dollar, the chief scientific officer at Bristol-Myers Squib recently said at a showcase event for the UCSF Helen Diller Family Comprehensive Cancer Center. 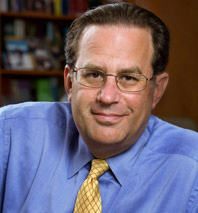 “Improvements in innovation in detection, prevention and treatment have provided real gains against cancers over the past few decades,” Elliott Sigal, MD, PhD, also Bristol-Myers Squib's president of research and development and a former UCSF medical resident, said during his Nov. 7 keynote address at the cancer center.

“Overall, age-adjusted, five-year survival rates in the U.S. have increased by more than one-third since 1975,” Sigal noted. “What’s more, it is estimated that advances in drug therapy – pharmaceuticals – accounted for half or more of these increases in survival rates.”

Sigal discussed three areas of innovation that he said were almost certain to continue to drive cancer survival upward.

The first is an explosion of genetic discoveries that are leading to innovations in drug design and to the better tailoring of treatments to the characteristics of individual tumors, Sigal said. The second is the development of better chemical strategies for delivering drugs to targeted cancer cells within the body. The third thrust is the pharmaceutical manipulation of the body’s own immune system to more aggressively attack cancerous cells.

The successful translation of research discovery into better outcomes for patients depends on companies, universities and government, according to Sigal. “We live in an ecosystem of contributions in the biomedical enterprise: small companies, large companies, government funding – and very importantly – academic researchers,” he said. “Without any one piston of the engine firing, things will fail.”

The UCSF Helen Diller Family Comprehensive Cancer Center, which recently received a renewal grant from the National Institutes of Health (NIH), unites top scientists with exceptional medical practitioners. Their interdisciplinary teamwork enables them not only to make key scientific discoveries, but also to ensure that the knowledge gained leads to better treatments for patients. UCSF’s long tradition of excellence in cancer research includes, notably, the Nobel Prize-winning work of J. Michael Bishop, MD, UCSF chancellor emeritus, and Harold Varmus, MD, who discovered cancer-causing oncogenes. Their work opened new doors for exploring genetic mistakes that cause cancer, and formed the basis for some of the most important cancer research happening today.

The discovery of genetic alterations within cells that drive molecular events leading to their out-of-control growth – and to tumor formation, growth and spread – has changed the way medical researchers think of cancers and their treatment.

Cancer researchers have been working with the National Institutes of Health to construct the Cancer Genome Atlas, a catalog of the mutations that are responsible for normal cells becoming cancerous. This growing understanding of mutations in cancer in turn has led to a better understanding of the chains of biochemical events that make a cell cancerous and to the identification of many new molecular targets for pharmaceutical development, Sigal said. This new knowledge also has been used to identify more effective ways to use already marketed drugs.

“Scientists and physicians are beginning to understand the underlying variability of how patients respond to the same drug treatment,” Sigal said.

Tumors have always been named for the organs in which they originate, but when it comes to drug treatment they now are being thought of more often in terms of genetic mutations and their implications, many of which are shared across organ types, Sigal said.

For example, Sigal said, “Some lung cancers may respond to drug therapy more like a select set of colon cancers, or like some prostate cancers, rather than like other types of lung cancer.” Increasingly, biomarkers and genetic tests are available to identify tumors that will respond best to particular treatments. Now drug companies can test experimental treatments in subsets of patients expected to have the most benefit.

“You could theoretically have a smaller and faster clinical program,” and be less likely to miss recognizing an effective treatment, Sigal said.

Attacking Tumors with Fewer Side Effects

Some immune antibodies that target molecules that often are present on certain types of tumors already have been developed and marketed as cancer drugs, but combining antibodies with existing chemotherapies, which are powerful toxins, is another promising approach.

Sigal described an area of treatment he called “antibody-directed cytotoxics,” in which standard chemotherapies are better targeted to tumors to minimize side effects on normal tissues throughout the body.

However, new chemical strategies hold promise, he added, especially those that use chemical “linkers” with special properties to attach an antibody to a drug and to release the active drug within a tumor cell.

“You can use the homing mechanism of the antibody to be very, very specific, and the nature of the chemistry to release the cytotoxic agent only when necessary and only when effective,” Sigal said.

It’s been a century since physicians first recognized that tumors occasionally regressed when the immune system was activated as a result of an acute infection.

But only in recent years have scientists uncovered many of the details about how immune responses begin, end and are directed to specific targets. Now they have begun to manipulate these responses. Normally the immune system accepts a tumor as part of the self, but academic researchers and drug companies have conspired to successfully rev up the immune system to fight cancer.

UCSF researchers and oncologists have played a key role in developing and testing immunotherapies that enhance the body’s own immune response. These treatments include Yervoy, which releases the brakes that hold back the immune system from fighting cancer, and Provenge, which in 2010 became the first vaccine approved to treat any cancer. Provenge was approved for the treatment of prostate cancer, following early studies led by UCSF oncologist Eric Small, MD.

Vervoy was shepherded through the final stages of clinical trials by Bristol-Myers Squibb and now is an approved treatment for melanoma, the most deadly skin cancer. The pharmaceutical giant bought both of the smaller companies that first developed and combined two different drug strategies to create the new treatment, which is based on scientific discoveries by James Allison, PhD, a former member of the UC Berkeley faculty and of UCSF’s cancer center, who now chairs the University of Texas MD Anderson Cancer Center Department of Immunology.

“We’re used to delivering an agent and watching the tumor shrink, but in this case you incite an inflammatory reaction and the tumor swells,” Sigal said.  “Many of our competitors missed this scientific fact and thought it actually was progression of disease.”

Melanomas, however, have completed vanished among a significant fraction of patients treated with Yervoy without returning for five years or more, Sigal said, and for all melanoma patients treated in clinical trials, the likelihood of survival has roughly doubled. “Once the immune system is reactivated the responses to fight tumors can be quite profound and quite durable,” he said.

Sigal wants to better target the drug to patients most likely to benefit, but the company also aims to evaluate Yervoy combined with radiation, or with traditional chemotherapy or with other drugs that activate the immune system. The focus of these clinical trials will be prostate, ovarian and lung cancer, Sigal said.

Universities have been a major source of new drugs, and strong ties between sectors remain crucial to developing better treatments and improving cancer survival, according to Sigal.

“A focus on partnerships to extend our reach and scope has been critical to all R&D [research and development] organizations,” he said. “We’re in a very globally interconnected world. Science is more and more complex. The regulatory environment is very demanding, and we are all resource-constrained. Research grants are very hard to come by. …  And we have to share our ideas and resources more than ever. Academia is critical to everything that the industry does.”