Songs are a common tool to help preschool children learn the fundamentals, such as the alphabet.

One UCSF professor is showing how the same approach can help learners at the opposite end of the educational spectrum: medical students, medical residents and other highly-trained professionals who need to continually memorize ever more fine details of human health and disease as they progress in their specialties.

While mastering an extensive command of gross and subtle human biology is more complex than memorizing the A-B-C’s, putting some of the most essential facts to music is a helpful way to learn, said Arie Perry, MD, a professor of pathology and neurological surgery and the director of neuropathology at UCSF. 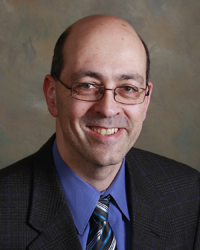 “People who sit through hundreds of hours of lectures and just go through rote memory over and over again might appreciate something different to help them learn,” Perry said.

He first began putting lyrics to music years ago to help people recognize how the signs of brain cancer, Parkinson's, Alzheimer's, multiple sclerosis and other neurological diseases can be seen under the microscope.

It began quite by accident, during his medical residency at the University of Texas Southwestern Medical Center in Dallas: “We had a weekly conference where we presented cases to our attending [doctors],” he said. “One of the weeks, one of the attendings said that the residents weren’t entertaining enough.”

Perry aimed to correct this in the very next case he presented.

“The following week, I showed the glass slides under the microscope and then at the end of the presentation, I pulled out a guitar and I sang the ‘Schwannoma’ song,” he recalled. “By the end of the song, there were about two to three times as many people because everybody walking by the hallway came in.”

In a recent lecture about brain cancer pathology delivered to a room packed full of medical residents in the UCSF Department of Neurological Surgery, Perry concluded his hourlong lecture by summarizing the material in a song titled, "Meningiomas." The lyrics were chock-full of important information about this form of tumor:

From the surface of the brain and the arachnoidal membrane
Grows a dural neoplasm, meningioma is its name
As a tumor of adults, with sharp margins and slow growth,
It may require the gamma knife, or surgery alone

Though most are low-grade, with a bland histology,
There's an aggressive subset, with significant morbidity
Atypical meningiomas, recur quite frequently
Anaplastic cases have a high mortality

Perry said he has had a number of former students return to say that they still remember the words to one of his songs like “Meningioma” years later.

UCSF neurologist S. Andrew Josephson, MD, who co-directs the core neuroscience curriculum for medical students, has known Perry since they were both at Washington University in St. Louis together, and he regularly invites Perry to lecture (and sing) to UCSF’s aspiring doctors.

“The ability to make these creative songs that help you learn neuropathology is pretty engaging for students,” Josephson said. “I find that a lot of our students in the Brain, Mind and Behavior course are listening to recordings of these songs as they try to prepare for an exam and are whistling them down the hallway.”

A few years ago, Perry recorded a CD with 16 of his favorite songs, and he was recently the subject of a profile in the San Francisco Chronicle.

While he said that the approach is not for everybody, he knows it can help many people. “It’s easier to remember some of the key facts through music,” he said. “Especially if you have a good musical memory.”