Scientists at the Gladstone Institutes have defined for the first time a key underlying process implicated in multiple sclerosis (MS) — a disease that causes progressive and irreversible damage to nerve cells in the brain and spinal cord. This discovery offers new hope for the millions who suffer from this debilitating disease for which there is no cure. 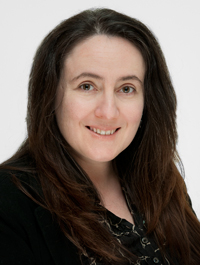 Researchers in the laboratory of Gladstone Investigator Katerina Akassoglou, PhD, a professor in neurology at UCSF, have identified in animal models precisely how a protein that seeps from the blood into the brain sets off a response that, over time, causes the nerve cell damage that is a key indicator of MS. These findings, which are reported in the latest issue of Nature Communications, lay the groundwork for much-needed therapies to treat this disease.

MS, which afflicts more than two million people worldwide, develops when the body’s immune system attacks the brain. This attack damages nerve cells, leading to a host of symptoms including numbness, fatigue, difficulty walking, paralysis and loss of vision. While some drugs can delay these symptoms, they do not treat the disease’s underlying cause — which researchers are only just beginning to understand.

“To successfully treat MS, we must first identify what triggers the disease and what enables its progression,” said Akassoglou, who also directs the Gladstone Center for In Vivo Imaging Research. “Here, we have shown that the leakage of blood in the brain acts as an early trigger that sets off the brain’s inflammatory response — creating a neurotoxic environment that damages nerve cells.”

Akassoglou and her team reached this conclusion by using advanced imaging techniques to monitor the disease’s progression in the brain and spinal cord of mice modified to mimic the signs of MS. Traditional techniques only show “snapshots” of the disease’s pathology. However, this analysis allows researchers to study individual cells within the living brain — and to monitor in real-time what happens to these cells as the disease worsens over time.

“In vivo imaging analysis let us observe in real-time which molecules crossed the blood-brain barrier,” said Dimitrios Davalos, PhD, Gladstone staff research scientist, associate director of the imaging center and the paper’s lead author. “Importantly, this analysis helped us identify the protein fibrinogen as the key culprit in MS, by demonstrating how its entry into the brain through leaky blood vessels impacted the health of individual nerve cells.”

Fibrinogen, a blood protein that is involved in coagulation, is not found in the healthy brain. In vivo imaging over different stages of disease revealed, however, that a disruption in the blood-brain barrier allows blood proteins — and specifically fibrinogen — to seep into the brain. Microglia — immune cells that act as the brain’s first line of defense — initiate a rapid response to fibrinogen’s arrival. They release large amounts of chemically reactive molecules called ‘reactive oxygen species.’ This creates a toxic environment within the brain that damages nerve cells and eventually leads to the debilitating symptoms of MS.

Importantly, the team found a strategy to halt this process by genetically modifying fibrinogen in the animal models. This strategy disrupted the protein’s interaction with the microglia without affecting fibrinogen’s essential role as a blood coagulant. In these models, the microglia did not react to fibrinogen’s arrival and did not create a toxic environment. As a result, the mice failed to show the type of progressive nerve cell damage seen in MS.

“Dr. Akassoglou’s work reveals a novel target for treating MS — which might protect nerve cells and allow early intervention in the disease process,” said Ursula Utz, PhD, MBA, a program director at the National Institutes of Health’s National Institute of Neurological Disorders and Stroke, which provided funding for this research.

“Indeed, targeting the fibrinogen-microglia interactions to halt nerve-cell damage could be a new therapeutic strategy,” said Akassoglou. “At present we are working to develop new approaches that specifically target the damaging effects of fibrinogen in the brain. We also continue to use in vivo imaging techniques to further enhance our understanding of what triggers the initiation and progression of MS. ”