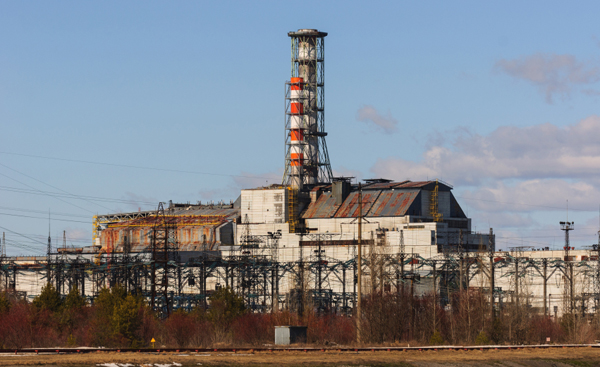 This image of the former Chernobyl nuclear power plant in Ukraine was taken on March 14, 2012. Photo from iStock.com.

A 20-year study following 110,645 workers who helped clean up after the 1986 Chernobyl nuclear power plant accident in the former Soviet territory of Ukraine shows that the workers share a significant increased risk of developing leukemia. The results may help scientists better define cancer risk associated with low doses of radiation from medical diagnostic radiation procedures such as computed tomography scans.

In the journal Environmental Health Perspectives this week, an international team led by scientists at the University of California, San Francisco (UCSF) and the Chernobyl Research Unit at the Radiation Epidemiology Branch of the National Cancer Institute describes the increased risks of leukemia among these workers between 1986 and 2006. The risk included a greater-than-expected number of cases of chronic lymphocytic leukemia, which many experts did not consider to be associated with radiation exposure in the past.

The new work is the largest and longest study to date involving Chernobyl cleanup workers who worked at or near the nuclear complex in the aftermath of the accident.

The following chart compares typical radiation doses for several types of exposures. A millisievert (mSv) is a standard measure of radiation dose.

Overall, there were 137 cases of leukemia among the workers over the 20-year span of the study, and 16 percent of those cancers were attributable to the Chernobyl radiation exposure, the team found.

The findings shed light on the thorny issue of estimating cancer risk from low doses of radiation — an issue of importance to miners, nuclear workers and anyone who is chronically exposed to low levels of radiation at work or patients who receive sizeable radiation doses when undergoing medical diagnostic tests.

“Low doses of radiation are important,” said the lead researcher Lydia Zablotska, MD, PhD, an associate professor of epidemiology and biostatistics at UCSF. “We want to raise awareness of that.”

Worst Nuclear Accident of All Time

The nearly 111,000 Ukrainian workers in the study were among the more than 500,000 former Soviets who worked directly on the front lines in the aftermath of Chernobyl disaster, which was the worst nuclear accident of the 20th century followed by the 2011 Fukushima disaster in Japan.

It began in the early morning hours of April 26, 1986 when a planned test of a backup system for operating cooling pumps went awry. A combination of human error and unsafe reactor design led to the runaway production of heat in Chernobyl’s Reactor No. 4, which quickly caused two massive explosions, ruptured the reactor, crumbled the building, exposed the nuclear core, rained radioactive debris around the compound and spread fallout through the atmosphere over the Soviet Union and Europe.

Many of the Ukrainian workers were exposed to high levels of radiation because they were part of the teams that helped sweep up contaminated debris from the immediate area – much of which was highly radioactive. Some of them, in fact, reached lifetime limits of radiation exposure within a matter of a few hours.

Although an elevated radiation-related risk of leukemia was not surprising, given the level of exposure among many of these workers, what did surprise Zablotska and her colleagues was the elevated risk of chronic lymphocytic leukemia (CLL), which was similar in size to the risk estimated for non-CLL leukemia.

For many years, doctors have known that ionizing radiation from an X-ray source or produced by the decay of radioactive elements can cause leukemia, because it can penetrate the body, expose bone marrow to the radiation and damage DNA. But while scientists have understood this basic mechanism for decades, the question of how much leukemia risk is associated with moderate or low doses of radiation has been hard to answer.

For many years, the best estimates came from long-term studies involving survivors of the 1945 atomic bomb detonations over Hiroshima and Nagasaki, Japan during World War II. People in the immediate vicinity of the blasts were exposed to various levels of radiation, and in the decades afterward, their health was monitored and the increase in cancer tracked.

From those assessments of cancer risk, scientists estimated risks from lower doses by extrapolating the data down. But there have always been problems with this approach, said Zablotska. Atomic bomb survivors were bathed in gamma or neutron rays, while someone who undergoes a CT scan in the U.S. is exposed to X-rays, a different type of radiation. Moreover, extrapolating risks for the Japanese population to Western populations is further confounded by differences in genetics, lifestyle and diet between the two.

The new work helps to bridge this gap because the doses received by the Ukrainian cleanup workers falls somewhere in between the high level received by the Japanese atomic bomb victims and the lower levels received by people who undergo extensive medical scans.

It also challenges the idea that chronic lymphocytic leukemia is not linked to radiation exposure — something that earlier studies of atomic bomb survivors had seemed to support.

In addition to UCSF, authors on this study are associated with the National Research Center for Radiation Medicine in Kyiv, Ukraine; the National Cancer Institute in Bethesda, Md.; Robert Wood Johnson Medical School in Camden, N.J.; Columbia University in New York City; and Burnasyan Federal Medical Biophysical Centre in Moscow.

Additional support was provided by the U.S. Department of Energy (contract HHSN 261 2004 55796C), the Nuclear Regulatory Commission, and the French Institute for Radiological Protection and Nuclear Safety.