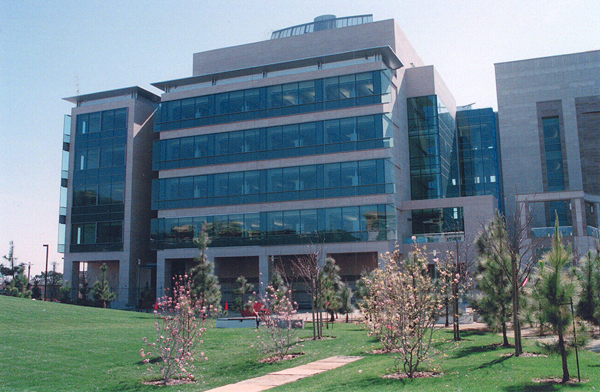 Researchers at the California Institute for Quantitative Biosciences (QB3), headquartered at UCSF Mission Bay, assessed the impact of the institute’s efforts over the past eight years in supporting entrepreneurs on the three UC campuses in which it operates: UCSF, UC Berkeley and UC Santa Cruz.

Universities not only provide the ideal petri dish for cultivating bioscience with commercial potential, but have a moral obligation to do so, given the opportunity to translate public funding into health and jobs, according to a new case study by UCSF researchers.

In an analysis published Wednesday in Science Translational Medicine, researchers at the California Institute for Quantitative Biosciences (QB3) assessed the impact of the institute’s efforts over the past eight years in supporting entrepreneurs on the three UC campuses in which it operates: UCSF, UC Berkeley and UC Santa Cruz.

QB3 Startups By the Numbers

The study found that, by lowering the hurdle even very slightly for scientists to become entrepreneurs, the scientists were able to gain extraordinary traction in translating academic research into public benefit, generating 60 new companies in the first six years and attracting 75 new bioscience entrepreneurs in the last year alone.

“This fundamentally changes the way we think of academic science,” said Douglas Crawford, PhD, assistant director of QB3 and senior author on the paper. “There is a distressing paucity of new drugs in the pipeline and a clear need for new economic engines in this country. This is a call to action to address that.”

The paper cites the following essential support that universities can provide:

At UCSF, this support is happening on multiple fronts, starting with the efforts underway at QB3, which focus on supporting entrepreneurs directly. UCSF also is home to the Clinical and Translational Science Institute (CTSI), among the first of the now 60-member Clinical and Translational Science Award consortium funded by the National Institutes of Health, which has become a model nationwide in creating a vast network of scientists in both clinical and basic research, in an effort to improve collaboration between them and expedite translational research to improve health. UCSF's office of Innovation, Technology and Alliances also is a leader nationwide in forging innovative collaborations with industry, while supporting entrepreneurship on campus.

In the first six years since QB3 started supporting entrepreneurs at the UCSF Mission Bay campus, its growing network of incubators helped launch 60 new bioscience companies at UCSF and across the San Francisco Bay at UC Berkeley — at a cost of $1 million per year. Of those, 56 are still in business, and 13 have moved beyond the incubator network or have been purchased by larger companies.

Together, those companies have created more than 280 jobs and attracted more than $230 million in either small business grants or venture capital funding for those companies, which are primarily focused on developing therapeutics, medical devices and research tools. That’s a 38-fold return on investment, despite current negative trends in seed-stage investing, in addition to the public benefit of any products those companies generate.

The federal government invests $50 billion per year in academic research, including $23 billion for life sciences from the National Institutes of Health (NIH) alone, according to the paper. Both Baltimore, which is home to universities, and the San Francisco Bay Area receive about $2 billion annually in government research and development funding, yet productivity as measured by high-tech startups was 20-fold higher in the San Francisco area than Baltimore, the analysis found.

“This is clearly not an issue of how much funding is coming to the region. It’s an issue of how we think about our social contract,” said Regis B. Kelly, PhD, UCSF professor of biochemistry and biophysics, executive director of QB3 and a co-author on the paper. “Most people would say the public good a university offers is in providing research and education, but if we truly want to support the public with the benefits of science, we need to stop seeing economic growth and new medications as an inadvertent byproduct of academic research.”

Many U.S. universities, including UCSF, are exploring ways to work with the private sector, with the multiple goals of invigorating research on campus, expediting drug development and ultimately improving the therapies that make it to the market.

That’s a relatively new way of thinking, though, and one that often has been met with both skepticism and charges of conflicts of interest by those who believe science should be completely devoid of commercial influences. 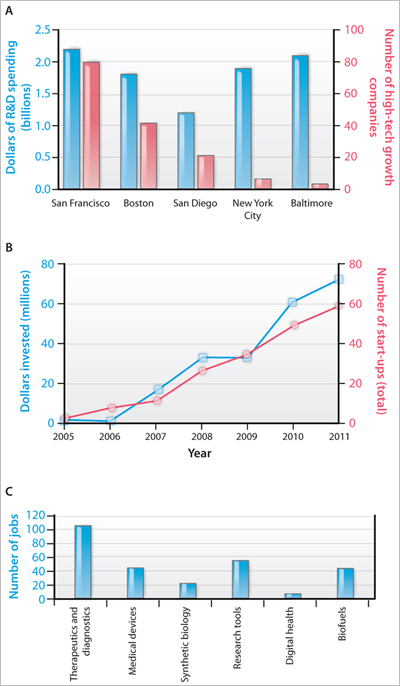 “We have a fundamental charge as scientists to make an economic impact and to translate science into public benefit,” Crawford said. “That’s not a traditional way of thinking of universities, but at a certain point, we need to reassess that traditional thinking and take pride in the fact that a university’s public contributions extends beyond its classrooms.”

The paper points to the mission statement of the NIH, the nation’s largest bioscience funding agency, which specifically includes a goal “to enhance the Nation’s economic well-being and ensure a continued high return on the public investment in research.”

“So as academic scientists, we are actually paid to protect and improve health, to prevent disease, and to enhance economic well-being,” Crawford said. “This is not a sell-out to industry. It’s an obligation to society.”

Among the programs cited in the paper is a year-old mentoring program known as QB3 Startup in a Box, which connects scientists with external legal, professional and business experts to guide them in starting a new company. So far, the program has helped launch more than 75 virtual companies that are currently applying for grants, establishing business plans and pitching to investors. Seventeen are already operational.

Crawford emphasized that the goal of the analysis is not to assess blame, but to find solutions, and there are many. The authors also hope to generate discussion about which solutions work.