More than two weeks after winning the 2012 Nobel Prize for Physiology or Medicine Shinya Yamanaka, MD, PhD, and John Gurdon, PhD, were able to celebrate their monumental achievement together for stem cell discoveries made half a century – and half a world – apart.

During an Oct. 24 press briefing, Yamanaka – president of the ISSCR, a Gladstone senior investigator and a UCSF professor of anatomy – urged his home country of Japan to invest more in science, while Gurdon, of the Gurdon Institute in Cambridge, England, advocated for allowing well-informed patients to assume risks of clinical trials that might benefit them, without a burdensome amount of regulation.

The work for which they won the Nobel Prize, to be awarded in Stockholm in December, began in 1958 – before Yamanaka was born – when Gurdon cloned a normal tadpole by putting the DNA-enveloping nucleus of a skin cell from a frog into a de-nucleated frog egg. The experiment showed that the DNA from a fully mature cell body – called a somatic cell – still contains the genetic information needed to program the orderly development of a complete organism.

This knowledge inspired Yamanaka in his own work decades later. 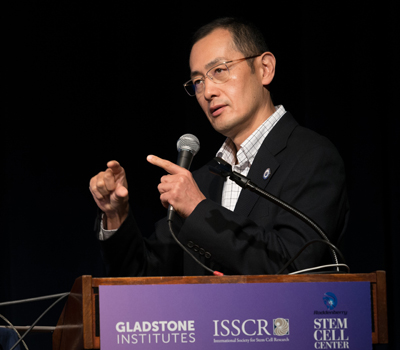 In 2007, Yamanaka showed that the manipulation of just four genes within a cell can induce a specialized skin cell to become a “pluripotent” stem cell – one capable of spinning off virtually any cell type in the body. This achievement was one few thought possible, and it has inspired thousands of scientists and raised hopes for new therapies to replace damaged organs and tissues.

In the long term, the induced pluripotent stem (iPS) cells first developed by Yamanaka may offer some advantages over embryonic stem cells in the study of disease and in the development of novel tissue transplants for damaged organs. Embryonic stem cells still are regarded as the gold standard of pluripotency, Yamanaka said, but iPS researchers are making rapid progress.

“My hope is that one day we can use iPS cells instead of embryonic stem cells,” Yamanaka said at the briefing.

While UCSF and the Gladstone Institutes claim Yamanaka as one of their own, so does Japan, where Nobel Prize laureates are much more rare than in the United States and where Yamanaka therefore stands out even more.

“We have been getting huge support from the Japanese government already,” Yamanaka said. “Japan is a small country. We only have a small amount of natural resources; so we really rely on science for our future. I really hope the government will invest more for sciences, and not just for iPS cells.”

The researchers were asked how they felt about sharing the prize with someone from another generation. Yamanaka, 50, said of Gurdon, 79: “He is an active scientist still, and that is what I really respect.”

Gurdon still conducts hands-on experiments in his own laboratory, while Yamanaka, who not only leads a lab at the Roddenberry Center, but also directs the Center for iPS Cell Research and Application at Kyoto University, spends less time in the lab.

“We have a rather small research group,” Gurdon said, “and it’s convenient to be able to hopefully contribute to what my colleagues are doing with my own hands.”

Referring to Yamanaka, Gurdon said, “If it wasn’t for his work, I think we would have long since disappeared into obscurity.”

But Gurdon also said knowledge gained through continued studies of cloning, a kind of natural reprogramming, might be applicable in efforts to improve techniques for reliably making stem cells and reprogramming them, a prerequisite for scaling up protocols for practical application in medicine.

“When the sperm enters an egg, it has to undergo reprogramming quite substantially,” he said. “It’s one of the most specialized cells. … And yet, with 100 percent efficiency, the sperm is reprogrammed. … It’s well worth discovering how nature manages this process in normal life with natural components.”

“My own view is that if we could actually work out how an egg reprograms a somatic nucleus — if we knew which molecules actually are involved and how they do it — then that would surely be very useful eventually for making the iPS route, and others, more effective,” Gurdon said.

When asked about balancing risks and benefits of new stem cell therapies in clinical trials, Gurdon said that if risks are communicated clearly, then patients with life-threatening diseases should be allowed to participate in clinical trials.

"My impression is that too much emphasis may be placed on regulation and ensuring absolute, 100 percent safety,” Gurdon said. “I am strong believer in the individual having a choice. … Surely someone can decide for themselves whether they want to take any risk that might exist."

In the clinical realm, some applications for iPS cells are nearer on the horizon than others, depending on potential risks and benefits, according to Yamanaka.

In fact, for macular degeneration, the first clinical trial using reprogrammed cells developed from iPS cells is expected to begin next year, in Japan.

The day after the press briefing, symposium speaker Masayo Takahashi, MD, PhD, from the RIKEN Center for Developmental Biology in Kobe, Japan, described a planned clinical study aimed at replacing cells from the retina that are lost in macular degeneration, a common cause of blindness among older adults. 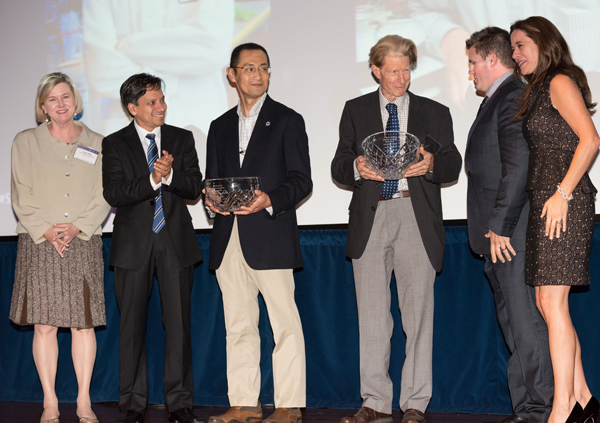 Shinya Yamanaka, third from left, and John Gurdon, third from right, receive crystal bowls from the Gladstone Institutes, ISSCR and the Roddenberry Stem Cell Center at Gladstone in honor of their Nobel Prize in Physiology or Medicine, announced earlier this month.