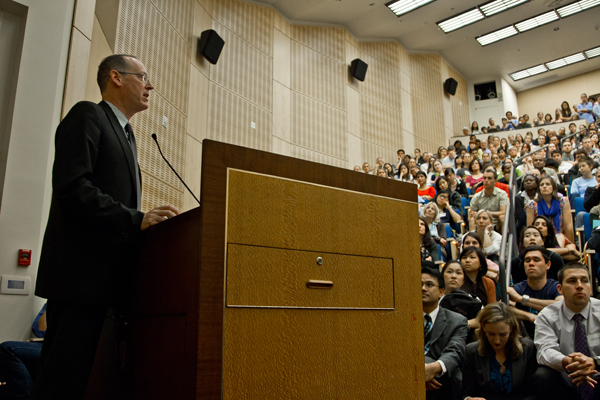 Paul Farmer, MD, PhD, discussed the global health work of his nonprofit organization, Partners In Health, in a special lecture to a packed Cole Hall on Oct. 17.

“Be careful because this is really complex. You’ll want to take notes,” Farmer joked, as he showed a slide to the hundreds packed into Cole Hall on Oct. 17 to hear about his experiences as founding director of Partners in Health (PIH), a nonprofit organization dedicated to providing health care to underserved communities around the world. The slide simply had three boxes describing the platform of care to keep any individual healthy: Community-Based, Health Center-Enriched and Hospital-Linked.

“The quality of care that we can deliver with this system that goes from community to clinic to hospital, when necessary, can provide better rates of retention, better outcomes than any other model in the world,” said Farmer, a medical anthropologist and physician. “And it’s not because of some secret PIH sauce. It’s because we have community health workers. That’s the cornerstone of this.”

The message resonated with the UCSF audience – which filled seats, aisle floors and standing room in the back – inspired by Farmer’s stories from Haiti and Rwanda, where PIH has dramatically improved survival rates for people with HIV and AIDS.

UCSF has a long history of tackling critical global health issues, including serving at the forefront of research and care in the HIV/AIDS epidemic. Roughly 1,200 faculty, staff and students at UCSF currently are engaged in global health activities, which reach almost every country in the world.

In response to that engagement and student interest, UCSF created the nation’s first master’s program in global health sciences. Now in its fifth year, the program currently has 38 students, with the program expected to double its student body in the coming years, adding PhD, certificate and online programs. 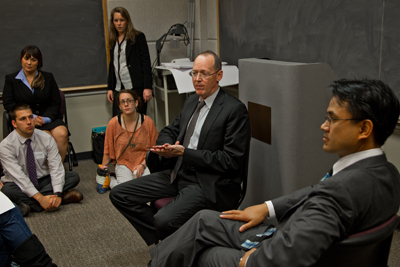 “We wanted Paul to share with the UCSF community the incredible possibilities when academic medical centers partner with NGOs and governments for global health delivery,” said Phuoc Le, MD, MPH, an assistant clinical professor of Internal Medicine and Pediatrics, who invited Farmer, one of his mentors, to speak at UCSF. Mandhavi Dandu, MD, MPH, assistant clinical professor of medicine and associate director of the Pathways to Discovery Program in Global Health, also helped organize Farmer's visit, which included smaller discussions with global health students.

“We believe that the right ingredients are also here for UCSF to become a significant change agent to address service delivery in the most vulnerable communities,” Le said. “We hope that Paul's visit will galvanize the critical mass of talent that is already here at UCSF.”

Farmer, who’s Kolokotrones University Professor and chair of the Department of Global Health and Social Medicine at Harvard Medical School as well as chief of the Division of Global Health Equity at Brigham and Women’s Hospital in Boston, said he was first drawn to his global health mission while working at a squatter’s settlement in Cange, Haiti, in 1983. As a 23-year-old, he faced a dire health situation in which the rural community didn’t have adequate access to food, clean water, electricity and arable land.

“It was a good object lesson on how to think critically about the financing of health care services,” he said.

Committed to finding a solution, Farmer – commuting between Haiti and Harvard, where he was accepted into medical school – worked to build Clinique Bon Saveur, a two-room community clinic in Cange. His experience there eventually led to the founding of PIH in 1987 to help tackle the growing AIDS problem in that country.

Developing a community-based model of care, PIH launched in Haiti the world’s first program providing free, comprehensive HIV treatment in an impoverished setting in 1998 and has since treated more than 6,000 HIV patients. Key to the program are its thousands of accompagnateurs, or community health workers, who check on patients at home and make sure they’re taking their antiretroviral therapy drugs regularly and correctly.

Despite the simplicity of this model, it’s very hard to build, Farmer noted.

“Why is it hard to build?” he asked. “It’s not because you have to have the latest and greatest infection control technologies, though those are important and we can put them in. It’s not because it’s so complicated a model that it takes years to study. It’s because it’s for poor people.”

In other words, a colleague once joked to him, “Your payer mix isn’t good.”

The challenge in global health, Farmer said, is to combat perceptions that health problems such as HIV and tuberculosis are insurmountable and to build systems that can deliver affordable, commonsense care to poor populations.

“Everywhere you go, you will find poor people living with complex illnesses who are deemed untreatable and health problems that are deemed intractable. And we’ve got to fight that. That’s what you’re supposed to be thinking about in a place like this,” he told the UCSF audience.

Farmer cited a case study in the slums of Lima, Peru, where PIH worked to combat drug-resistant tuberculosis using individualized therapy through a community-based model of care.  In less than three years of work there, cure rates for multi-drug -resistant-TB patients was at 83 percent by 1999.

In 2005, the government of Rwanda, with the support of the Clinton Foundation, invited PIH to implement its rural health care model for HIV there. PIH rebuilt the local infrastructure, including building new hospitals and establishing health centers, and introduced low-cost antiretroviral therapy to patients through community health workers. In a case study of 1,041 patients, 92.3 percent were retained in care, 5 percent died and 2.7 percent were lost in follow-up care or defaulted, Farmer noted.

Today more than 90,000 Rwandans are on antiretroviral therapy, and it’s the only country in Sub-Saharan Africa, besides Botswana, that can claim universal access to health care for people with AIDS.  “To think that happened in one decade is stunning and gratifying,” he said.

The overwhelming turnout for Farmer’s UCSF appearance was not unusual for the popular lecturer, whose tireless work has earned him the role of United Nations’ Deputy Envoy to Haiti, under Special Envoy former President Bill Clinton, in 2009, as well as several humanitarian awards.

Farmer “has been able to inspire and shepherd a generation of students eager to address health disparities,” said Le, who recently returned from a trip to rural Haiti where he worked at a PIH-supported clinic. “He's also been remarkably clear that we need to view our work not as charity, but rather through a human rights framework, which is much more compelling and sustainable.” 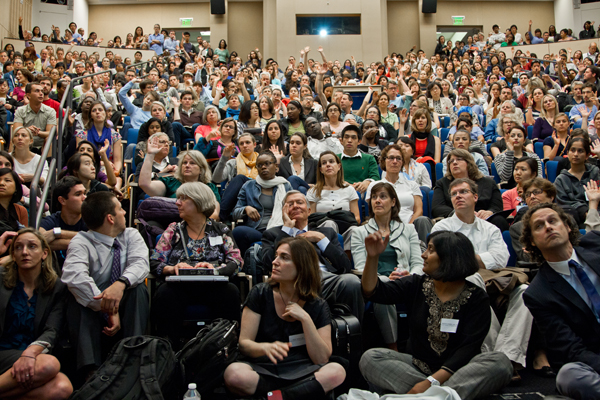 The standing-room-only audience in Cole Hall participates in a question-and-answer session with Paul Farmer after his special lecture on Oct. 17.