The stem cell discovery by Shinya Yamanaka, MD, PhD, that won the Nobel Prize in Medicine not only has transformed the research landscape, but also could have a significant impact on patients within the decade, colleagues at the Gladstone Institutes and UCSF say.

Gladstone and UCSF leaders celebrated Monday’s news of the Nobel Prize for Yamanaka, a senior investigator at the UCSF-affiliated Gladstone Institutes and a UCSF professor of anatomy, who discovered a way to reprogram ordinary human skin cells into stem cells that can be used to better understand and treat a number of human diseases. His discovery came nearly 50 years after John Gurdon, PhD, of the Gurdon Institute in Cambridge, England – with whom Yamanaka shares the Nobel Prize – showed in frogs that the genetic program of a mature cell could be “reset” to its embryonic state.

“Shinya’s remarkable story being acknowledged today is not the end, but really the beginning,” R. Sanders Williams, MD, president of Gladstone, said at a morning news conference. “The work that Shinya has done is transformative to what we at Gladstone do and scientists all over the world have picked up his principles and technologies to advance work toward clinical application.”

For example, Allan Basbaum, PhD, chair of the UCSF Department of Anatomy, is working with colleagues on a strategy for modifying stem cells to treat pain and essentially rebuild damaged nervous systems – something he did not envision doing even just a few years ago. Earlier this year, they successfully transplanted immature embryonic nerve cells into mice and saw that they eventually matured into functioning neurons.

“What’s exciting to me is to be taking part in the possibilities for taking advantage of what he has done," Basbaum said. "This is not pie in the sky; I can foresee clinical trials in the foreseeable future.” 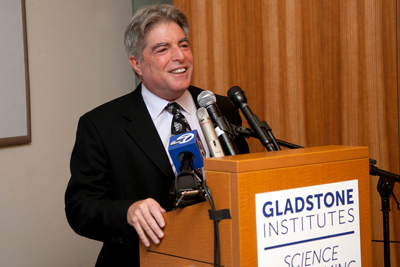 Yamanaka, speaking via teleconference from Japan, reflected on the training environment that enabled him to make the 2006 discovery that has since led to a variety of methods for reprogramming adult cells into stem cells that can become virtually any cell type — such as a beating heart cell or a neuron that can transmit chemical signals in the brain.

“The amount of support and friendship I received from Gladstone has been enormous. I cannot thank you enough,” Yamanaka said from Kyoto, where he’s director of the Center for iPS Cell Research and Application (CiRA) and a principal investigator at the Institute for Integrated Cell-Material Sciences (iCeMS), both at Kyoto University.

Yamanaka, who started his career as an orthopaedic surgeon but acknowledged that he wasn't talented in surgery, embarked on an unlikely journey to his Nobel Prize-winning discovery in the early 1990s when he applied to 50 different research organizations to train as a scientist in the United States. 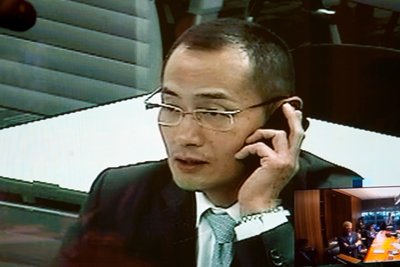 Shinya Yamanaka speaks to colleagues and reporters via video conference from Japan after he won the 2012 Nobel Prize in Medicine.

The only one to return his call was Thomas Innerarity, PhD, a former senior investigator at the Gladstone. “I was very grateful to him for his braveness to hire me,” Yamanaka said Monday.

Yamanaka arrived at Gladstone in 1993 to train in Innerarity’s lab, where he undertook a difficult project to lower blood cholesterol, according to Robert Mahley, MD, PhD, president emeritus and founder of Gladstone.

“The project he undertook was a complete failure,” Mahley said, noting that the experimental mice ended up with liver cancer instead of lower cholesterol. “Undaunted, he wanted to know why the cells proliferated as they did, and one of the ways to get to answer was to study embryonic stem cells. … So he learned how to do stem cell biology. The rest is history.”

After completing his training, Yamanaka would start his own lab in Japan before later returning to Gladstone as a senior investigator.

Deepak Srivastava, MD, who leads stem cell and cardiovascular research at Gladstone, said he was especially proud of the institute’s role in training Yamanaka.

“It’s Gladstone and UCSF’s mission to not only do the greatest science in the world, but also to train the greatest scientists of the next generation. And this is a shining example of that approach,” said Srivastava, a UCSF professor in the departments of pediatrics and biochemistry and biophysics. 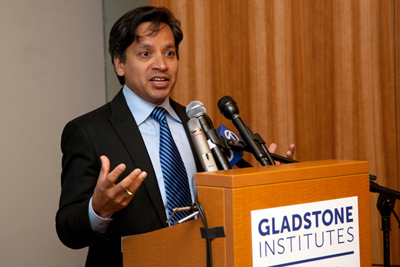 Sam Hawgood, MBBS, dean of the UCSF School of Medicine and vice chancellor of medical affairs, echoed that sentiment, calling Yamanaka’s award “a high water mark of the wonderful relationship between the University of California, San Francisco, and the Gladstone Institutes that we have enjoyed now for several decades. This affiliation helps us attract the best and brightest minds  to the Bay Area, to San Francisco, to work on the hardest problems in human biology.”

In announcing the award, the Nobel Committee cited Yamanaka and Gurdon “for the discovery that mature cells can become pluripotent.”

Pluripotency refers to the capacity of a cell to become nearly any type of cell in the body. Embryonic stem cells were known to have this characteristic, but scientists previously thought mature cells were incapable of this.

Yamanaka, however, developed a way to make these mature cells more similar to embryonic stem cells. He accomplished this — first with mouse cells and later with human cells — by adding just four genes, calling them induced pluripotent stem cells, or iPS cells.

Despite the promise iPS cells have shown in the test tube and in lab experiments with mice, they still face a number of technological and regulatory hurdles before they will become readily available to treat human diseases. Even so, Yamanaka's discovery has profoundly impacted the understanding of genetic disorders and other diseases by giving scientists new ways to study these conditions in the lab and new tools for testing the potency of drug combinations against them.

In taking mature, specialized cells back to a state of near-infinite potential, “Shinya Yamanaka has shown us that development is not a one-way street,” said Arnold Kriegstein, MD, PhD, director of UCSF Eli and Edythe Broad Center of Regeneration Medicine and Stem Cell Research. “What he has achieved in basic biology has real potential to be used in treating currently untreatable diseases.”

Bruce Miller, MD, a UCSF neurology professor and director of the UCSF Memory and Aging Center, sees applications for neurological conditions. "The ability to bring cells back to their more pluripotent state has generated an industry of investigators who are exploring the potential of this approach for therapies for neurological conditions, while simultaneously using this technology to develop new model systems from the peripheral cells of patients. This discovery represented one of the few remaining holy grails in science, and it will change our field forever."

Alan Trounson, PhD, president of the California Institute for Regenerative Medicine, said Yamanaka is responsible for one of only a "few moments in science that are undisputed as genuine elegant creativity and simplicity."

“The induced pluripotent stem cells he created will allow us to interrogate and understand the full extent and variation of human disease, will enable us to develop new medicines and will forever change the way science and medicine will be conducted for the benefit of mankind,” Trounson said. “An extraordinary accomplishment by a genuinely modest and brilliant scientist. He absolutely deserves a Nobel award."