The lone scientist working late into the night to complete a breakthrough experiment that leads to a Eureka moment of solitary joy is a stock scene from Hollywood movies, but in reality science is a highly social endeavor.

So when Shinya Yamanaka, MD, PhD, won the Nobel Prize for Physiology or Medicine, colleagues at UCSF and the Gladstone Institutes and scientists from his lab gathered Monday afternoon to cheer the laureate and raise champagne toasts, while the man being feted shared in the celebration via live video streaming from halfway across the globe. 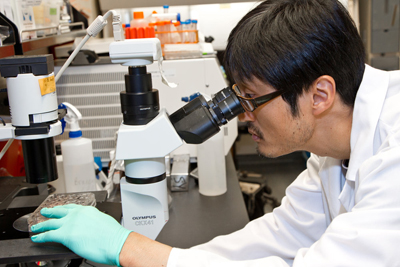 Gladstone research scientist Kiichiro Tomoda, PhD, works in the Yamanaka Lab on the day his boss was awarded the Nobel Prize for Physiology or Medicine.

Yamanaka, a UCSF professor of anatomy and a Gladstone senior investigator, is receiving the Nobel Prize for his discovery of an elegant way to reprogram mature skin cells so that they become stem cells. These induced pluripotent stem (iPS) cells, now are under study in thousands of laboratories, and it is expected that their use will grow in disease research, pre-clinical drug testing and in clinical studies that aim to regenerate damaged tissues.

At press briefings, Yamanaka was quick to credit his colleagues and former colleagues in the United States and Japan, as well as the scientists who blazed a trail before him, including John B. Gurdon of the Gurdon Institute in Cambridge, England, with whom he will share the prize.

In fact, Yamanaka might have failed in his quest to become a game-changing scientist if the UCSF-affiliated Gladstone Institutes had not given him a chance two decades ago. Before he became a scientist, he was an orthopaedic surgeon.

Yamanaka had applied for fellowships at 50 institutions, according to Robert Mahley, MD, PhD, president emeritus and founder of Gladstone. Only Gladstone accepted him — specifically one of the founding Gladstone scientists, Thomas Innerarity, PhD.

“I think that I am very lucky that I was able to join Gladstone 20 years ago. The amount of support I received from Gladstone has been enormous,” Yamanaka said. 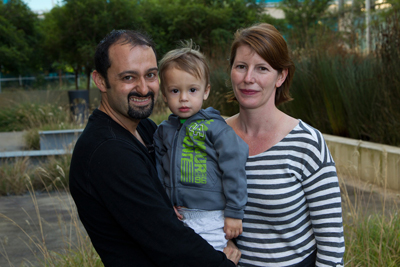 Gladstone scientists Nathan Salomonis, PhD, a postdoctoral fellow in Bioinformatics Core Services, and biologist Heather Myers-Salomonis, a research associate, stand with their son William, 11 months, at the celebration for Shinya Yamanaka's award of Nobel Prize in Medicine on Monday.

Yamanaka — now a globe-trotting scientist with labs both at Gladstone and at Kyoto University, where he is director of the Center for iPS Cell Research and Application — is recognized as an exceptional individual by his Gladstone colleagues and fellow UCSF faculty members, as much for his personal qualities as for his sheer intellect. He is widely regarded as kind, generous, funny, curious — as well as fiercely persistent and determined. He helps others, and has been helped in turn.

When Yamanaka first came to Gladstone as a postdoctoral fellow, Mahley became a father figure to the then-untrained researcher, who lost his own father at age 17, according to Deepak Srivastava, MD, director of the Gladstone Institute of Cardiovascular Disease, who later recruited Yamanaka to return to the Gladstone as an investigator in 2007.

Yamanaka started his postdoctoral career in 1993 with the goal of identifying pharmaceutical candidates that could lower cholesterol to fight heart disease. He failed to lower cholesterol in mice; instead he managed to give them liver cancer. 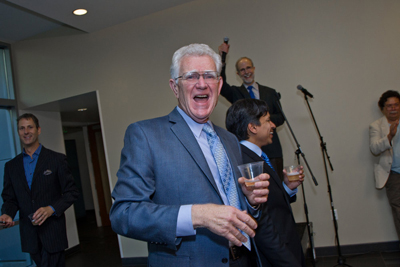 That failure is what drove him to learn about stem cells, to understand why the mice got liver cancer. Gladstone had recently established infrastructure and made a commitment to direct more resources toward stem cell research. Eventually, Yamanaka became interested in stem cells as a model system, not merely as a tool.

Mahley said Yamanaka still refers to former Gladstone lab technician Heather Myers-Salomonis, RN, who introduced him to stem cells, as his “professor.” Myers-Salomonis, an expert in growing embryonic stem cell lines, was responsible for helping postdoctoral fellows from Gladstone labs. Many of them did little more than hand over their engineered DNA and had her do the rest.

“Learning how to do mouse embryonic stem cell culturing involves learning a whole system, and the experiments take a couple of months,” Myers-Salomonis said. “Some people don’t want to dig in and learn that skill set. Shinya wanted to get in on the real nitty gritty, and he really learned it well.”

In the open layouts of modern scientific laboratory buildings, each principal scientific investigator works with several postdoctoral fellows, graduate students and technicians, and a visitor can’t tell where one lab ends and another begins. Scientific ideas and camaraderie are nurtured in the interactive environment. 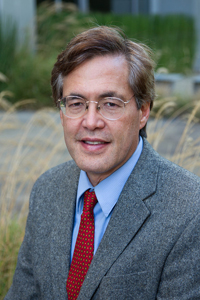 Today researchers and technicians from the laboratories of Yamanaka and Srivastava, along with those from the lab of Benoit G. Bruneau, PhD, and Sheng Ding, PhD, and Bruce Conklin, MD, routinely interact in the space they share on the fourth floor of the Gladstone building at Mission Bay. Because Yamanaka spends more time in Kyoto than in San Francisco, Conklin and Srivastava help mentor Yamanaka’s postdoctoral fellows.

Conklin, who now uses iPS cells to learn more about genetic causes of heart arrhythmias, started at Gladstone as a UCSF postdoctoral fellow at the same time as Yamanaka. Some of the cell lines that Conklin and other researchers were working on were used by Yamanaka to identify the key factors in converting skin cells to stem cells. And in turn, the impact of Yamanaka’s discovery on his own work was immense, Conklin said.

“Instead of working with embryonic stem cells and transgenic and knockout mice, we now work with human induced pluripotent stem cells as model systems,” he said.

“The discovery that Shinya made has inspired us to go in scientific directions we probably would not have otherwise,” said Bruneau, who works with stem cells to better understand a rare heart disease that causes holes to form in the heart. “We never would have considered trying to model human congenital heart disease in a dish — it just wasn’t possible. Now we can do it, and we’re doing it and starting to get results.”

“Our work reprogramming fibroblasts directly to cardiomyocytes was inspired by the approach Shinya took in reprogramming fibroblasts to iPS cells,” Srivastava said. In the same way that Yamanaka originally homed in on just four genes that are key to converting an adult stem cell to an iPS cell, Srivastava’s lab team homed in on the genes that are essential for cardiomyocytes.

Ding, who is doing groundbreaking research using small molecules instead of proteins to manipulate stem cells, came to UCSF and Gladstone a year ago, but long before that, Yamanaka invited him to Japan and showed him around. He said he was attracted to the UCSF Mission Bay campus because “people here are very collegial, and very generous with their time and ideas.”

“Shinya’s impact for me is his approach to scientific questions, and also his personality,” Ding said. “He is very focused, and because of his persistence and focus, he made this breakthrough discovery. He’s also a very nice guy.”

At the Monday afternoon reception, Mahley quoted Albert Einstein, who said it is character and not intellect that makes a great scientist. “That’s what Shinya Yamanaka has — integrity and humility,” Mahley said.

That humility was evident when Srivastava was awakened early Monday morning by a call from Yamanaka. Before giving Srivastava the good news, Yamanaka apologized for waking him at such an early hour.

“I can think of no one who I would rather have this honor and to represent the best of the scientific community to the world,” said R. Sanders Williams, MD, president of Gladstone. “He’s the real deal in every way.”