UCSF and its affiliates have been successful in the transformation of San Francisco as a leading center of innovation in health care and biosciences, according to a new report released Wednesday.

The combined economic impact of hospitals, biomedical research and health sciences education generates $16.7 billion and more than 100,000 jobs per year — almost one in five jobs in the City and County of San Francisco, according to the report by economist Philip King, PhD, an assistant professor at San Francisco State University.

“The San Francisco Bay Area is known as a center of innovation,” King says. “Less reported is the role of health and medical technology on the Bay Area’s economy, in particular, San Francisco’s economy. Much attention has been focused on social media companies like Twitter and Zynga. But another significant revolution is under way in San Francisco — in biomedical research and technology.”

King emphasized these points in a report released Wednesday at ForecastSF, the region’s leading economic and jobs summit presented by the San Francisco Chamber of Commerce, Wells Fargo and the San Francisco Center for Economic Development.

The report, commissioned by the Hospital Council of Northern and Central California, the Chamber of Commerce, UCSF and others, follows up on last year’s analysis of hospitals and expands the focus to examine San Francisco’s role as a leading center in health care, education and bioscience research.

San Francisco Mayor Ed Lee referred to the economic power of the life sciences sector as the “silent giant,” when compared to the much-touted high-tech sector. Lee said that he will meet quarterly with the Hospital Council to ensure that the city drives economic growth and supports innovation in health care and research discovery aimed at solving diseases such as cancer and Alzheimer’s.

UCSF Chancellor Susan Desmond-Hellmann, MD, MPH, described what she calls the secret sauce of innovation in San Francisco in a video that premiered at the ForecastSF summit. "It's complicated," she said, "but there are some important elements: a strong commitment to world-class care for all of our residents; 14 hospitals dedicated to improving the health of our community; 108 bioscience companies which either started here or decided to relocate here; and very importantly, we have great universities, colleges and research institutes that are conducting groundbreaking research, and training the next generation of scientists, health care professionals and technicians."

The summit, held at the InterContinental Mark Hopkins Hotel, highlighted other aspects of the city’s economic landscape, including the benefits of having the San Francisco Giants, which has welcomed more than 40 million people to AT&T Park; the flourishing tourism industry which this weeks brings Fleet Week and the America's Cup World Series to the city; and the role of arts, food and small businesses that add to the unique culture and quality of life in San Francisco. 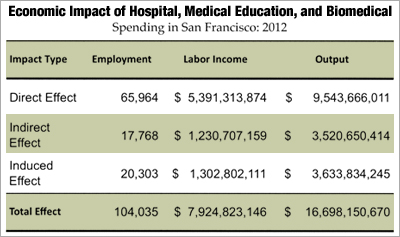 John Silvia, managing director and chief economist at Wells Fargo, presented an overview of San Francisco’s economic picture, which is rosier when compared to the state of California and the nation. He cited San Francisco’s strengths, such as its high per capita income, job growth, high hotel occupancy rates, college-educated population and low home foreclosure rates.

As the second-largest employer in San Francisco, UCSF is a catalyst of the health sciences sector's economic strength, especially at Mission Bay, a thriving community that just a decade ago was a bleak area consisting of abandoned railyards and dilapidated warehouses.

Mission Bay is home to other prominent research institutes, such as the UCSF-affiliated J. David Gladstone Institutes, an independent and nonprofit biomedical research institute; the California Institute for Quantitative Biosciences, or QB3, a cooperative venture between UCSF, UC Berkeley and UC Santa Cruz; and the California Institute for Regenerative Medicine, a taxpayer-funded grant-making agency dedicated to advancing stem cell research.

Obstacles to Operating in San Francisco

However, challenges remain for the city, several speakers acknowledged. King noted in his report that California has cut back on educational spending across its three higher education systems, including the University of California, and has curtailed redevelopment funds, which have been a source for revitalizing depressed areas within cities, such as Mission Bay. And the city faces fierce competition for business from other metropolitan areas. 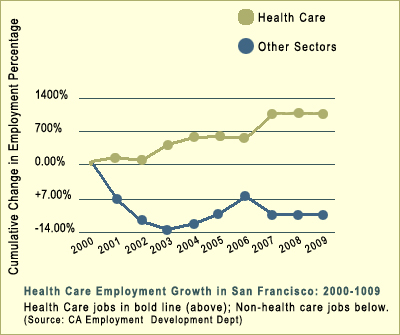 In a survey of biomedical firms in San Francisco conducted as part of the study, the main factors that the respondents considered as obstacles to operating in the city are high rent and real estate prices, local red tape and regulations, and availability of suitable lab and workspace.

While QB3 and most recently Bayer HealthCare offer affordable incubator spaces for start-ups, once the firms grow, many move to other places in the Bay Area, such as South San Francisco, Redwood City and Emeryville where the cost of living is cheaper.

Silvia also cited the city’s high cost of living, which may escalate in the coming years leading to what he called "classic urbanization," in which the middle class is priced out of the housing market.

Other biotech firms cited the availability of a skilled, educated and experienced labor force as an obstacle for doing business in San Francisco.

“As the State of California has reduced its role in education, we should make sure that it continues to provide for the education and training of health and biomedical workers at all levels, from nursing to lab technicians to state-of-the-art medical education,” King reports. “In short, San Francisco’s health and biomedical sector generate jobs and income for the City, while also ensuring that its residents get the best quality health care available.”