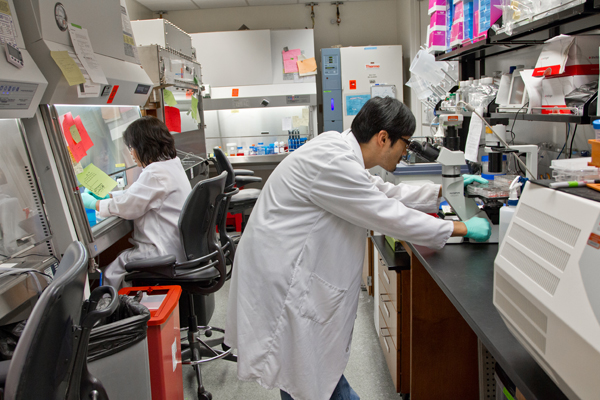 Mariselle Lancero, a research associate II, and research scientist Kiichiro Tomoda, PhD, work in the Yamanaka Lab at the Gladstone Institutes on the day Shinya Yamanaka won the Nobel Prize for Physiology or Medicine.

Stem cell researcher Shinya Yamanaka, MD, PhD, reached in Kyoto shortly after being named winner of the 2012 Nobel Prize for Physiology or Medicine, said he was doing some housecleaning when the call came in, and was “very surprised.”

But at UCSF, where Yamanaka joined the faculty in 2007, splitting his time between Kyoto University and the UCSF-affiliated Gladstone Institutes, his winning the Nobel Prize was considered virtually inevitable. The only surprise, colleagues say, was that the honor came so quickly.

Often the Nobel Committee waits decades before awarding the prize to make sure the discovery stands the test of time. It’s rare for a scientist’s influence on scientific thought and experimentation to spread as fast as it did in this case.

Yamanaka discovered keys to the developmental destiny of cells, and how these keys can be used to manipulate cell fate in ways that offer hope to scientists who seek new methods of providing tissues for organ transplantation and for other medical applications. His seminal paper was published in 2006, and there is an expectation that the techniques he developed will lead to clinical trials for macular degeneration as early as next year.

“I’m a little surprised it happened this year,” Srivastava said. “I thought it would happen in the next five to 10 years.”

Even without considering the clinical potential, the implications of Yamanaka’s work for understanding basic biology are deserving of recognition, Srivastava said.

“The award is carefully worded,” he noted. “The fundamental, basic discovery that we can alter cell fates is really what this prize is about; it’s not so much about stem cells, or even about regenerative medicine. It’s about the discovery that we can control the fate of the cell by manipulating DNA without changing the genetic code.

“The ability to control cell fate, we hope, will allow us in the future to use the technology for regenerative medicine and disease modeling to drive discovery,” he said.

Srivastava — who himself is using strategies that stem from Yamanaka’s earlier discoveries to develop heart muscle from adult cells — is indeed optimistic about the medical possibilities. At a press briefing on Monday, he said he expected that Yamanaka’s conceptual advance within a couple of years will lead researchers to be able to convert a skin cell into virtually any other type of cell in the body. He forecast that in the next five to 10 years, the technology developed by Yamanaka will be leveraged in efforts to understand and better treat many human diseases.

Allan Basbaum, PhD, chair of the UCSF Department of Anatomy, where Yamanaka is a professor, said he also was surprised that Yamanaka won so quickly. However, Basbaum said, “he revolutionized a scientific field,” and to be named a Nobel laureate “that’s the way it should be.”

Cody Kime, a research associate II, works in the Yamanaka Lab, on the day Shinya Yamanaka was awarded the Nobel Prize for his stem cell research.

Yamanaka greatly advanced the field of stem cell research by developing a way to turn back the development of adult skin cells, making them more similar to embryonic stem cells in their potential to become any type of cell that populates tissues throughout the body.

These induced pluripotent stem cells, or iPS cells, hold great promise for research. Pluripotency refers to the capacity of a cell to become nearly any type of cell in the body — a characteristic of the fertilized egg and of embryonic stem cells, but not one It was thought possible to coax from already mature cells.

Unlike embryonic stem cells, iPS cells can be developed using cells from adults who already have a disease. Already iPS cells are being reprogrammed in the lab to learn more about the development of human diseases, using human cells rather than animal cells and animal disease models.

In the development of cell therapies to regenerate tissue, iPS cells can be derived from the patient’s own tissue, allowing treatment to be better tailored to the individual patient.

The experiments that eventually succeeded for Yamanaka were simple and easily reproducible, which led to the methods he developed to be quickly adopted and built upon. Before Yamanaka, the ranks of those who sought to manipulate cell fate without changing the genetic code was smaller, and the field advanced more slowly.

Yamanaka said he was very inspired to pursue what others said was impossible in part by the work a half-century earlier by the scientist with whom he shares the Nobel Prize – John Gurdon, PhD, professor of cell biology at Cambridge University's Magdalene College and founder of the Gurdon Institute in Cambridge, England.

Development had always been viewed as a one-way street. As organisms develop, cells become increasingly specialized. That’s why it was a surprise when Gurdon in the 1950s showed that transferring the nucleus of an adult cell – complete with DNA and the encoded genetic program – into an egg could generate embryonic cells. He showed that the genetic program of an adult cell could be “reset” to its embryonic state. Gurdon first accomplished this working with frogs. This line of inquiry eventually led to the cloning of Dolly the Sheep in 1997.

Asked what he is working on now, Yamanaka said: “We have many projects, but I would say the most important project for us is to establish iPS cell stocks, or a bank.” In addition Yamanaka said, the Center for iPS Cell Research and Application in Kyoto where he works has a good manufacturing practice (GMP) facility. “We are hoping to establish the very first GMP-grade clinical cell lines by next year,” he said.

Despite the advances to date, Yamanaka said there are many details that must be learned about the biological mechanisms that guide the reprogramming of cells.

“We are doing our best, but there are still many unknowns,” he said. “It’s still right now a black box.”