Being a first-generation college student can be an isolating experience, but this "invisible community" is bigger than you think at UCSF. Some of UCSF's leaders and scholars reflect on their pioneering academic journeys and offer some advice on how to thrive at this world-class institution.

When Tania Pacheco first arrived at UCSF, she was struck by the feeling that she had more in common with the campus restaurant workers and janitors than many of her fellow doctoral students.

A Mexican immigrant whose parents didn’t make it past high school, Pacheco was used to being an academic trailblazer in her family as a first-generation undergraduate student at California State University, Fresno. But that experience didn’t quite prepare her for the professional and social expectations of the graduate-level academic world. 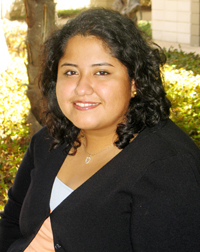 “It was a complete culture shock to go from a place like Fresno State to UCSF,” said Pacheco, who’s pursuing her doctorate in medical sociology. “I realized right away that the demographics were vastly different than in my undergraduate studies – both race and class.”

Students like Pacheco inspired the creation of a support program at UCSF that helps first-generation college students connect with each other as well as mentors who’ve been through similar experiences. It started in 2008 with a small, monthly discussion group and has evolved into the First Generation College Student Initiative, part of Student Academic Affairs’ efforts under UCSF’s strategic plan to attract and support the most talented and diverse trainees in the health sciences.

“Financial, educational, emotional and professional support are crucial to the success of any student – but these are not a given for first-generation college students who are pioneers in the journey through higher education,” says Neesha Patel, PhD, who started the program as a staff psychologist for Student Health Services. This year, Patel was appointed director of the newly formed initiative, which will expand services and resources for first-generation students.

A Model for Graduate Schools

Nearly 30 percent of incoming freshmen in the US are the first generation in their families to attend college, according to a 2005 report by the National Center for Educational Statistics, the most recent data available that suggests the percentage could be even higher today.

Show Your School Spirit and Win an iPad2

While undergraduate schools offer an array of federally funded support programs to help this demographic, there are few resources at the graduate level, making UCSF’s initiative unique.

Patel argues that those resources are needed more than ever in graduate and medical schools, where first-generation college students find themselves even more in the minority.

Pacheco says something clicked for her when she attended the first discussion group during her second year at UCSF.

“It was this affirmation that something was needed, that there was a particular group of people like me that needed to encourage each other beyond just race and ethnicity, that there was really something about being a first-generation student that was different,” she said, noting that many of her friends who pursued graduate degrees at other schools ended up dropping out partly because of the lack of a support system.

A common theme in discussions among first-generation college students is the “imposter syndrome,” a feeling of inadequacy amid the high expectations for competency at a top-flight school like UCSF. Many come from low-income or working-class families who can’t provide any guidance for this new frontier.

“Sometimes there’s pride about being first-generation, sometimes there’s worry,” she said. “There can be this fear of being somebody who doesn’t know, instead of a confidence that it’s OK to not know and that you belong.”

One of Patel’s main challenges when starting the support program was identifying the first-generation college students on campus – and the mentors who could best help them.

She was surprised by the overwhelming response as people from this “invisible community” came out of the woodwork, eager to participate. More than 100 UCSF leaders, faculty and postdocs who were the first generation to attend college answered an initial call to gather and brainstorm ways to reach out to students.

“I don’t think we would have the kind the support programs that we have today, or that we’re going to have, if leaders weren’t committed to supporting issues of diversity at UCSF, and if we didn’t have faculty and staff who weren’t really generous in their support of students and this community,” Patel said.

Mark Ansel, PhD, an assistant professor in the Department of Microbiology and Immunology, was one of the first to sign onto Patel’s list.

Raised by working-class parents in a Pennsylvania farming community, Ansel struggled at times to relate with his family about his academic pursuits. “They’re excited that you’re doing so well, but they want to know when you’re going to get a job,” he recalled.

He found professors during his undergraduate years who helped propel him through his academic career and was inspired to offer that help to UCSF students who reminded him of himself.

“When I’ve made it through something like this with mentors who’ve helped me along, I want to acknowledge those mentors but I also want to reach out and give a hand to the people behind me,” said Ansel, who’s participated in faculty panel discussions and one-on-one mentoring sessions.

Another early fan of Patel’s program was Joseph Castro, PhD, vice chancellor of Student Academic Affairs, himself a first-generation college student. Raised by a single mother who came from a long line of farm workers in Mexico, the San Joaquin Valley native described his own first-generation experience as sometimes lonely and he built his own support network by joining student organizations.

When Patel initially approached him about launching a program, Castro says, “it was pretty easy for me to support it.”

Are you a UCSF student who’s the first in your family to go to college or graduate school?

“The first-generation-to-college area stuck out for me as needing attention because the number of first-generation students who are making it to universities like ours has increased,” Castro said. “That was a great thing to see, but it also begged the question of whether our support services were well-equipped to help them succeed.”

“We can’t rely upon the strategies that worked five or 10 years ago for any of our students, especially first-generation-to-college students. As Vice Chancellor, I work with my colleagues across the campus to make sure that we are carefully listening to students’ needs, and adjusting and adapting as necessary,” he added.

Under the new initiative, one of Patel’s first orders of business is reaching out to each school to get a better sense of the status of first-generation-to-college students at UCSF. For example, in a preliminary analysis, she found that more than 40 percent of incoming students in the School of Pharmacy are the first in their families to go to college.

Other goals for the initiative include establishing an online presence including a new Facebook community, enhancing visibility, collaborating with other campus units to enhance support programs and creating more opportunities for students and mentors to interact.

Now lecturing at Fresno State while finishing up her doctorate, Pacheco still tries to make it back to San Francisco for the first-generation college student events because of its impact on her UCSF experience.

“The fact that [the program is] established and supported by the university helps me know that the university does value diversity – not just in the glossy brochures, but in the allocation of resources and time into making sure people like first-generation students feel included,” she said.