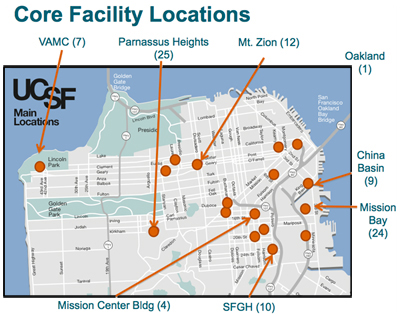 The UCSF Office of Research is launching a $2 million equipment award program for technology proposals that expand and improve access to core research facilities.

The awards will go to “enabling technology” centers on campus that propose ways to transform current access to technologies that support research for a broad range of laboratories.

Starting Monday, Aug. 20, faculty and core facility directors can submit proposals for equipment funding to improve the access and use of their facilities, with the goal of creating a sustainable, long-term and broad benefit for UCSF research. As an open-proposal initiative, other faculty will be able to comment, contribute ideas, or even combine multiple proposals during a two-week comment period, to build the strongest proposals possible.

“To stay competitive, science has to become more streamlined and efficient,” said Julie Auger, executive director of the Research Resources Program, who was recruited to UCSF in 2010 to oversee coordination of those resources. “A lot of these technologies cost easily $500,000 – our goal is to support facilities where there’s an enabling structure to make sure the technology is available to as many researchers as possible.” 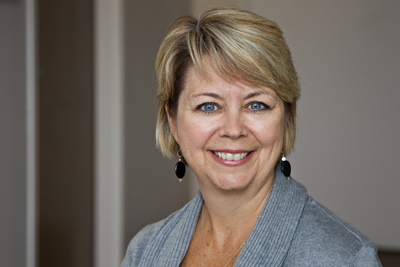 Auger, who had set up a similar program at the University of Chicago, arrived just as Operational Excellence was rolling out. Her new challenge was to find ways to support and better coordinate the wide array of facilities at UCSF that offer shared research equipment or resources, in an era of ever-tightening budgets.

In the process, the project also aimed to not only foster new collaborations on campus, but also create new career paths for the numerous PhD scientists who choose not to pursue academic faculty careers, but who understand the science necessary to run core facilities and provide a crucial service to faculty.

The new awards build upon work that is already underway through Auger’s office.

In July, the resources program launched a new, robust search engine in collaboration with the Clinical & Translational Science Institute to help faculty and staff find core facilities. Other new programs include the Core Exploratory Awards, designed to bring new users to the facilities; implementation of a software tool to streamline facility access; and core administration, including automated user-tracking and billing systems.

It also builds upon an increasing focus over the past few years on ways to make UCSF science as competitive as possible, both by fostering campus collaborations and eliminating inefficiencies. The program Auger leads was itself listed as a priority in the UCSF 2007 Strategic Plan and was designed to strengthen the university’s research enterprise.

Criteria: Award proposals will be assessed based on their uniqueness and necessity for the UCSF community, the ability to leverage the funding to raise additional funds, sustainability over the next five years, past record of success and demonstration that other funding sources are not available for the project.

In 2008, Jeff Bluestone, PhD, who was then interim Vice Chancellor of Research, created a work group to identify campus resources and define ways to centrally support them. Their work was validated in 2011 by the research committee for the Long Range Development Plan, which also identified a strong need for investment to support research infrastructure.

As a result, the chancellor allocated $2 million as part of the university’s 2012 enterprise-wide planning process, to enable core facilities to invest in the transformative technologies needed to support the research programs of scientists who wish to use the centers. The funding is not intended to support the centers, but will enable them to create the infrastructure needed for a sustainable business model.

“UCSF is making a financial commitment to support enabling technology centers in a more systematic way,” said Jim Wells, PhD, chair of the Department of Pharmaceutical Chemistry in the School of Pharmacy who is leading the Enabling Technologies Advisory Committee.

That’s a do-or-die mission now, as bioscience research increasingly relies on advanced – and expensive – technology to make significant advances, yet is constrained by highly competitive funding for research.

“As research gets deeper and deeper, and more and more complex, people need these technologies to conduct their research,” Wells said. “There’s no way that individual labs can be running these – they need a quart of milk, not the whole cow.”

But we still have a lot of those cows on campus.

UCSF currently has more than 80 core research facilities, comprising more than 780 pieces of research equipment. Those facilities also include some of the nation’s richest tissue banks, such as the Brain Tumor Tissue Bank, which has been organizing and providing samples for brain tumor research for 34 years.

The facilities also include the Center for Advanced Technology in Genentech Hall, which offers state-of-the-art equipment that ranges from microarray printers to genome analyzers, and the Small Molecule Discovery Center in Byers Hall, which screens molecular targets for compounds that could lead to new therapeutics. Likewise, the UCSF Genomics Cores include satellite facilities across campus, including the Institute for Human Genetics’ DNA Bank in Rock Hall, and the Genome Analysis Core in the Helen Diller Family Comprehensive Cancer Center.

The award program will be the third pilot on campus to try an open-proposal approach to bidding for campus funds. That system, which was piloted in June through the Clinical & Translational Science Institute and repeated last month on bids for new IT projects, is designed to both foster collaborations across campus and improve the caliber of the proposals being considered.