Jay Levy, MD, who co-discovered HIV in 1983, will be among the UCSF contingent of AIDS experts to participate in the XIX International AIDS Conference in Washington, D.C. later this month.

Halfway down a long corridor in the middle of UCSF Medical Center, a white-coated Jay Levy, MD, paused recently to reflect on HIV — a disease that has defined a generation, continues to plague the world and may yet be vanquished.

To Levy, who co-discovered HIV in 1983, the question is not how far we have come — it's how far we have to go. In his laboratory, he and his colleagues continue to uncover the biological mysteries of the virus, currently exploring how to use stem cell approaches to cure HIV infections and looking for the secrets of natural immunity to the virus.

He offered his perspective on AIDS on the eve of the XIX International AIDS Conference in Washington, D.C., where he and dozens of UCSF faculty will discuss the latest developments on the epidemic with tens of thousands of colleagues and other attendees from around the world. Faculty at UCSF and San Francisco General Hospital and Trauma Center are global leader in AIDS research and have been at the forefront of confronting the epidemic since its onset 30 years ago. They continue to set the standard of care for people with HIV worldwide.

HIV research is a field, Levy said, in which scientists traditionally have worked hard for long stretches without finding immediate answers. The experience for Levy, who joined the Department of Medicine and the Cancer Research Institute at UCSF in 1972, has been both rewarding and frustrating. Today, scientists still have many fundamental and unanswered questions about how it interacts with the immune system.

“When they asked me 20 years ago where are we in our knowledge of the immune system, I said: ‘2nd grade,’” Levy recalled. “Perhaps now we’re in 5th grade — we’ve got a lot to do.”

The Roads Behind and Ahead for HIV

Levy remembers the day in August 1981 when Paul Volberding, MD, now the director of the AIDS Research Institute at UCSF, called his lab and asked for his advice about a mysterious condition he’d seen in a patient.

Volberding was then a young physician at San Francisco General Hospital and Trauma Center. He’d gone there to become head of the cancer service, after finishing a post-doctoral fellowship with Levy. Volberding was puzzled by a patient with the hallmark lesions of a rare skin cancer known as Kaposi’s sarcoma. He had no idea what had caused the lesions or that the disease was already spreading in San Francisco. 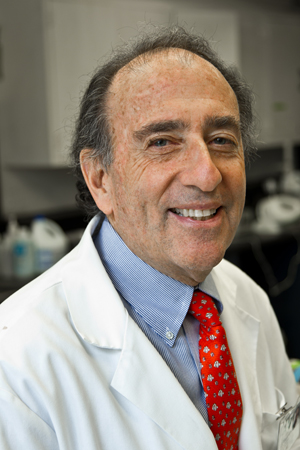 “We didn’t know what was happening in the community. At the time we thought this was a rare event,” said Levy.

This patient was one of the first and then one of many in San Francisco who would develop AIDS. As the epidemic exploded in San Francisco over the coming years, it would affect some 20,000 lives in the city and tens of millions more worldwide.

He and his colleagues, in what is now called the Laboratory for Tumor and AIDS Virus Research, got to work and soon isolated the virus, in 1983. But they then learned one of the big lessons of HIV: no matter the advance made, there is often so much further to go.

Once the virus was identified, many in the field began predicting that a vaccine would be right around the corner. But it has yet to be realized, despite decades of work.

The same story can be told in many other areas of HIV science: despite continual hope and some amazing successes, there have been many failures and there remain many lingering challenges, said Levy.

Moving from the corridor to an interview at his desk in the small office he has kept for more than 30 years — a modest space that yet sports photographs of himself with such Hollywood celebrities as Elizabeth Taylor — he admitted he knows this mixed bag of success as well as anyone.

An Elusive Search for a Resistance Factor

One of the big projects Levy and his colleagues have been tackling for the last 20 years has been the search for an elusive protein that is part of the immune system and contributes to the long-term survival of certain people with HIV.

In the early 1980s, people with HIV who remained healthy for a year despite the infection, were regarded as long-term survivors; they were then only expected to live a few more years with the virus. This changed as time marched on. “Now we have people who are documented surviving for more than 30 years without any need for therapy with their immune system functioning very well,” said Levy.

Behind this phenomenon may be an elusive immune function that some people seem to have and that Levy and his colleagues identified in the mid-1980s. Through this function, the body actively resists HIV infection and suppresses the virus. 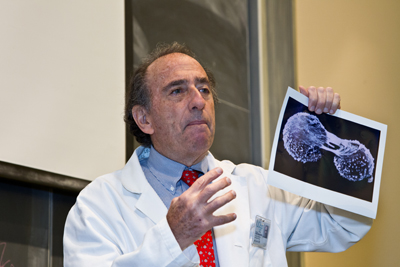 Since co-discovering HIV in 1983, Jay Levy, MD, and his research colleagues have dedicated their efforts to the study of AIDS.

Levy’s hypothesis is that certain people are long-term survivors because their immune system has mastered the ability to naturally resist the virus. White blood cells in their body, called CD8+ lymphocytes, produce an as-yet to be identified “resistance factor” known as the CD8+cell antiviral factor, CAF. This human protein blocks HIV replication.

“A major aim in the laboratory is to identify the full nature of CAF. Then, we can produce it and discover how everybody’s immune system can make this factor,” he said. Levy remains hopeful that they will achieve this important goal.

The intersection of history with hope is a theme of the AIDS 2012 international conference this month—hope because AIDS 2012 will witness the latest science in a number of promising areas that give renewed cause for optimism, including work toward an HIV cure.

The meeting itself is historic because it will be the first to take place in the United States since 1991. That’s because a longstanding U.S government ban on travel and immigration into the U.S. by HIV-positive individuals was not lifted until January 2010, and during the ban years, the conference organizers protested the restriction by not hosting any of the gatherings on U.S. soil.

“It’s gratifying to know that finally we are going to have this international AIDS meeting in the United States after more than two decades,” Levy said. “It’s been very sad for us not to be able to host this important conference where so many ideas are voiced and people gather from all over the world.”