The year 1982 was pivotal for Paul Volberding, MD. In the early days of the AIDS crisis, he was a talented research fellow who was getting ready to help launch San Francisco General Hospital & Trauma Center’s Ward 86, which would become the world’s first HIV/AIDS outpatient clinic. It opened its doors the following year.

The year 1982 was also important for Julia James, PhD, a postdoctoral candidate at the UCSF Center for AIDS Prevention Studies. That’s when she was born.

Both Volberding and James have made AIDS research their professional passion and both participated as members of the UCSF AIDS Walk team at Sunday’s 26th annual San Francisco AIDS Walk.

They and almost 300 others represented UCSF — which raised the third highest amount — at Golden Gate Park during an overcast and cool Sunday morning. The team collected more than $54,000.

Members of the UCSF AIDS Walk team were among the 20,000 participants who raised close to $2.7 million for AID research and services in the Bay Area.

Overall, the AIDS Walk drew more than 20,000 participants who brought in close to $2.7 million for the San Francisco AIDS Foundation, money that will support AIDS research and services throughout the Bay Area.

“UCSF has had a leading role in combating this epidemic from the very start, and the AIDS Walk has become the centerpiece of that spirit,” said Volberding, director of the UCSF AIDS Research Institute (ARI), one of the premier AIDS research entities in the world. The ARI brings together hundreds of scientists and more than 50 interdisciplinary programs throughout the University.

James, an Oxford-educated Rhodes scholar with a PhD in HIV immunology, chose UCSF for her post doc work because of its reputation in HIV research, built over the past three decades by people like Volberding. 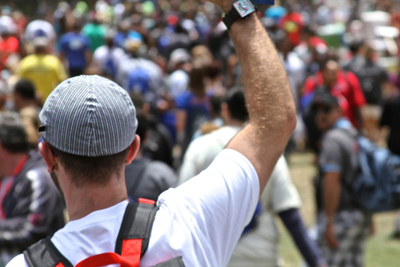 A participant at AIDS Walk San Francisco raises his arm in victory after crossing the finish line.

“It’s such an honor to be here at UCSF, and I know there are so many amazing researchers who were there on the front lines at the very beginning of the epidemic,” said James. “I know they’re going to be some of the people who find the solution to the epidemic, and I’m just really proud to be a part of it.”

As San Francisco commemorates 30 years of AIDS, Volberding reflects how far the country has come since the dark, scary days of the early 1980s.

“We had no treatments; everyone died,” he said. “There was fear everywhere, but now is a time of real hope. We’ve turned the corner on this disease. The treatments we have now are so effective, both for treating people and preventing transmission.

From the Unknown to Hope

More than 1.7 million Americans have been infected with HIV since the AIDS epidemic began and at least 617,025 have died of AIDS-related causes through 2008, according to the Centers for Disease Control and Prevention (CDC) which also reports that there are 682,668 people living with HIV in the U.S. 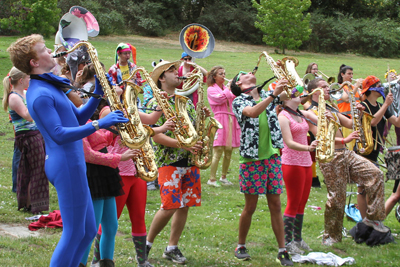 Steven Leroy, an incoming first-year UCSF School of Dentistry student, chose to walk in support of his HIV-positive friends.

“It feels absolutely amazing. Just seeing thousands of people coming together for a noble cause means a lot,” he said. “UCSF has done so much for the community, and it’s such an honor to know that I’m in some way helping with that. I feel uplifted to be a part of this — it feels great to know that you’re making a difference.”

The UCSF AIDS Walk team consisted of physicians, researchers, nurses, staff members, faculty and students, as well as their friends and family members. Some walked to help the cause, others to honor loved ones who had lost their battles with AIDS.

The Hurdle of Public Awareness

Although — or maybe because — people are living much longer with HIV due to breakthroughs in antiretroviral combination therapy, the number of newly infected HIV cases in the U.S. has remained steady at approximately 50,000.

“Public awareness is a challenge for us,” Volberding said. “In the early days of the epidemic, everyone knew about it. There were stories all over the place. These days, it’s a quieter story but I think we really need to work hard to communicate the need for identifying, bringing people into treatment, and keeping them in treatment. 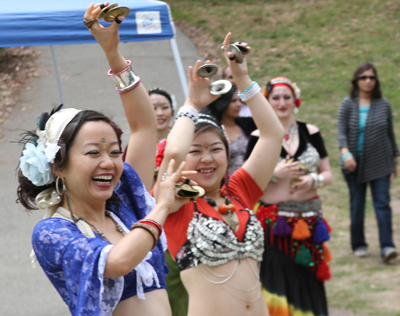 “With approaches that rely on effective community engagement and communication, I’m confident we can turn this epidemic around, at least in places like San Francisco,” he said.

Volberding is the unofficial team captain of the UCSF AIDS Walk team. His work has helped UCSF become a trailblazer in AIDS research and treatment for people with HIV. His work has inspired others, including James.

“I’m passionate about HIV research,” she said. “I want to bring awareness that AIDS is still a problem in America and together as a nation, we can forge ahead and continue to make significant strides in research.”

As the UCSF team gathered for the traditional AIDS Walk group photo, Volberding reflected on the countless number of patients he’s treated and the lives he’s inspired — and those who inspired him in return — because of his work.

“UCSF, as usual, is amazing,” he said. “This team, the people from across the University, they’re engaged in all this, and it makes us all proud.” 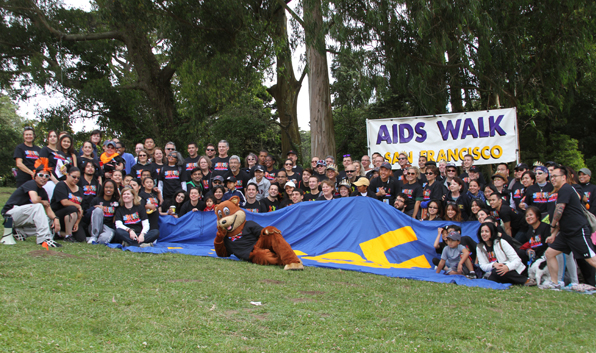 Members of the UCSF AIDS Walk team gather for a group photo at Golden Gate Park before the start of the 2012 AIDS Walk San Francisco.