UCSF will host a forum, “What Now? Health Reform in the Aftermath of the Supreme Court Decision,” on Friday, June 29, from 11 a.m. - 1 p.m., Toland Hall, Parnassus campus.
The public is welcome to attend.

The decision is expected to have wide-ranging consequences for health care in America and will effect the daily work of scores of UCSF faculty and staff engaged in health sciences research, policy and education, and patient care. Experts at UCSF and UC Hastings will talk about the aftermath of the Supreme Court ruling at a public forum on Friday, June 29.

UCSF surgeon John Maa, MD, a longtime advocate for health reform who is dedicated to improving quality and access to care, has been closely monitoring the news. The high court announced on Monday that it will rule on the constitutionality of the sweeping health care law on its last day in session on Thursday.

Whatever the high court's ruling, Maa says, health care professionals should continue to work to improve the nation's ailing health care system. Part of the problem with the Patient Protection and Affordable Care Act, is that not enough front-line clinicians — doctors, nurses, pharmacists and others — helped to craft it, Maa says.

Health care professionals “can play a very important role by having the courage to travel to Washington, D.C., to prepare white papers, and to submit testimony and to become involved in the discussion,” he said during an interview on Thursday.

Maa, an assistant professor of surgery and director of UCSF’s Surgical Hospitalist Program, describes health policy as his “passion” and has worked to bring a clinician’s perspective to discussions about health care reform, at both the state and national level. In 2004, he was selected as a Health Care Policy Research Fellow by UCSF’s Philip R. Lee Institute for Health Policy Studies, one of the nation’s premier centers for health policy and health services research.

His interest in reforming health began 20 years ago as a student at Harvard Medical School. Maa spent a six-month sabbatical in Washington, D.C. in the months after passage of the 2010 health reform law. “I witnessed the pitch battle between the Democrat and Republican parties over the law. It was very partisan, it was vitriolic and it was very disappointing to see the acrimony on Capitol Hill.”

After a lengthy national dialogue about “Obamacare” that was mired with misleading information about death panels, health care rationing and the like, the Supreme Court heard three days of hearings in March. The central challenge to the law is whether the government can mandate that individuals buy health insurance or pay a fine.

If the justices rule that the health care law is unconstitutional, a recent poll found that 77 percent of Americans want Congress and the president to work on new legislation to overhaul health care.

But Maa expects no real progress on health care reform in the months leading up to the November presidential election and, depending on the outcome, thinks it could be stalled for decades.

Maa says the nation should have an intelligent and thoughtful discussion to answer the fundamental question about whether basic health care should be a constitutionally protected right.

“I believe that our nation should work collectively towards crafting a 28th amendment to the United States Constitution and determine whether access to basic and emergency health care is a constitutionally guaranteed right,” he says. 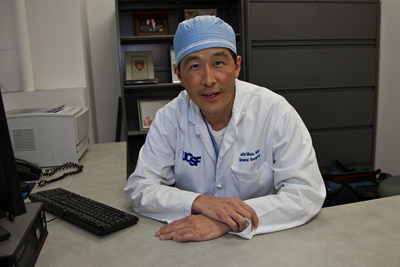 From there, Maa says, the nation can consider the equally important individual responsibilities that are inherent with that right, such as smoking cessation and not drinking alcohol too frequently.

“I think it will take many years to reframe the discussion, perhaps along the lines of what [UCSF] Chancellor [Emeritus] Phil Lee once said, ‘that health care is a public good.’ And I think we will have to separate self interests from societal best interests as we move forward in this discussion.”