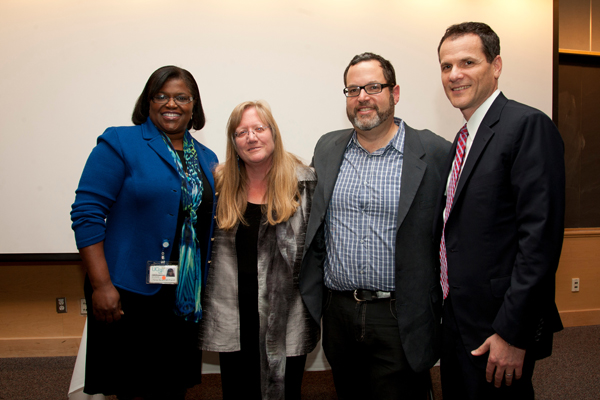 Three members of the UCSF community were recognized with the Chancellor's Award for Gay, Lesbian, Bisexual and Transgender Leadership during a ceremony on June 13.

Karasic has been active in teaching and mentoring at UCSF and serving on the Chancellor's Advisory Committee on LGB issues in its early days, from 1996 to 2000. He proposed and successfully advocated that the committee become an LGBT committee by including transgender issues and he identified and recruited transgender people at UCSF to participate on the committee. Karasic was chair of the original domestic partners subcommittee, where he worked toward securing domestic partner benefits for UCSF employees.

He also has been organizing education about LGB, HIV and transgender issues at UCSF and within the American Psychiatry Association (APA). He organized a groundbreaking session at the APA's meeting in 1993 with a transexual psychiatrist Shoshanna Gillick, MD, on the topic of being a psychiatryist transitioning at work. Karasic has conducted numerous sessions on topics such as "Teaching HIV/AIDS Issues to Medical Students."

Karasic has taught about LGBT issues over the years in the Department of Psychiatry at the UCSF-affiliated San Francisco General Hospital and Trauma Center. He has served on organizations, including the Association of Gay and Lesbian Psychiatrists, the APA LGB Caucus and the San Francisco Human Rights Commission's LGBT Advisory Committee. Karasoc is the author of more than 20 published, peer-reviewed papers.

Further, he provides care to HIV-positive and transgender patients through his clinical work, which has been consistently exemplary. He is often called upon by psychologists and psychotherapists to provide consultation on challenging cases throughout California and beyond.

In short, he is recognized for creating a supportive environment for LGBT students, faculty, and staff; elevating the status of LGBT people at UCSF; and demonstrating that UCSF is a powerful partner in efforts to improve health care disparities.

"Wherevery he goes, Dan exemplifies and elevates the leadership that UCSF has brought to the field of HIV prevention and care, transgender equality, and LGBT dignity and pride," wrote one of his nominators for the award. 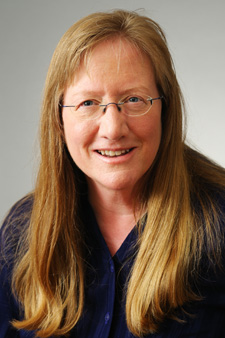 She also staffs the Chancellor's Advisory Committee on LGBT issues and is a valued resource across campus, the medical center and beyond. In fact, Snowdon helped establish this Chancellor's award. This year, the committee unanimously concurred that the time has come to honor her myriad contributions to and tireless advocacy for the campus LGBT community both locally and nationally.

Among some of her accomplishments, Snowdon as:

A second-year obestetrics/gynecology resident, Obedin-Maliver is being recognized for her LGBT leadership across education and research and her work raising the visibility and status of this community at the local, statewide and national level.

Before coming to UCSF, she attended medical school at Stanford University, where she worked to put LGBT health issues on the local and national medical school stage. She co-created a series of novel presentations, "The Real Deal from Your Queer Peers," and co-founded and served as principal investigator for the Stanford LGBT Medical Education Research Group (MERG).

In September 2011, Obedin-Maliver published a paper, "Lesbian, Gay, Bisexual and Transgender-Related Content in Undergraduate Medical Education," in the Journal of the American Medical Association (JAMA) a comprehensive study based on her work at the MERG, which found that few schools teach about primary care issues, such as chronic disease, unhealthy relationships, coming out, substance abuse, adolescent health and transgender-specific information.

At UCSF, she has worked to raise the visibility of LGBT issues, serving on a daily basis as an "out" UCSF resident, making herself available to medical students, residents, and staff who are struggling to balance their professional identities and their LGBT status. She also has been instrumental in planning the inaugural LGBTQ Perinatal Care Conference at UCSF.

Obedin-Maliver's recent endeavor has been to advocate to the State Legislature in support of AB 2356, a bill that would allow lesbians to use fresh sperm for intrauterine insemination to achieve pregnancy. Currently, semen from a non-sexually intimate donor must be quarantined and frozen. Frozen semen is much less effective at achieving pregnancy than is fresh semen.

Introduced this year on Feb. 24, AB 2356 was double referred to Assembly Local Government and Revenue & Taxation Committees. The bill passed the Assembly Committee on May by a 5 to 13 vote and passed the Assembly Floor on May 3 by a 50 to 24 vote, according to Equality California.

Editor's note: This story was updated to include photo of recipients.