The cause of more than eight in 10 liver cancers in the United States is chronic infection with the hepatitis B or hepatitis C virus. Today the number of new hepatitis infections is declining. But just as there has been a lag between the decline in smoking and the drop in lung cancers, it may take many years before the trend toward fewer hepatitis cases and better hepatitis treatments leads to fewer liver cancers instead of more.

Nguyen — who emigrated as a child from Vietnam — is fighting hepatitis in Bay Area Asian American communities. Through outreach and training of key community members and through campaigns in ethnic media, Nguyen and his collaborators aim to help reverse the US liver cancer trend as quickly as possible.

Hepatitis B Is Common

Why focus on Asian Americans? Hepatitis B is common in many parts of the globe, including Asia. Because of this, liver cancer is the third most common cause of cancer death worldwide. Immigrants from Asian countries are infected at high rates. So too are their children. For instance, in San Francisco, where according to the 2000 census nearly one in three people is Asian or of Asian ancestry, an estimated one in 10 Chinese is infected with hepatitis B.

Today in the United States, hepatitis C mainly is spread by IV drug users sharing needles. There is not yet a commercially available vaccine. On the other hand, there are vaccines to prevent hepatitis B infection. The vaccine strategy originated with pioneering research at UCSF. Children in the United States now are routinely vaccinated early.

But mothers can easily pass hepatitis B to their children in the womb. This is the major source of existing hepatitis infections in the U.S. Asian American community, Nguyen says. In addition, many children who immigrate to the United States miss school vaccinations and risk becoming infected later. 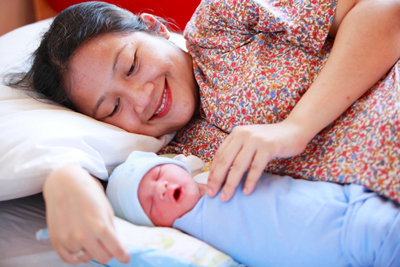 While most adults clear the hepatitis B virus without becoming chronically infected, most infants do not. Once infection becomes chronic, treatment can help control the virus, but chronic infection lasts a lifetime.

Only a minority infected with hepatitis go on to develop liver cancer. But because so many in Asian communities already are infected at birth, Nguyen explains, some are developing liver cancer in their 30s or even in their 20s. Increasing liver cancer screening among people who test positive for hepatitis is an important outreach goal, Nguyen notes.

Hepatitis often has no symptoms. “Some people get vaccinated without getting tested first to see if they already have been infected,” Nguyen says. “They think they are protected, when in reality they already may be infected, and infecting others.”

In addition to serving on the President’s Advisory Commission on Asian Americans and Pacific Islanders, Nguyen is a partner in a San Francisco Department of Public Health program to combat hepatitis B. The aim of “San Francisco Hep B Free” is to screen, vaccinate and treat all Asians and Pacific Islanders who live in the city, in part by providing free or low-cost testing.

Nguyen also directs the Vietnamese Community Health Promotion Project through which he and his colleagues have targeted the community with messages via radio, television, print publications and online media. Vietnamese in the United States have the highest rate of liver cancer, about 11 times higher than the rate among whites.