UCSF has named Joseph Guglielmo, PharmD, an international expert in the clinical use of antimicrobials and chair of the Department of Clinical Pharmacy, as interim dean of the UCSF School of Pharmacy, starting July 1. 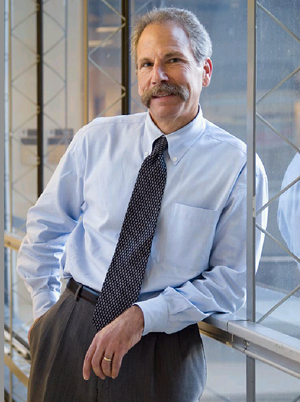 Chancellor Susan Desmond-Hellmann, MD, MPH, who announced the appointment in an email to the UCSF community, noted the school’s pre-eminence in its field and the multiple contributions Guglielmo has made to UCSF in the 33 years he has served the University, as well as his breadth of leadership in education, clinical pharmacy practice and research.

Guglielmo is a renowned educator, clinical pharmacist and expert in the evidence-based, safe and effective use of antimicrobials to treat infections. He is a professor in the Department of Clinical Pharmacy at UCSF, where he joined the faculty in 1979, and holds the Thomas A. Oliver Chair in Clinical Pharmacy. He also serves as assistant director for pharmaceutical services in the UCSF Medical Center, where he maintains a clinical practice as an infectious-disease pharmacist.

Widely known as an advocate for pharmacy research, Guglielmo has overseen a 44 percent increase in his department’s overall faculty research funding since he took the helm in 2006, including grants from the National Institutes of Health. During that time, the school also has consistently been ranked first in its field by the national U.S. News & World Report survey of PharmD training programs.

Guglielmo’s international contributions to antibiotic safety include the UCSF Medical Center Antimicrobial Stewardship Program, which he developed in the 1980s to study and improve the practices governing the use of antimicrobials in hospitals. This evidence-based program was one of the earliest programs of its kind in the United States.

In 2007, Guglielmo created the UCSF Medications Outcome Center to research and consistently improve medication management in the UCSF Medical Center and beyond. He also created the HIV Pharmacy Program at the UCSF Medical Center, specifically supporting the Women and Men of Color Clinics. A firm believer in forging relationships among clinical scientists and their colleagues in basic and translational science, he has collaborated with neuroscience and neurology colleagues at UCSF on trying to develop a treatment for prion disease, and was actively involved in the UCSF Clinical and Translational Science Institute (CTSI) at its inception and during its renewal.

Guglielmo has taught pharmacy and medical students, residents and fellows for decades and is the recipient of many teaching awards, including the UCSF Lifetime Mentorship Award, Resident Preceptor of the Year Awards, UCSF School of Pharmacy Long Teaching Awards, and the Academic Senate Distinction in Teaching Award. He is the author of more than 110 peer-reviewed papers, the majority related to anti-infective agents.

A search is underway to find a permanent new dean for the UCSF School of Pharmacy to replace Mary Anne Koda-Kimble, PharmD, who will retire at the end of this month.

Below is the full letter from the chancellor.

I am pleased to announce that Joseph Guglielmo, PharmD, has been named Interim Dean of the School of Pharmacy, effective July 1. His appointment has been approved by the UC Regents, and a search is under way for a permanent dean to replace Mary Anne Koda-Kimble, PharmD, who will retire at the end of June.

In its decades as the pre-eminent school of pharmacy, the school has never been stronger. It continues to lead the nation in NIH support for pharmacy-related research and to serve as a bellwether for the field. The school not only is successfully recruiting the top faculty and most promising students and conducting world-class research, but also is advancing into new territories such as bioengineering, devices and diagnostics.

Joe has ably served the school and University for 33 years and has been closely involved with the continuing development of the school's top-ranked doctor of pharmacy curriculum, while leading his department in attracting record research funding. Joe is chairman of the Department of Clinical Pharmacy, a position he has held since 2006, and serves as the assistant director of Pharmaceutical Services for the UCSF Medical Center, enabling it to build upon the most advanced clinical research in pharmaceutical care to constantly improve medication use and safety. In addition, Joe holds the Thomas A. Oliver Endowed Chair in Clinical Pharmacy and served the campus as chair of the Committee on Academic Personnel for the Academic Senate from 2003-2005.

Joe earned a doctor of pharmacy degree from the University of Southern California and joined the UCSF School of Pharmacy in 1979 after a UCSF residency in pharmacy practice. He is a nationally recognized expert on the use of drugs to control infection, and his research has been widely published in professional journals. In addition to having received several teaching awards, his knowledge has been shared worldwide through his contributions as an editor of Applied Therapeutics and Handbook of Applied Therapeutics, and as author or editor of chapters in other textbooks, including Current Medical Diagnosis and Treatment.

This is a tremendously exciting time for the school. Mary Anne is leaving an impressive legacy, having strengthened and expanded laboratory-based research programs as well as cultivating efforts to move research discoveries closer to clinical application, and supported the development of new ways for pharmacists to share their unique and much-needed medication expertise. I am confident that with Joe’s leadership, the School of Pharmacy and UCSF will continue on this path of excellence.

Please join me in supporting Joe as he leads the finest pharmacy school in the nation.