Chronic pain, by definition, is difficult to manage, but a new study by UCSF scientists shows how a cell therapy might one day be used not only to quell some common types of persistent and difficult-to-treat pain, but also to cure the conditions that give rise to them.

In their study, published in the May 24, 2012 issue of Neuron, the scientists transplanted immature embryonic nerve cells that arise in the brain during development and used them to make up for a loss of function of specific neurons in the spinal cord that normally dampen pain signals.

A small fraction of the transplanted cells survived and matured into functioning neurons. The cells integrated into the nerve circuitry of the spinal cord, forming synapses and signaling pathways with neighboring neurons. 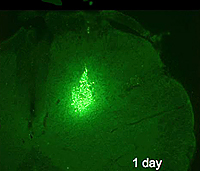 In this cross section of a mouse spinal cord, cells transplanted from the brain, bright green, are shown one day after injection.

As a result, pain hypersensitivity associated with nerve injury was almost completely eliminated, the researchers found, without evidence of movement disturbances that are common side effects of the currently favored drug treatment.

“Now we are working toward the possibility of potential treatments that might eliminate the source of neuropathic pain, and that may be much more effective than drugs that aim only to treat symptomatically the pain that results from chronic, painful conditions,” said the senior author of the study, Allan Basbaum, PhD, chair of the Department of Anatomy at UCSF. 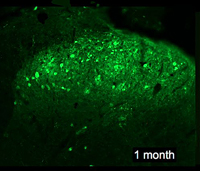 One month after injection the transplanted cells have dispersed within the spinal cord, near the injection site.

Although pain and hypersensitivity after injury usually resolve, in some cases they outlast the injury, creating the condition of chronic pain. Many types of chronic pain are induced by stimuli that are essentially harmless — such as light touch — but that are perceived as painful, according to Basbaum.

Chronic pain due to this type of hypersensitivity is often a debilitating medical condition. Many people suffer from chronic neuropathic pain after a bout of shingles, years or decades after the virus that causes chicken pox has been vanquished. Chronic pain is not merely prolonged acute pain, Basbaum said. 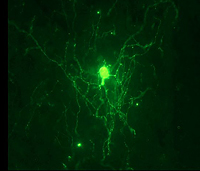 The transplanted cells grew long processes, called axons, through which they are connected to other nerve cells within the spinal cord of the host.

Those who suffer from chronic pain often get little relief, even from powerful narcotic painkillers, according to Basbaum.  Gabapentin, an anticonvulsant first used to treat epilepsy, now is regarded as the most effective treatment for neuropathic pain. However, it is effective for only roughly 30 percent of patients, and even in those people it only provides about 30 percent relief of the pain, he said.

The explanation for neuropathic pain, research shows, is that following injury neurons may be lost, or central nervous system circuitry may change, in ways that are maladaptive, compromising signals that normally help dampen pain. These changes contribute to a state of hyper-excitability, enhancing the transmission of pain messages to the brain and causing normally innocuous stimuli to become painful. 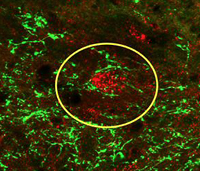 This image shows the interconnectedness of the transplanted cells (green) and the neurons of the host (red). Mircrographs: Joao Braz, Neuron

The inhibitory neurons that are damaged in the spinal cord to cause pain hypersensitivity release a molecule that normally transmits inhibitory signals — the neurotransmitter GABA. A loss of GABA inhibition also is implicated in epilepsy and may play a role in Parkinson’s disease. Gabapentin does not mimic GABA, but it helps to compensate for the loss of inhibition that GABA normally would provide.

However, in those experiments the cells — which originate in a region of the forebrain known as the medial ganglionic eminence — were transplanted within the brain itself, which is their normal home.

Upon hearing about the research, Basbaum became interested in transplanting the same cells into the spinal cord as a potential treatment for the loss of GABA-driven inhibition in neuropathic pain. Success was by no means assured, as cells normally do not survive outside their natural environments within such a complex organism.

Another co-author of the Neuron study, UCSF researcher John Rubenstein, PhD, has made major progress in identifying molecules that can be manipulated to lead an embryonic stem cell to go through developmental stages that cause it to acquire the properties of GABA neurons that derive from the medial ganglionic eminence.

Pain hypersensitivity may develop following nerve injury because inhibitory nerve cells are lost in the spinal cord, increasing the likelihood of pain signals being transmitted to the brain. UCSF pain researcher Allan Basbaum, PhD, chair of the Department of Anatomy, led studies in which researchers transplanted immature inhibitory neurons from the cerebral cortex into the spinal cord, where they integrated into the host nerve circuitry and helped reverse injury-induced pain hypersensitivity. Drawings: Allan Basbaum, UCSF

According to Kriegstein, who directs the Eli and Edythe Broad Center of Regeneration Medicine and Stem Cell Research at UCSF, “This research is at a very early stage, and we’re a long way from thinking about it in human trials, but we do have a method of making cells that are like these inhibitory neurons, starting with human embryonic stem cells.”

As a step toward eventual therapies, the UCSF team plans to graft fetal human cells from the medial ganglionic eminence, or cells derived from human embryonic stem cells, into a rodent model of neuropathic pain, to see if the human cells also will alleviate neuropathic chronic pain.

“Unlike drugs, the transplanted cells can have very focused effects, depending on where they are transplanted,” Kriegstein said.

According to Alvarez-Buylla, a leading scientist among those working to define the potentialities of various cells in the developing brain at different stages, "One of the amazing properties of these cells from the medial ganglionic eminence is their unprecedented migratory capacity, which enables them to navigate through multiple terrains within the central nervous system, and to then become functionally integrated with other cells. Those properties have proved useful in other places where we have transplanted them, and now in the spinal cord.”

Joao Braz, PhD, an assistant research scientist, and Reza Sharif-Naieni, PhD, a postdoctoral fellow, both working in the Basbaum laboratory, carried out the bulk of the experiments published in Neuron. The authors have a patent pending on the treatment outlined in the study.

Pain Control is Focus of Allan Basbaum’s Research Career
May 2, 2012