Autism and related disorders that profoundly affect behavior and development are diagnosed more often today than ever before.

UCSF's Lauren Weiss talks about autism and its prevalence:

But despite its rising profile in the media and in the minds of parents, still little is known about what causes autism. Confronted by this stubborn mystery, Lauren Weiss, PhD, a researcher with the UCSF Institute for Human Genetics and Department of Psychiatry, is nonetheless optimistic.

Buoyed by her early-career success, Weiss believes that the identification of genes and biomarkers linked to autism will reveal why the brains of those afflicted with the disorder function abnormally. Weiss expects studies to lead to new ways to identify those at risk, and to new ideas about prevention and treatment. Currently, behavioral and other therapies usually offer only modest benefits.

Weiss already has pinpointed genes in autism, and expects to gradually gain a better handle on how to define autism and its variations in molecular and behavioral terms.

“Autism is a common cause of severe disability to individuals and families across the lifespan, with extremely limited treatment options,” she says. “One of my primary goals is to work with collaborators to build a large research database with rich molecular and clinical data, so that we can use our genetic information to identify subsets of autism, to gauge autism risk, and to help evaluate preventive and treatment strategies for individual patients.”

Autism Disorders May Affect One in 100

Autism and similar disorders are now thought to affect about one in 100 people. But remarkably, autism was not recognized as a distinct syndrome until the mid-twentieth century. 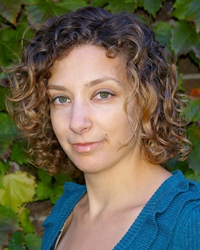 Hallmarks include extreme difficulty relating to and communicating with others, significant delay and deficits in developing language and other skills, and narrow, intense interests. It is unclear who is at risk, and what goes on in the brain to give rise to these characteristics.

Some genetic mutations are strongly associated with autism. More often than not, one badly behaving gene acting alone is not enough to cause the disorder, Weiss says. Many genes are likely to contribute to autism risk, but few have been identified. Those that have been implicated in autism disorders account for only a fraction of the genetic causes.

“But despite the evidence for a very strong genetic basis for autism, for most families affected by autism we cannot point to a single gene or region of the genome that plays a role for autism in that family.”

To discover autism-associated genes and biochemical pathways, Weiss — a recent recipient of a prestigious, $2.3 million National Institutes of Health Director’s New Innovator Award — is looking at families with certain, rare syndromes in collaboration with UCSF pediatrician and scientist Katherine Rauen, MD, PhD. The syndromes they are investigating are caused by already-identified mutations, and include autism as a component in many but not in all cases.

Ever mindful that variant genes acting together may be more likely to cause autism than one gene acting alone, in studying families affected by these rare syndromes Weiss hopes to identify specific variants in genes that can cause autism by acting together with a genetic mutation that is already known to be associated with the rare syndrome. The search for autism genes in this study becomes less like looking for a needle in a haystack — or at least the haystack is smaller.

Autism occurs about four times more often in males in comparison to females. In another study, Weiss is exploring how genetic and hormonal differences between the sexes can be used to uncover genetic risk factors for autism. “We expect to gain novel insight into an important source of variability in autism,” Weiss says. “Information about what protects females from developing autism could lead to strategies for reducing risk in males.”

Weiss already has had some success sleuthing genes in which variations are associated with elevated autism risk. When she was a postdoctoral fellow at the Broad Institute of MIT and Harvard — before coming to UCSF three years ago — Weiss and an international team of colleagues undertook a two-pronged approach to survey the entire DNA of individuals within affected families. She worked with samples from more than 1,000 affected families, maintained by the Autism Genetic Resource Exchange (AGRE) and the U.S. National Institute of Mental Health (NIMH).

The families included at least one member with autism and at least one additional member with autism or an autism spectrum disorder, such as Asperger’s syndrome. The researchers searched for repeated or deleted bits of DNA – alterations in the genome that can result in too much or too little production of key proteins. The scientists used this approach to strongly implicate a rare, but previously unknown and strongly acting DNA variant in individuals with autism.

Using another method, called a genome-wide association study (GWAS), the scientists found a second, more common and previously unknown variant that was associated with autism, but not as strongly. Although the DNA variation they identified is only present in five percent of the population, the researchers found that a protein encoded by an adjacent gene is on average less abundant in autopsied brains of individuals with autism, in comparison to brains of people without autism.

Despite the modest association with autism of the inherited genetic mutation identified in the GWAS study, follow-up investigations of the nearby gene and encoded protein may be more promising. Weiss is working to identify a network of genes — many previously unsuspected — that may be contributing to autism by lowering levels of this protein, called semaphorin 5A. The protein already is known to play a role in directing the growth of nerve cells during development.

Genes and environment — nature and nurture — both play a role in autism. The apparent increase in the rate of autism has fueled interest in environmental causes. Speculation about such causes is often in the news. But so far, no environmental suspect has been convincingly linked to autism in scientific studies. 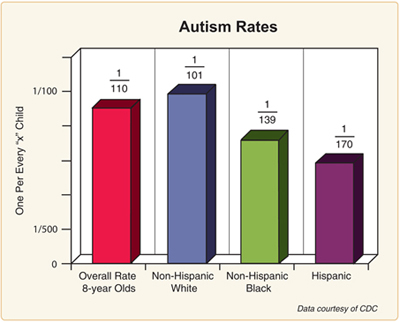 In addition, the increase in autism diagnosis is suspected by many to be due in part to greater awareness, and to the inclusion of less severe, but related disorders. Today “autism spectrum disorder” encompasses not only severe autism, but also conditions such as Asperger’s syndrome, which often eludes detection. Individuals with Asperger’s typically live independently as adults and may be highly intelligent, but they commonly struggle to attain a normal degree of physical grace and conversational ease, perceptiveness, sensitivity and flexibility in social situations, and they frequently pursue near-obsessive, narrow interests.

The next edition of the Diagnostic and Statistical Manual — guidelines issued by the American Psychiatric Association — isexpected to specify more narrow criteria that may result in fewer people being diagnosed with an autism spectrum disorder.

Recent research led by Neil Risch, PhD, head of the Institute for Human Genetics at UCSF, has provided evidence for the importance of both genes and environment in autism. In the largest twin study of families affected by autism, Risch and colleagues found that fraternal twins  — who are as genetically similar as other siblings — nonetheless were more likely to have autism in common than most brothers and sisters. This points to the influence of an environmental exposure, perhaps something in the womb, according to Risch.

It would be no surprise if the effects of genetic variants prove to interact with environmental exposures, according to Weiss and Risch. In another collaborative study Weiss is working with a group led by Kaiser epidemiologist Lisa Croen, PhD, director of the Autism Research Program at Kaiser Permanente of Northern California, identifying and analyzing genetic variants and environmental exposures in pregnant women and in their children with autism.

“We hope to start exploring gene-by-environment interactions and to be able to propose some mechanisms by which those interactions might operate,” Weiss said.