UCSF Chancellor Susan Desmond-Hellmann, MD, MPH, proposed to the University of California Regents on Jan. 19 that a small working group be formed to help UCSF explore options to secure its financial future so it can realize its vision to become the world’s preeminent health sciences innovator.

She emphasized that UCSF must create a financially sustainable enterprise-wide business model, one of five goals she and her leadership team set as part of a three-year plan outlined by the chancellor in her October State of the University Address.

Desmond-Hellmann said that she and her leadership team believe that UCSF needs to “make changes to UCSF’s business model to reach our aspirations of preeminence.” UCSF is looking at options that include:

“We feel that we would like to operate with maximum flexibility to tap into expertise and operate in a way that allows us to respond to the changing environment,” she said, with members of her leadership by her side.

The chancellor said the charge of the working group would be to explore alternate financial relationships between UCSF and the UC system, as well as alternate governance strategies that reflect UCSF’s status as the sole UC campus with a scope that is limited to graduate health sciences.

Desmond-Hellmann recommended that she submit a list of proposed working group members to Regents Chair Sherry Lansing and UC President Mark Yudof and that the working group present its findings to Regents in July 2012.

Lansing, who says she has an open mind to the proposal, gave approval for UCSF to take the next step and she thanked Desmond-Hellmann for her presentation, which had been delayed due to protestors that interrupted the meeting.

“I don’t assume we have all the questions answered that’s why we need a working group to dig into the details,” Desmond-Hellmann told the Regents.

Simultaneously, UCSF will continue to focus on reducing its administrative and operational expenses – an Operational Excellence initiative launched in early 2010. UCSF also will continue to explore ways to increase existing revenue, she said, and raise new revenue.

Outside the Regents’ meeting, Desmond-Hellmann said UCSF has no interest in privatizing or seceding from the UC system. “Let me be clear, we are strongly united with UC and our nine sister campuses. What I am proposing is that we explore all options for creating a financial model that enables UCSF to best position itself to meet the challenges of a 21st century academic medical center.”

She stressed that UCSF would still operate within the framework of the UC system and would continue to pay for services, such as employee pension and benefits, legal services and presidential initiatives.

“What is at stake is our ability to deliver on our public mission and serve the people of California,” she said before the Regents’ meeting. “To meet our public mission, we must aggressively confront our financial challenges. A successful and sustainable business model will allow us to strengthen our excellence in education, research and patient care.” 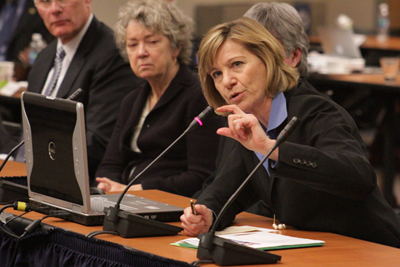 With members of her leadership team at her side, UCSF Chancellor Susan Desmond-Hellmann delivers her presentation to the UC Regents on Jan. 19 at UC Riverside.

In her first address to Regents on the status of UCSF since becoming chancellor in August 2009, Desmond-Hellmann began with an overview of the campus that has four Nobel laureates. She cited the University’s remarkable progress in achieving its three-fold mission of training the next generation of health sciences leaders, leading scientific discovery as one of the top biomedical research institutions in the world and advancing health care as one of the top-10 medical centers in the nation.

UCSF received $532.8 million in funding from the National Institutes of Health in 2011, once again garnering the most funds among public institutions in the United States, second overall after private Johns Hopkins University.

UCSF’s tradition of excellence — one that began nearly 150 years ago with the founding of Toland Medical College — attracts outstanding supporters, Desmond-Hellmann said, as evidenced by the many leaders from industry, academia and business who serve on the UCSF Foundation Board, Chancellor’s Advisory Board and UCSF Medical Center Executive Council. She said these ardent supporters have helped strengthen the University over the years, including supporting phenomenal growth at UCSF Mission Bay, where a new medical center is set to open in 2015.

Desmond-Hellmann also briefly discussed UCSF’s short-term action plan, which spells out five ambitious goals: to provide unparalleled care to patients, improve health through innovative science, attract and support the most talented and diverse trainees in the health sciences, and continue to be the workplace of choice for top-tier talent.

At the Regents meeting, Desmond-Hellmann focused on the importance of achieving the fifth goal — to create a financially sustainable enterprise business model — to ensure the other four goals can be accomplished.

Taking the Next Steps

UCSF is already taking steps to find ways to boost revenue sources and achieve cost savings, Desmond-Hellmann said, through ongoing efforts being led by Senior Vice Chancellor John Plotts. That work continues on many levels through Operational Excellence, an initiative aimed at improving the excellence and efficiency of key operational and administrative services while also reducing costs. The University is on track to meet its target of $50 million in annualized savings by June 2013, she said thanks to the hard work of more than 400 faculty and staff across UCSF who have created and helped implement streamlined practices across the organization.

Why UCSF is Unique

As part of Operational Excellence, UCSF recently launched an electronic procurement system in collaboration with UC Berkeley and introduced an online expense reimbursement system. The University is also well underway in implementing budgeting and reporting solutions. In addition, UCSF built a shared Human Resources services organization and began piloting it earlier this month. By May 2012, the entire campus community of more than 20,000 employees is expected to be serviced by this new HR organization.

The chancellor noted, however, that UCSF cannot cut its way to achieving excellence.

Desmond-Hellmann told the Regents she expects one of the working group’s tasks to be exploring alternative governance strategies that would allow UCSF to benefit from the region’s considerable expertise in health care, biotech industry and business.

During her nearly three-year tenure as UCSF chancellor, Desmond-Hellmann has championed forging new industry partnerships to more quickly translate research discoveries for the benefit of patients. In recent years, UCSF has connected growing numbers of scientists with the resources and expertise of pharmaceutical, biotech and high-tech companies to move science and inventions closer to becoming drugs, therapeutics or products to improve health.

In the future, UCSF could find new revenue streams through efforts such as spinning off successful biotech companies, creating a joint venture for an outpatient pharmacy with a for-profit pharmaceutical company and exploring new opportunities on the technology transfer front.

The chancellor noted that Genentech, Chiron and other biotech companies were created based on science that came from UCSF. “Company creation and innovation are part of our DNA,” she told the Regents.

The chancellor said the purpose of the working group is to explore options that would strengthen UCSF financially and also leverage its position as a leading health sciences university with one of the country’s top medical centers. The working group is not designed to help UCSF forgo its status as a public University, she said, or discard the long-held tradition of shared governance through the segment of the UCSF faculty eligible to serve in the University of California Academic Senate.

In fact, the UCSF Academic Senate is working to give a greater voice to all faculty at UCSF and recently created a task force to carefully review membership. Currently, about half of UCSF’s faculty members are eligible to participate in the Senate. Developing a new governance structure for UCSF would offer an opportunity to focus specifically on the interests and activities of the faculty who – unlike other UC campuses – are engaged solely in the health professions and basic and clinical scientific research.

“As we’ve thought about possible solutions, our guiding principles have been to achieve excellence, ensure accountability, remain committed to our public mission and respond quickly and efficiently to changes in our environment,” Desmond-Hellmann said.

The chancellor is proposing that bold, innovative and sustainable financial solutions be considered so that UCSF not only can survive, but can thrive in an era of dramatic changes in health care and advances in science.

She shared with the Regents high-level results of a recent analysis, including a look at UCSF’s financial projections.

“We’ve developed our first-ever integrated financial plan – capital and operating budget assumptions across the entire University, not just the medical center,” Desmond-Hellmann said. “Like all campuses, UCSF is suffering from severe cutbacks and this project is our first step toward understanding the severity and the implications for our future.”

That financial forecast shows that, without intervention, UCSF’s future is at risk. UCSF’s projected expenses are expected to outpace revenues in the year 2015 due to rising costs for employee pension and benefits, the impact of health care reform, the opening of UCSF Medical Center at Mission Bay and costs of making seismic upgrades to facilities.

“Costs are rising faster than revenues,” Desmond-Hellmann told the Regents. “This is unsustainable.”

The chancellor also explained that UCSF is significantly different from its sister campuses in the UC system since it is the only University dedicated solely to graduate-level programs in the tuition increases an impractical financial solution for UCSF. The chancellor already is working on other fronts – including making a personal contribution of $1 million – to increase financial support to both graduate students and students enrolled in its four professional schools of dentistry, medicine, nursing and pharmacy health sciences.

Revenue sources for UCSF’s $3.86-billion budget come primarily from the clinical enterprise (50 percent) and grants to the research enterprise (29 percent), she explained.

“UCSF is heavily dependent on two funding sources: our medical center and grants,” Desmond-Hellmann said. “Eighty percent of our revenue comes from these two sources, which both exist in an extremely competitive landscape.”

Unlike the other UC campuses, UCSF has a very small student population (fewer than 3,000 students) and only 1 percent of UCSF’s revenues come from student tuition, she added. Despite the challenges ahead, Desmond-Hellmann remains optimistic that UCSF can hold onto its vision of advancing science and delivering solutions to the millions of people who await new and improved ways to detect, treat and prevent disease.

“What's the next great idea that UCSF can come up with like what was done when the biotech industry was created? I don't know what is possible, but I have a lot of enthusiasm and confidence in our faculty and that they can provide benefit for the citizens and the underserved of California," Desmond-Hellmann said. 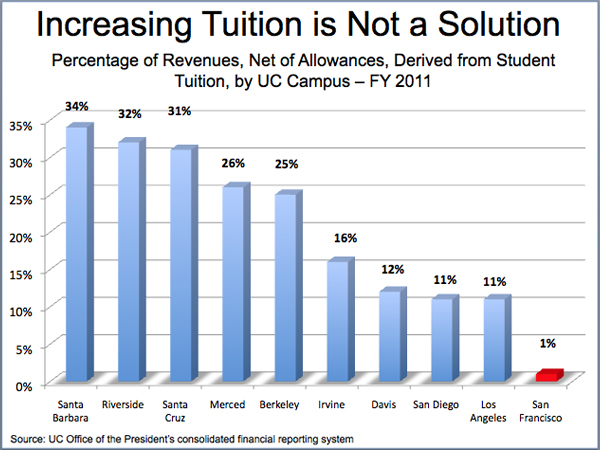 UCSF receives about 1 percent of its revenues from tuition as compared to its other sister campuses in the 10-campus UC system.