Scott Reeves turned 44 in early December, but if you looked at his resume you’d think he was at least 80.

Reeves, PhD, a world-renowned British social scientist, is the new director of UCSF’s Center for Innovation in Interprofessional Healthcare Education, which has started taking shape since his arrival from the University of Toronto late last year.

His 51-page resume includes 110 peer-reviewed papers, five books, 50 chapters and about 70 grants totaling more than $14 million. He is also editor-in-chief of the Journal of Interprofessional Care. 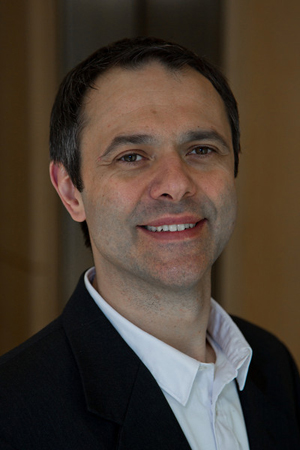 Reeves was born in Bristol and educated in London. When he left for Toronto in 2005, he was working at both City University and London South Bank University.

“The last six years have been incredibly productive,” he acknowledged. “I look at the London years as learning my craft.”

Reeves doesn’t sleep much, and drinks a lot of tea and coffee. He enjoys reading biographies and just finished one on Keith Richards of the Rolling Stones. Cleopatra is next. He also subscribes to Private Eye, a satirical British magazine, and has a taste for comedy. Although he’s 6-foot-2, he weighs only 175 pounds.

So is he a crazed workaholic?

"You're asking the wrong person,” Reeves said. “In health professions education there's been a lot of research on self-assessment. The findings indicate that we self-assess very, very poorly. You'd have to ask my wife. But I do a lot of work. I can't help myself. I enjoy writing. I enjoy figuring out problems. And in the last few years I’ve also been mentoring and developing young researchers. It seems that I’m moving into an avuncular stage of life.”

He and his wife, a schoolteacher, have three boys, ages 6, 7 and 9, who are going to school in San Francisco’s Sunset neighborhood, where the family is renting a house.

They were happy to relocate because there are plenty of Apple stores in the Bay Area, which all his boys love. As a fringe benefit, they will no longer have to wear snowsuits.

Climate was also a draw for Reeves, who couldn’t quite believe he was smelling jasmine in November during a walk in Golden Gate Park. The proximity of Napa Valley is enticing, too, because he loves red wine. The main attraction, however, is the quality of the faculty and students at UCSF.

Dealing with Issues of Quality and Safety

Reeves is a 17-year veteran of the interprofessional field, which goes back to the time of the Crimean War and the need for close nurse-physician collaboration, but has recently acquired cachet and a sense of urgency across the globe for dealing with issues of quality and safety. Still, at social gatherings, he has trouble describing his line of work.

“Even my parents don’t really know what I do,” he said. “I tell people that it’s about finding the best ways of delivering health care.”

He comes to UCSF as an academic-turned-administrator — a natural extension of his role as director of research at the Centre for Faculty Development, St. Michael’s Hospital at the University of Toronto. A top priority is finding a home for the center, most likely in Kalmanovitz Library on the Parnassus campus.

“I’m also very keen to get students on board as soon as possible and make sure their voice is heard,” Reeves said.

“A lot of work in interprofessional education across the world is run by enthusiasts,” Reeves said. “In many ways it’s like homemade apple pie — of course it makes sense. But we need to be thoughtful and measured about the way we do things. And we need rigorous evidence to share with the wider community that is more than just anecdote.”

UCSF Vice Chancellor for Student Academic Affairs Joseph Castro, PhD, interim dean of the Graduate Division, said, “Scott is exactly the right person to come in and work with the students, faculty and staff who share his commitment. We now have the right ingredients to create a center that will be unrivaled around the country and the world.”

“Getting students oriented to thinking in an interprofessional way is crucial to preparing them to serve the patients they will one day care for,” Mireles said. “This center is a great start to what I hope becomes the culture of UCSF.”