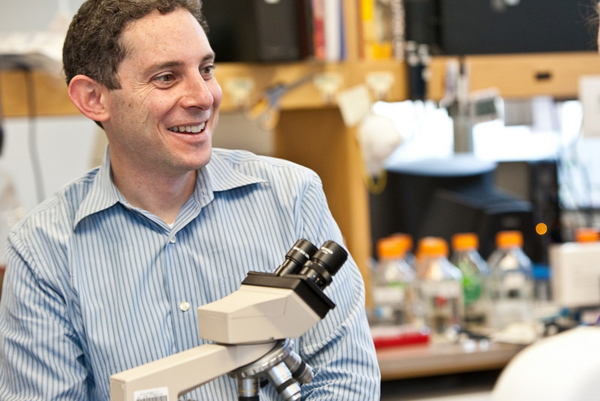 Look at the teeth on the lab specimen here. Is this the work of a mad scientist?

It’s true that UCSF’s Ophir Klein, MD, PhD, was quite satisfied to have produced mice with incisors that more closely resemble woolly mammoth tusks than the more modest choppers sported by your average Mus musculus. 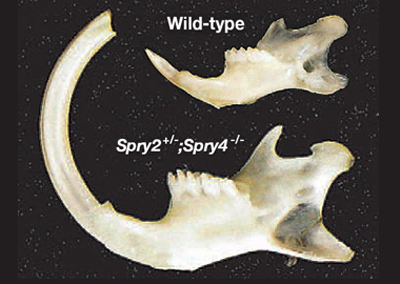 A mutation that affects stem-cell action in the development of mouse incisors – which grow continuously – results in abnormal development, excessive enamel deposition, and tusk-like incisors that are not worn down normally (bottom image). Photo by Ophir Klein, Development

And he is indeed a laboratory scientist – a fast-rising one and the recipient of a highly competitive, $2.3 million Director’s New Innovator Award fron the National Institutes of Health. But Klein also is a practicing medical geneticist, part of a UCSF clinical team that aims to better diagnose and treat dental and facial abnormalities in young patients.

The mouse studies are a way to learn more about how such disfiguring developments arise. Klein also hopes to use the knowledge gained to develop strategies for regenerating tissues, including teeth, for use in new treatments.

“The face is among the most affected parts of the body in terms of birth defects” – errors in the developmental program that affect appearance and sometimes vital functions, Klein said at recent symposium convened in honor of the late UCSF pioneer of medical genetics, Charles Epstein, MD. “It houses the sense organs, and determines the ability to feed and breathe. The face also greatly affects our sense of who we are.”

Abnormalities in teeth, in particular, are much more common than most physicians appreciate, said Klein, a faculty member in the schools of dentistry and medicine.

Making teeth is an ambitious goal, Klein says – but unlike some other tissues targeted by stem-cell therapy, a tooth might not need to be perfectly formed to function adequately.

But most fundamentally, Klein, who directs the Craniofacial and Mesenchymal Biology (CMB) Program at UCSF, studies teeth and other tissues to learn basic truths about how stem cells shape development throughout the body.

Klein wants to know how stem cells and their behaviors are molded in turn by cues they receive from surrounding cells. Mess with this orderly progression of signals, and you end up with tusks on mice and other unexpected outcomes. But the right molecular recipe could one day lead to new cell-based treatments for tissues lost to injury, disease or aging. 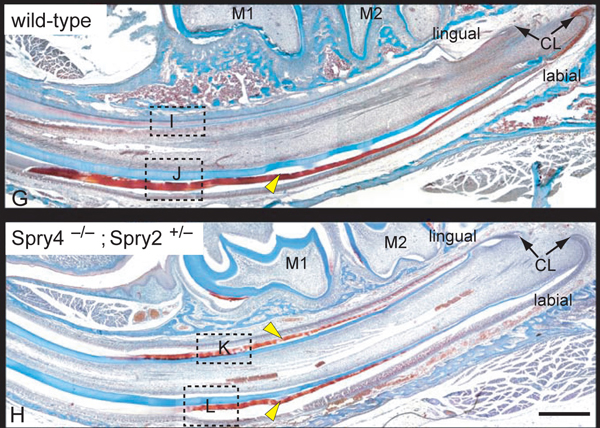 A mutant mouse abnormally produces enamel and grows tusk-like incisors. The red color and yellow arrow indicates enamel, which is present only on one side in the normal animal (top panel), but on both sides in the mutant animal (lower panel).
Photo by Ophir Klein, Development

The vast majority of human cells mature and specialize, and have no stem cell capabilities whatsoever. But humans, lab mice, and myriad other creatures can grow and repair injury thanks to small, self-renewing populations of stem cells. These vary in potential and potency, depending on developmental stage.

At one extreme are the much-talked-about embryonic stem cells. These can be obtained just a few cell divisions after sperm fertilizes an egg. Embryonic stem cells can give rise to virtually any cell type in the body.

The incisors of mice, unlike our own, grow continuously. For that the rodent can thank stem cells that last a lifetime. These stem cells also spin off cells that lose their stem cell characteristics. These cellular offspring instead give rise to specialized cells – the enamel-forming ameloblasts, and the dentin-forming odontoblasts. Early in life humans possess stem cells that similarly drive tooth development, but they become inactive after our adult teeth are fully formed during early childhood.

The tusked mouse is the result of tooth enamel run amok, the product of Klein’s manipulation of molecules that confer stem cell properties. The bottom half of a normal mouse incisor is made of enamel – the hardest component in the mammalian body. The top is made of dentin, another mineralized tissue, but one that is much softer. In human teeth, dentin is covered and protected by enamel.

But as the mouse chews its way through life, the unprotected dentin component of its incisors is abraded more easily than the enamel.  The teeth are worn down even as they keep growing. On balance, the teeth normally are maintained at a length that works fine for the mouse – but not in the mutant. Klein, together with his former mentor and stem cell trailblazer Gail Martin, PhD, tracked down the cause of the extra toothiness. The culprit is abnormal molecular signaling arising from specific genetic alterations. This abnormal signaling triggered activation of enamel-producing stem cells on all sides of the incisor, thereby preventing normal tooth wear.

Klein now has elaborated upon the experiments that result in such frightful dentition. In his most recent incisor study, featured Sept. 8, 2011 in the online journal PLoS ONE, Klein identified additional molecules that are responsible for unique properties of adult stem cells at the base of the mouse incisor. 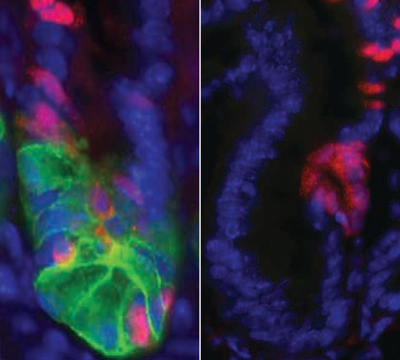 UCSF's Ophir Klein, MD, PhD, tracks molecules and cells during the development and regeneration of the intestinal wall to learn about stem cell capabilities. Photo by Ophir Klein, Nature

The molecules Klein identified are distinctive members of a class of molecules known as microRNAs. During development microRNAs naturally help to shape cell fate. Now researchers are exploring how they might also be used to manipulate cell populations of many types. Some of these microRNAs act similarly in different tissues. One of the microRNAs that Klein and his colleagues Andrew Jheon, DDS, PhD, and Chunying Li, MD, PhD, discovered was needed to activate stem cells in teeth was previously found to stimulate stem cells responsible for generating hair follicles.

Some of the same molecules that spur stem cells in the teeth to divide and renew themselves also act in the intestines, where cells live and die quickly, with the population on the gut surface turning over about every five days, Klein said.

Remarkably, by manipulating these molecules, Klein and his collaborator Fred de Sauvage, PhD, vice president for molecular biology at Genentech, discovered that in some situations our precious stem cells might be redundant. There is a type of stem cell in the gut that does not appear to do much unless another stem cell population once thought to be indispensible is wiped out. When that happens the normally laid-back stem cell population bursts into action and comes to the rescue, Klein, de Sauvage and their colleagues reported in a study published in the Oct. 13, 2011 issue of Nature.

Klein continues to study microRNAs and other molecules to better understand cell fates and potentialities, and how one type of stem cell population might diminish or expand depending on cues from the neighboring environment. He expects that what he learns will lead to new ideas about how to regenerate tissues for patients.

"The use of tissues regenerated outside the body from stem cells is still not ready for clinical practice in the treatment of craniofacial abnormalities,” Klein says. “But our knowledge of how distinct cell populations arise within us, expand and become specialized under the direction of stem cells is growing by leaps and bounds. I think the future is bright for medical advances based on this growing understanding."