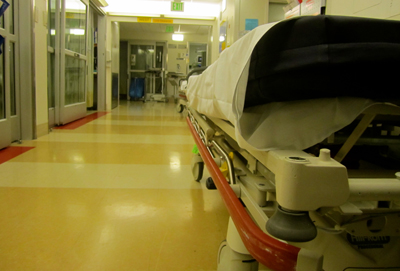 A gurney is available in the hallway, in case patients need to be transported to other areas of the hospital or if rooms are full.

Steven Polevoi, MD, has seen it all.

During his 23-year career, the medical director of the UCSF Emergency Department has done everything from treat traumatic injuries to deliver babies. While medical emergencies occur throughout the year, Polevoi sees the winter season and its related overindulgence as a pivotal time for preventing emergencies by listening to our bodies.

“People tend to delay care around the holidays,” said Polevoi, whose emergency medicine team treats about 3,000 patients every month. “They may have symptoms of cardiovascular disease such as abdominal or chest discomfort which they interpret as indigestion or overeating, but in fact it could be cardiac ischemia.”

Cardiac ischemia -- which could lead to a heart attack -- occurs when blood flow and oxygen to the heart are dramatically reduced by narrowing of the coronary arteries. Symptoms include discomfort in the upper abdomen or chest that is often described as a heavy sensation or pressure, like “an elephant sitting on my chest.”

“You meet the patient and they tell you their story,” Polevoi said. “You say, ‘Why didn’t you come sooner?’ and they say, ‘Well, I was traveling or I was having a party.’ These can be subtle symptoms patients interpret as something other than a serious condition.”

People can sometimes confuse a serious heart condition with acid reflux or heartburn – especially around the time of holiday feasting -- because the symptoms are similar.

Heart-related deaths increase by 5 percent during the holiday season. Fatal heart attacks peak on Christmas, the day after Christmas, and New Year’s Day, according to a national Circulation study published in 2004. 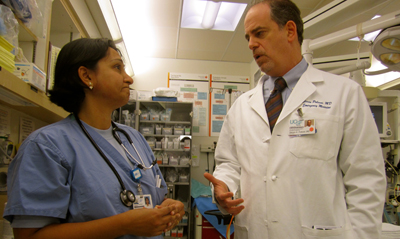 “There’s a mantra in emergency medicine and cardiology that time is muscle,” Polevoi said. “What that means is the longer the time that there’s lack of coronary blood flow, which is the cause of the vast majority of heart attacks, the more damage there is to the heart. Often patients come in with discomfort and by series of tests, we find out they’re having a heart attack and they’ve already suffered a significant amount of damage to the heart muscle and that’s what leads to the problems.”

Cardiac ischemia could lead to more heart damage if it’s not treated quickly. Insufficient blood flow to the heart muscle can lead to congestive heart failure, end-stage heart disease and even death. Overeating and stress typically associated with the holiday season could exacerbate existing conditions.

“The holidays are a time when we really increase the amount of salt and fat we eat.  Most people don't notice the difference.  However, there are certain people -- for example, those with heart failure -- for whom the slight increase in salt intake could result in big problems,” said Ameya Kulkarni, MD, a cardiology fellow with the UCSF Division of Cardiology.  “And if your heart is already working hard to get oxygen because of narrowing of coronary arteries, then stress will tax your heart, and that demand for more oxygen could cause ischemia or even a heart attack.”

Another excess that fills the emergency room during the winter holidays involves binge alcohol consumption. Last New Year’s Eve, the UCSF emergency department experienced a 50 percent jump in the number of ER visits from the year before. Of that, 70 percent were for alcohol intoxication. That number has steadily risen over the past few years.

Typically these patients are so intoxicated that they aren’t able to walk or talk. They can lapse into unconsciousness, have trouble breathing and sometimes even die. 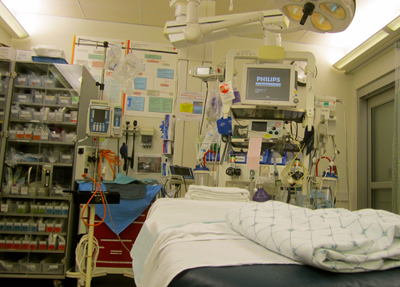 The trauma suite is prepped and ready for traumatic emergencies.

“There’s a lot of morbidity associated with binge drinking and the holidays are an excuse for people to drink too much,” Polevoi said.

This influx of intoxicated patients can stretch resources at a typical emergency room, because there is no antidote to alcohol intoxication.

“We must wait until their blood alcohol level decreases and that’s a slow process,” Polevoi said. “Basically we are left with lots of patients in semi-conscious states. They often spend six or eight hours with us until they’re sufficiently sober to go home.”

Doctors and nurses must monitor these patients while treating other non-preventable emergencies that bring people to the ER.

“People ought to have a good time on New Year’s Eve but drinking responsibly means a lot not only to yourself but to other individuals as well,” Polevoi said. “If you become so intoxicated that you lose consciousness and need to be transported to an emergency department, that has an impact on other patients. As with most things, know your limits and listen to your body.”