In the last three decades, thousands of women with breast cancer have taken the drug tamoxifen, only to discover that the therapy doesn’t work, either because their tumors do not respond to the treatment at all, or because they develop resistance to it over time. Now researchers at the University of California, San Francisco (UCSF) have discovered the molecular basis for tamoxifen resistance and found a potential way to defeat it. 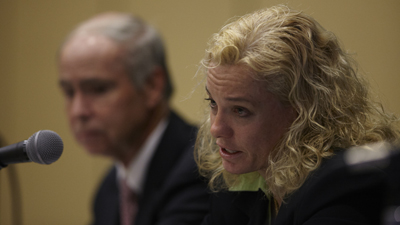 On Nov. 13, 2011, at the AACR-NCI-EORTC International Conference: Molecular Targets and Cancer Therapeutics, UCSF oncologist Pamela Munster, MD, and her colleagues will present the results of clinical studies and laboratory experiments that show how some tumors resist tamoxifen and how this resistance can be overcome by administering a second class of drugs.

“Understanding the mechanism of tamoxifen resistance and how to defeat it may help a large number of women with hormone-resistant breast cancer,” said Munster. “It may lead quickly to new, more effective treatment strategies and may help to identify biomarkers to help to gauge whether or not someone will respond to treatment in the first place.”

The results will be presented at a press conference at 7:30 a.m. (PST) in room 2004 of the Moscone Convention Center in San Francisco.

The National Cancer Institute estimates that more than 200,000 Americans are diagnosed with breast cancer every year. It is the second leading cause of cancer death among American women, claiming more than 40,000 lives in 2009 alone.

About 65 percent of women with breast cancer have tumors that, when examined in biopsies, show signs of co-opting a naturally occurring molecule in the human body called the estrogen receptor. This receptor helps to stimulate the proliferation and growth of cells – something that is normally tightly controlled in the body.

Tumors can use the machinery of this receptor to stimulate the unregulated growth and proliferation of cancer cells. Doctors have known for decades that this is one of the main drivers of breast cancer, and elevated levels of estrogen receptor is something oncologists look for when they take tumor biopsies.

Tamoxifen, which blocks the estrogen receptor, is the front-line treatment for premenopausal women whose breast cancer biopsies show elevated levels of the receptor. It can be something of a wonder drug when it works, inhibiting cancer growth and shrinking tumors without the same side effects as chemotherapy.

However, tamoxifen only works in half the women to whom it is prescribed. It may not work in some women because they may have forms of cancer in which the estrogen receptor does not actually play a central role. However, many women taking tamoxifen acquire resistance to it. Their tumors respond to the treatment at first, but then the cancer rebounds and develops the ability to proliferate and grow even when the estrogen receptor is blocked.

While doctors have documented cases of tamoxifen resistance in the clinic for decades, nobody knew exactly how the cells were able to acquire resistance. Many scientists thought that genetics were to blame – certain variations in one’s DNA that would pass from parents to children and make one more likely to develop a tamoxifen-resistant form of breast cancer. According to Munster, that is not the case.

“We always thought that resistance was genetic,” said Munster. “But now we have discovered that cells have a way of developing resistance by means of epigenetic modification.”

Epigenetics is a general phenomenon in biology that explains how some cells, tissues, and whole organisms can acquire traits that go beyond mere genetic differences. Rather than genes being mutated or changed and then passed on to offspring, which is the domain of genetics, epigenetic changes are not in the genes themselves but in their levels of expression and activity.

Queen bees, for instance, are genetically identical to worker bees, but they are much larger and characteristically quite different. Genes don’t account for these differences – epigenetics does. Queens start out life the same as workers, but they are fed a steady diet of chemicals in their food that alter the levels of expression and activity of their genes, and over time these changes account for their queenly form.

According to the research Munster and her colleagues are presenting this week, it is a similar epigenetic story that accounts for tamoxifen resistance. They discovered that when cancer cells are fed tamoxifen, they sometimes respond by elevating expression of a gene known as AKT.

AKT is a “survival” gene that in normal situations helps to stimulate growth and proliferation of cells and prevent cells from dying. In breast cancer, however, it can become overactive and confer resistance by allowing the cancer cells to continue to use the estrogen receptor even in the presence of tamoxifen.

The good news clinically, said Munster, is that several existing compounds known as histone deacetylase inhibitors directly target AKT. Two of these are already approved by the U.S. Food and Drug Administration for treating a rare type of lymphoma. Several more are actively under development and at least one is in early clinical trials, said Munster.

She and her colleagues showed that when cells in the laboratory are fed these histone deacytalase inhibitors, their levels of AKT are knocked back. Giving the same cells tamoxifen at the same time dramatically curtails the ability of the cells to proliferate.

In clinical studies published earlier this year, Munster and her colleagues also showed that taking both drugs together can reverse tamoxifen resistance.

This approach will have to prove safe and effective in additional, large-scale clinical trials before it becomes generally available.