Mitchel Berger, professor and chair of the Department of Neurological Surgery, left, talks about caring for patients with brain cancer and their caregivers during a panel discussion featuring Vicki Kennedy, right.

Now the Department of Neurological Surgery at UCSF is seeking to improve care for people with brain tumors by actively engaging patients’ families, friends and others who take a central role in helping their loved ones through brain cancer. When people with brain tumors are treated at UCSF, new programs in this department will aim to increasingly engage and embrace these “caregivers,” helping them to fulfill their needs.

"To effectively confront cancer, future hospitals and clinics will have to take every possible approach – whether that means training the best doctors, offering the most skilled surgeons and oncologists, designing and testing new drugs and therapeutic approaches, or engaging patients and caregivers on every level," said UCSF Chancellor Susan Desmond-Hellmann, MD, MPH, who kicked off a special event focused on patients and caregivers this month on the UCSF Mission Bay campus.

"UCSF's Department of Neurological Surgery is a great example of how it's possible for a truly comprehensive approach like this to come together under one roof," she added.

Hosted by the Department of Neurological Surgery and the UCSF Helen Diller Family Comprehensive Cancer Center, the caregiver event featured a panel headlined by Vicki Kennedy, an attorney, health care reform advocate, and caregiver; and Mitchel Berger, MD, professor and chair of the department. One of the world's top neurosurgeons, Berger leads one of the best neurosurgery programs in the country, according to US News & World Report. 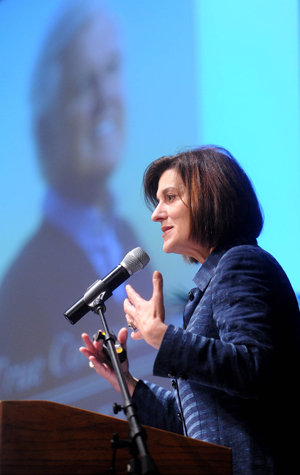 For 15 months, Kennedy was caregiver to her late husband, Sen. Edward M. Kennedy, who was diagnosed with brain cancer in May 2008, after he suffered a seizure one morning when they were ready to take the first sailing trip of the season from their Hyannisport home. It was a moment Mrs. Kennedy would not forget.

Kennedy described the day as a roller coaster as it unfolded. She went on to discuss how much she and the late senator accomplished in the next 15 months, voting on a Medicare bill, giving a speech in Denver at the Democratic National Convention, and attending President Obama's inauguration in 2009.

While she was focused on him and his well-being, he was focused on continuing to fulfill his responsibilities as a longtime public servant. He did not shy away from his prominence in the public eye, even though the news reports surrounding his health status amplified media scrutiny.

Though this aspect of their story was uniquely different from anyone else’s in the audience, Kennedy sought throughout her talk to emphasize the common ground she stood upon with the other caregivers and cancer patients at the UCSF event.

The Need to Engage Caregivers

In introducing the panel, Berger reflected on how as a surgeon, he was always focused on safely and effectively removing brain tumors in the operating room. A few years ago, however, the husband of one of his patients turned his thinking around by pointing out that while his wife received great care, nobody was seeing to his needs, as caregiver.

“He challenged me,” Berger said. “I started to think about it, and I began to realize that we have been remiss as physicians in our responsibility for caregiving.”

In response to this conversation, Berger and his colleagues won a grant from a private foundation to make a training video aimed at patients and their loved ones that explored the topic of how to be a good caregiver. They sent this video to every neurosurgeon and neuro-oncologist in the country. That was only the beginning.

Addressing caregivers’ needs is complex and demands individual attention. They take on a large, central role in helping their loved ones through brain cancer. The disease often burdens them with demanding and time-consuming responsibilities. They sometimes face fundamental treatment decisions over the course of multiple surgeries and rounds of chemotherapy. more often than not ultimately end with the death of their loved one.

Because of the weight of this responsibility, the Department of Neurological Surgery is committed to doing whatever it takes to help caregivers.

Moreover, research has shown that identifying and addressing the needs of caregivers will improve care for patients. Earlier this year, department neuro-oncologist Susan Chang, MD, published a report on a major clinical study outlining the needs caregivers experience as they help their loved ones through treatment for a brain tumor. One of the main issues caregivers identified was the need to have comprehensive but easily-digestible information available to help them understand the disease, its treatment and the ways in which they can help their loved ones. Many of the study participants reported feeling untrained and unprepared for their new roles.

Guided by the findings of the report, the Department of Neurological Surgery has been exploring ways to build better support for caregivers into the standard of care for brain tumor patients. The department plans to hire staff including nurses, social workers and patient relations liaisons to assist both patients and caregivers with the issues that arise. It also is creating a new training program to help UCSF faculty and staff build stronger relationships with patients and their caregivers. In addition, the department plans to create a Family Advisory Panel to identify the most helpful programs for the future.The panel last week was the first such program.

Sullivan told the audience of her own experience being diagnosed with a brain tumor when she was a child growing up in Washington. She had several surgeries, which Berger and his team performed when he was a surgeon in Seattle, before he came to UCSF. She reflected that there is one thing that brings all the faculty, staff, patients, and caregivers together.

“We have one common goal,” said Sullivan. “To find a cure for this horrible disease.”

After Sullivan, Page spoke about the many issues facing patients and caregivers during the course of treatment and some of the things that she and others in the Department of Neurological Surgery do to provide for them.

Quality of Life and Other Caregiver Challenges

For the Kennedy family, this commitment to continuing to live life to its fullest started with taking that trip aboard their sailboat as soon as the senator was released from the hospital and continuing to sail and engage in other activities in the coming months.

Berger witnessed this firsthand. He was brought in to consult with the Kennedy's shortly after the senator's diagnosis and throughout the 15 months. “As the story unfolded over the course of the year, I learned a lot about Vicki Kennedy and Senator Kennedy,” Berger said. "What I learned was they didn’t stop living."

According to Kennedy, her husband’s positive approach was not merely motivated by a personal desire to live life to its fullest. It also informed by a lifetime of public service.

“Teddy felt so strongly that he had an obligation to do everything he could to be a rolemodel for people who were facing a terrible diagnosis," Kennedy told the audience. "He thought that maybe his treatment could advance cancer research – or maybe his positive approach to life could help someone else live just one happier day.”

In concluding the panel, Kennedy repeated the words of the late senator, speaking one of his favorite quotes.